The Arthur Fiedler Statue Got a Bruins Helmet

The Esplanade statue is decked out for the Stanley Cup. 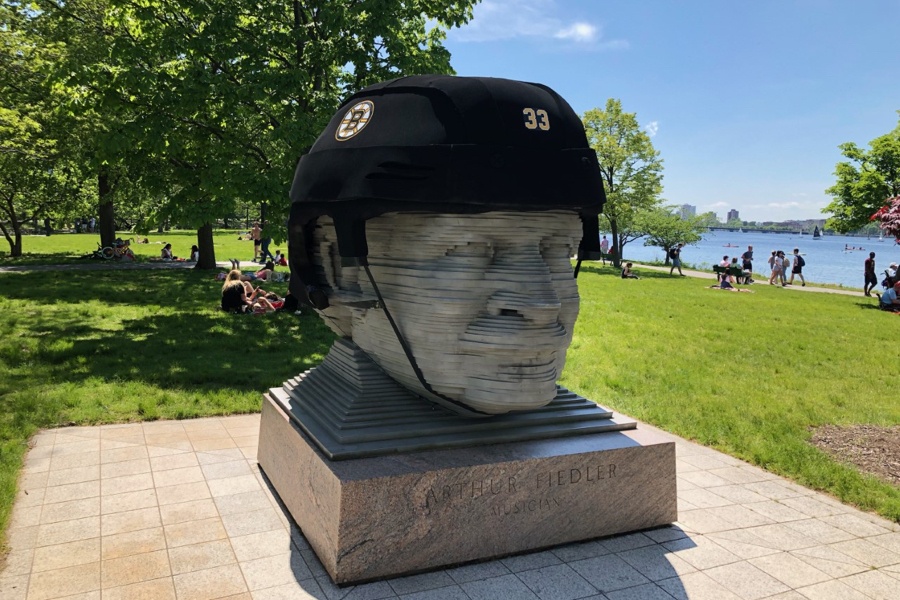 With the Stanley Cup finals now in full swing, the entire city is showing its black and gold. Even the Arthur Fiedler statue, built to honor the beloved Boston Pops conductor who passed away in 1979, is decked out.

A 17-foot-wide edition of a Bruins helmet appeared on Fiedler’s stony head Monday, ahead of Game 1 of the series. If it was meant as a good luck charm, it worked: The Bruins took the game, 4-2, over the St. Louis Blues.

The nonprofit Esplanade Association is behind the massive headgear, and behind most of the general management of the 3.3-mile park. A garden of yellow and black flowers also showed up on the Esplanade last week.

Fiedler’s statue honors the work he did to bring music out of Symphony Hall and onto the Esplanade. Now, he always has a prime spot on the Charles, where he can hear the Pops and be visited by generations of fans.

The impressive helmet, #33, was made by Allston’s Heritage Flag Co. It has five sturdy layers, specially designed to keep the statue protected and to make sure it doesn’t slip off if a wandering Blues fan tries to forecheck him.

Fiedler is no stranger to hats. STIK, a knitwear company also based in the Boston area, made the statue a custom Red Sox beanie for the 2018 World Series. We all know how that championship turned out—hopefully foreshadowing what’s about to go down against St. Louis.

The Bruins came back from a 2-0 deficit Monday night. Four unanswered goals in the second and third periods sealed the Game 1 victory and set the tone for the rest of the series.

They play Game 2 at the Garden Wednesday night, then head out to St. Louis to test their road skills.