Only a handful of states outside New England know what's what. 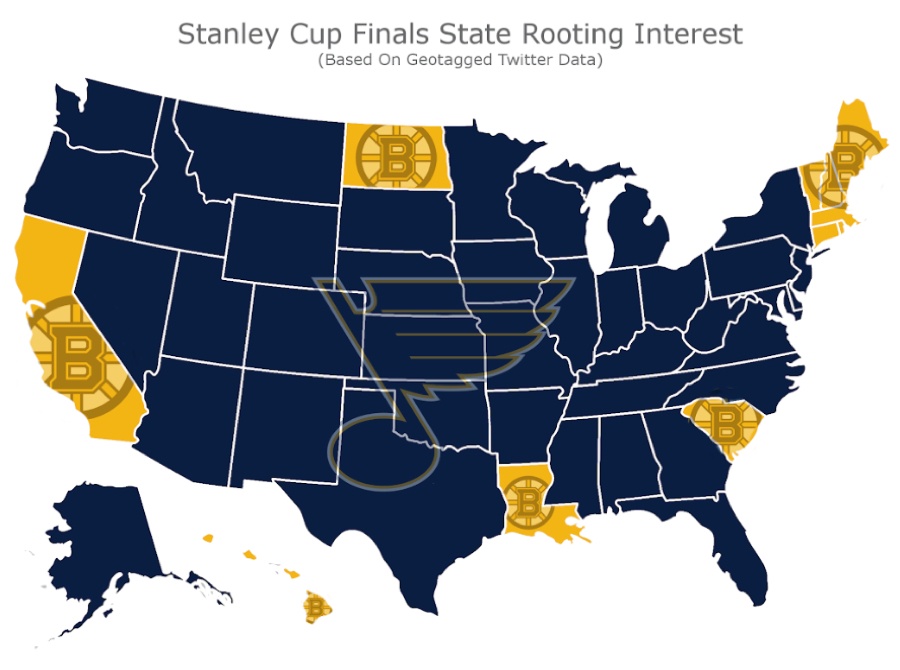 New England sports fans are not exactly known for giving a rat’s ass what the rest of the country thinks of our teams, so gonna go out on a limb and guess this won’t bother any of you. But a new map sourced from social media data shows that when it comes to the Stanley Cup, the vast majority of states are rooting against the Bruins.

The potentially legit gambling website sportsbettingexperts.com crunched the numbers on 40,000 tweets, comparing the number of tweets in favor of Boston—for example, tweets with the hashtag #gobruins—to those that showed preference for the St. Louis Blues, like #weallbleedblue. A spokesman tells me the website used the social media-scraping tool Trendsmap to reach its conclusions.

Outside of New England, which is decidedly Bruins country, apparently only a handful of other states are siding with the B’s: California, Hawaii, Louisiana, South Carolina, and North Dakota. The other 39 of these United States are bleeding blue.

Quick shout out to the North Dakotans, by the way: For whatever reason, our buddies in that wildly random state seem to love being on Boston’s side. Ahead of the 2018 Super Bowl, North Dakota was allegedly the one and only state that sided with the Pats.

Is there some anthropological reason that landlocked North Dakotans, at least the ones who spend time tweeting about sports, feel an allegiance to the City of Champions? I don’t know and am not going to investigate it any further than that, so once again what’s up Roughriders?