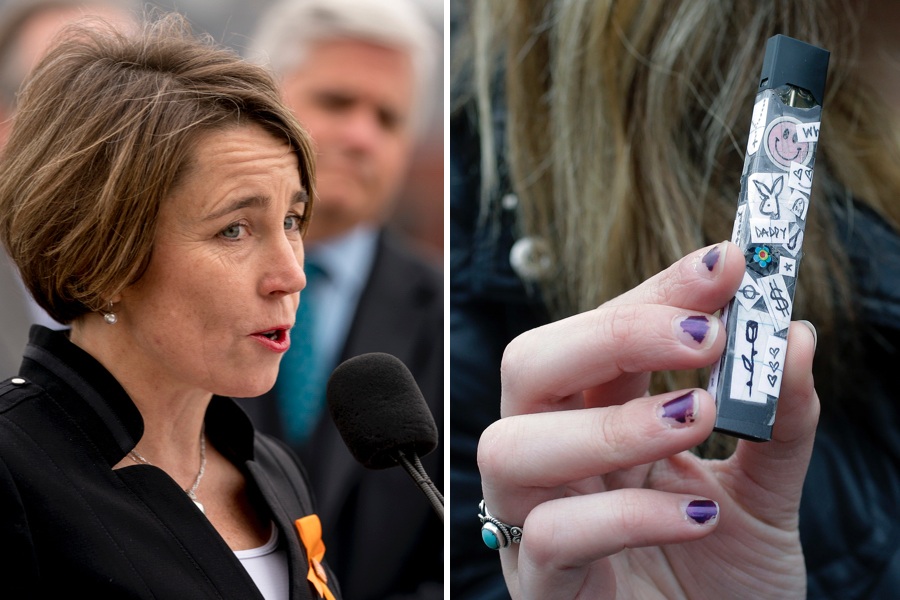 As the use of e-cigarettes exploded in popularity among teenagers in Massachusetts and around the country, Eonsmoke enlisted help from influencers, and used hashtags, memes, and cartoons to hawk fruit- and cereal-flavored liquids laced with nicotine. In one post on Instagram, it shared an image of one of the sleek rectangular Juul vaporizers, which are often mistaken for memory sticks, along with this caption: “Mom! It’s a USB drive!!” And all the while, it wasn’t checking IDs.

That’s according to a lawsuit filed Wednesday by Massachusetts Attorney General Maura Healey against the national vape retailer, accusing the New Jersey-based company of blatantly marketing its products to children using Instagram, Snapchat, and YouTube. Her office is now seeking an injunction, as well as civil penalties.

NEW: @MassAGO files first lawsuit in connection with her investigation of the e-cigarette industry, charging Eonsmoke LLC with failing to verify the age of online buyers and targeting minors through social media. pic.twitter.com/pxcrw9cbZQ

The company, which makes and sells e-liquids and vaping devices, “willfully and repeatedly violated the state’s consumer protection law by using a marketing campaign that directly targeted underage consumers,” Healey’s office said Wednesday, according to the Boston Globe. “Eonsmoke took a page out of the Big Tobacco playbook by peddling nicotine to young people on social media,” she added in a statement to the Globe.

Healey says that while the company targeted kids online, it often obscured the fact that its sweet and colorful products contained an addictive substance, and did not require age verification for purchases. On Twitter, she shared photos gleaned from the company’s Instagram account, including one in which it declared it was “The official vaping brand of Snapchat.”

Eonsmoke’s marketing campaign was designed to reach young people and get them hooked. On Instagram, Snapchat, and YouTube, the company used memes and cartoons to appeal to kids and intentionally minimized or omitted that its products contain nicotine. pic.twitter.com/81s1tAnDha

In a statement to the Globe, Eonsmoke says it has cooperated with Healey’s office and has taken steps to combat youth vaping, including “enacting strict age verification.” It also says it no longer sells its products online to customers in Massachusetts.

The lawsuit comes after Healey announced last year she would investigate Juul, the dominant player in the vaping marketplace, for also allegedly targeting kids in advertising. Juul denies this, and has been waging a campaign to bolster its image as a product designed to help adult smokers stop smoking cigarettes. As part of that effort, it recently hired Massachusetts Attorney General Martha Coakley to its government affairs team.

Last year Massachusetts raised the minimum age for buying e-cigarette products from 18 to 21.