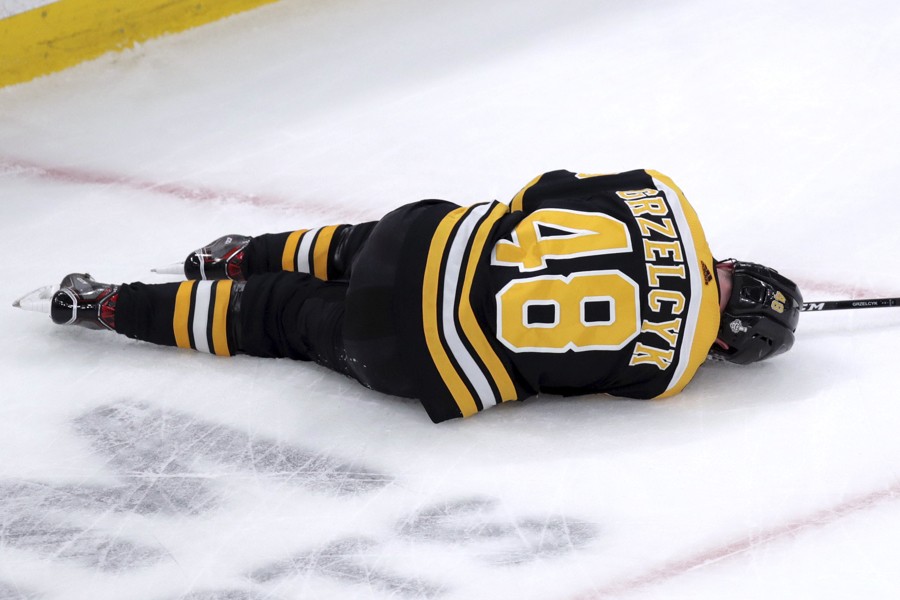 Boston Bruins’ Matt Grzelcyk lies injured on the ice during the first period in Game 2 of the NHL hockey Stanley Cup Final against the St. Louis Blues, Wednesday, May 29, 2019, in Boston. (AP Photo/Charles Krupa)

We all saw it: In the heat of the first period Wednesday night, the St. Louis Blues’ Oskar Sundqvist smashed right the hell into the back of Bruins’ Matt Grzelcyk’s head, bonking it into the boards. Hard.

A look at the hit on by Oskar Sundqvist on Matt Grzelcyk. Didn’t look good. pic.twitter.com/3yjlbhgkvs

Grzelcyk collapsed grabbing his head, had trouble getting back up, and, after undergoing tests at a hospital, didn’t return to the game. It was pretty ugly. Sundqvist was ultimately given a two-minute penalty for boarding. But was it serious enough to merit more punishment than that?

Guess we’re about to find out. The NHL Department of Player Safety announced Thursday that it would hold a hearing with Sundqvist. It didn’t say when the hearing would be held.

For his part, former Blues captain and current Bruin David Backes told reporters Thursday he didn’t like what he saw, either. “I don’t think that’s a hit we want in our game,” he said.

David Backes was not a fan of Oskar Sundqvist’s hit on Matt Grzelcyk (@TDBank_US) pic.twitter.com/sOF1QbUorW

The Bruins and the Blues face off in Game 3 of the Stanley Cup Final on Saturday.

Update: The team has announced that Grzelcyk is in concussion protocol and will not be joining the Bruins as they head to St. Louis.