The Red Sox Are Flying David Ortiz to Boston for Treatment

He's expected to arrive in the city later tonight. 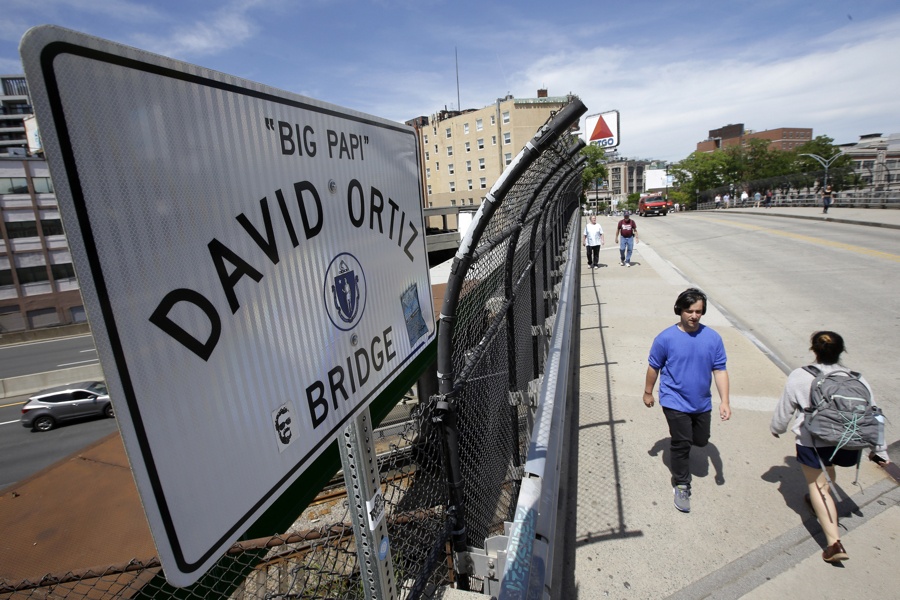 Passers-by walk over a bridge named for former Boston Red Sox slugger David Ortiz near Fenway Park, in Boston, Monday, June 10, 2019. Ortiz was ambushed by a man who got off a motorcycle and shot him in the back at close range Sunday night in his native Dominican Republic, authorities said. (AP Photo/Steven Senne)

David Ortiz will be flown back to Boston “as soon as possible” to undergo treatment here after he suffered a gunshot wound in the Dominican Republic, Red Sox leadership said Monday.

The beloved slugger is expected to arrive in the city as early as this evening, the officials said, and he will be taken to Massachusetts General Hospital.

“Our medical team here in Boston and the doctors in the Dominican Republic have confirmed that David’s condition is still serious, but that he is stable enough to be transported back here to Boston for continued care,” Red Sox President and CEO Sam Kennedy said in a Monday afternoon press conference. “In coordination with our medical team, the club has arranged for a medical air ambulance to transport David to Boston from Santo Domingo. Our hope is that David will arrive here in Boston sometime later tonight.”

Ortiz suffered serious injuries and underwent several hours of surgery after he was shot in the back while at a bar in Santo Domingo Sunday night. Security footage appears to show a man arriving on a motorcycle, pointing a gun at Ortiz, and firing. A suspect, identified as Eddy Vladimir Féliz García, has been arrested. A second suspect was still reportedly on the run.

Witnesses said the bullet entered Ortiz’s back and exited out his stomach. Dominican authorities described his condition as stable. Reports emerged that Ortiz suffered damage to several organs, including his colon and liver—injuries that experts in Boston told the Boston Globe today could in fact be life-threatening.

Support has been flowing in from teammates, friends, and prominent figures with ties to the larger-than-life sports figure, including President Barack Obama, friend and former Red Sox pitcher Pedro Martinez, and Bruins goalie Tuukka Rask.

In an earlier statement, the Sox had said earlier offered Ortiz’s family “all available resources to aid his recovery.”

Speaking to reporters Monday, Kennedy reflected on the role Ortiz played after the Boston Marathon bombings, when he delivered his famous speech at Fenway Park.

“We all remember that in 2013, when we needed David Ortiz the most, he was there for us in late April,” he says. “And so its’ appropriate and expected that this community would rally around David when he needs us the most.”