Commuters had plenty of time to stew over the rate increase on a truly awful morning. 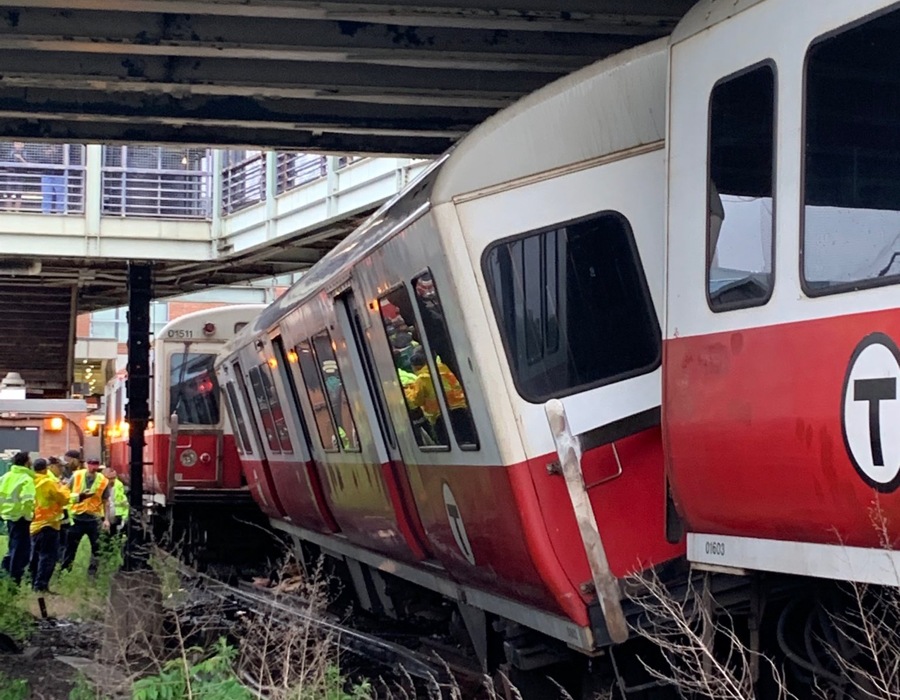 Update: Hours after a derailment brought much of the Red Line to a standstill Tuesday, the MBTA announced at 4:45 p.m. on Tuesday that service to Braintree and Ashmont stations on the Red Line has resumed. Commuters on the Braintree branch will need to get off at JFK/UMass to switch trains, the T says, noting that all trains traveling through JFK will do so slowly as a safety precaution.

The Commuter Rail will be running with additional trains on the Middleborough/Lakeville, Kingston/Plymouth, and Greenbush lines, which the MBTA says can be accessed with a CharlieCard or CharlieTicket.

Earlier: With fewer than three weeks before fares on the MBTA are set to go up, another disaster snarled the morning commute on Tuesday, this time an early morning derailment on the Red Line on a crummy, rainy morning.

By Tuesday afternoon, a disabled Red Line train remained in place on the tracks, and the T said it wasn’t sure when the Red Line would return to regular service.

The trouble began at around 6:10 a.m., when a southbound Red Line train car hopped off the tracks at the JFK/UMass stop. Of the 60 people evacuated from the train, only one sustained injuries, which were described as minor, according to the Boston Fire Department.

We evacuated 60 people from the trains, all were able to walk off. There was one person with a minor injury who refused transport by ⁦@BOSTON_EMS⁩ . pic.twitter.com/c5Rl1DGjQL

MBTA shuttle buses are full as commuters deal with delays/detours caused by the Red Line derailment near JFK/UMass #wcvb pic.twitter.com/n2KldPF0hP

MBTA General Manager Steve Poftak, speaking to reporters with the disabled train behind him Tuesday afternoon, said it was not clear when the car would be righted and the tracks cleared—a complicated process that requires cranes.

He also said a third-party investigator would be brought in to examine a recent series of derailments on the T. While he assured riders that “the system is safe,” he said he wants “a fresh set of eyes on this to make sure we’re not missing something.”

For the evening commute, the Commuter Rail will be adding service along the Middleborough/Lakeville, Kingston/Plymouth, and Greenbush lines, which the MBTA says can be accessed with a CharlieCard or CharlieTicket.

The @MBTA_CR will provide additional service until further notice:

Customers can use a CharlieCard or CharlieTicket to board.

Commuters hoping to avoid the chaos by taking a ride-share may be out of luck. Those who tried to use Uber and Lyft this morning were confronted with skyrocketing surge pricing on the apps, with fares jumping to more than $100 for even short trips, according to an analysis in the Boston Globe.

When the @MBTA suggests you take alternate transportation! Hahahaha can I bill you for this ridiculous @Uber_BOS ride? #mbta #redline #MBTAFAIL pic.twitter.com/CkQKl80PMX

This was only the latest derailment seen on the T in recent weeks. Over the weekend, a Green Line train derailed in the Kenmore area and injured 11 people, an incident the T has said was the fault of a train operator, who has been suspended. Poftak said Tuesday that the two derailments, just a few days apart on two separate MBTA lines, were related.

Another Red Line train derailed at Ashmont two weeks ago. Also this year, a Green Line D Branch train derailed the morning of the Patriots victory parade, and two Commuter Rail trains derailed in April, once on the Rockport/Newburyport Line and once on the Fairmont Line at South Station.

Boston Mayor Marty Walsh in a tweet on Tuesday called the derailments “unacceptable.”

This week’s @MBTA derailments are unacceptable. We need answers, solutions & more funding, and we need it now.

It is imperative that we have a public transportation system for Boston residents and surrounding communities that is safe and reliable.

Poftak said at the press conference that the T takes these incidents seriously. “We hear very clearly and we understand very clearly that the situation with these derailments is not acceptable and we are taking steps to address that,” he said.

And that fare increase? It’s a 6 percent bump, set to take effect on July 1.