Day 2 of an MBTA fiasco brings slowdowns, crowds, and those dreaded shuttle buses. 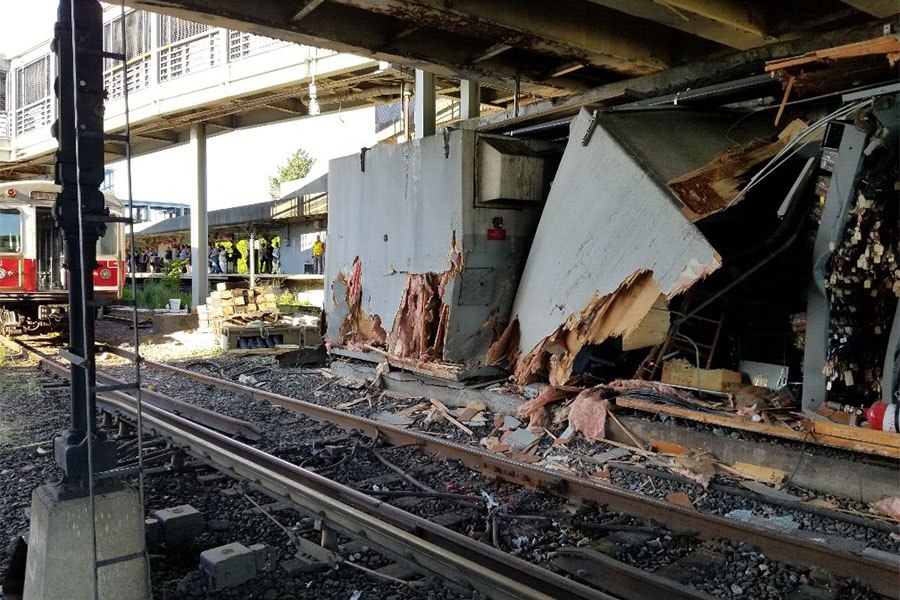 In the wake of yesterday’s disastrous Red Line derailment, the MBTA has announced that Red Line rail service between North Quincy and JFK will pause around 11 a.m. today. Shuttle buses will be in use until service resumes around 1 p.m.

The shutdown will allow time for crews to remove the train car that derailed yesterday, which is still in place, and begin to repair the damage the Red Line’s system sustained.

According to a Twitter update from the MBTA earlier this morning, the train that derailed struck several “signal bungalows” at JFK, damaging the train’s signal system. Without the system, trains cannot be tracked and countdown clocks and GPS apps cannot predict when trains will arrive. For the time being, trains have to be granted permission from the Operations Control Center to travel from station to station one at a time. Additionally, MBTA workers will now be physically setting the routes for the trains.

The commute for Red Line riders was thus sluggish this morning. Because the tracks around the derailment are still out of commission, Braintree branch riders also had to exit their trains at JFK, cross a pedestrian bridge to the Ashmont side, and board Ashmont trains to get to South Station.

@MBTA passengers at porter can’t even get on the trains- how should we get to work? If redline trains still aren’t running normally, adding shuttle busses would be a good alternative, or at least not charging for this poor level of service. pic.twitter.com/JdzRyZAj04

Great job @MBTA. SB train finally gets to Davis and most trains are already full. How much long will it take for the repairs bc the red line is unusable. pic.twitter.com/Wz9Z5wsZwN

The MBTA has asked patrons to be patient as the system is repaired.

“Looking ahead, bungalows will need to be rebuilt, new signals & cables installed, tracks repaired,” the MBTA tweeted. “At this time, we can’t say how long that will take. For now, trains will continue to travel at slower speeds. We ask customers to allow extra time & use all available services. We know this is a big ask. We sincerely appreciate all our riders’ understanding and patience while crews work around the clock to fix this. We promise to keep updating you as more info becomes available.”

According to a report by the Boston Globe this morning, the MBTA is ranked as one of the nation’s worst metro transit systems for derailments. The MBTA’s record—43 derailments in the past five years—is surpassed only by that of the New Orleans Regional Transit Authority, a smaller streetcar system. Yesterday marked this year’s fifth derailment, putting the T on track for the most derailments in a decade.

The subway and LinkPass fare increase, however, remains set for July 1.