A local leader of Immigration and Customs Enforcement is weighing in on the controversy. 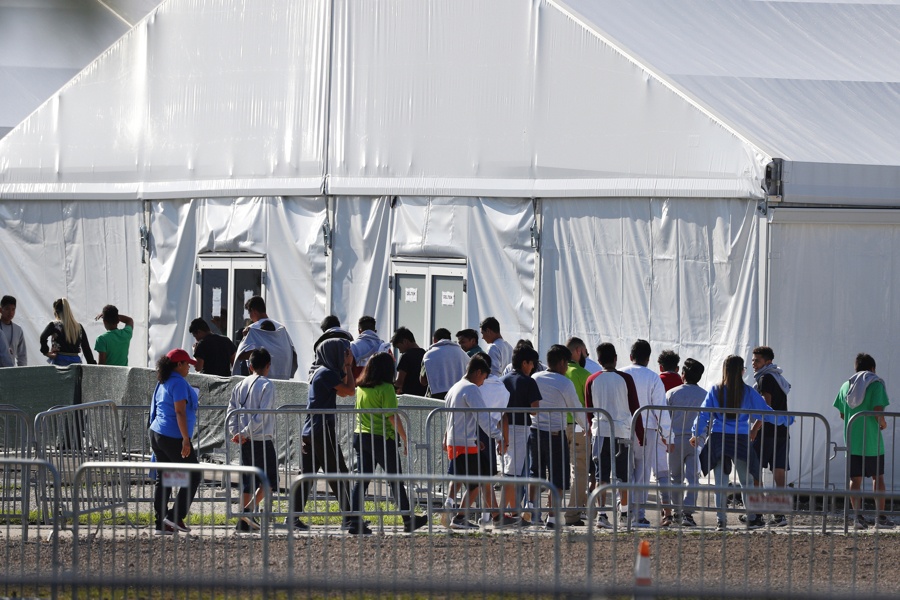 FILE- In this Feb. 19, 2019 file photo, children line up to enter a tent at the Homestead Temporary Shelter for Unaccompanied Children in Homestead, Fla. (AP Photo/Wilfredo Lee, File)

What do you call those places built along the U.S. border to detain thousands of immigrants, including children, amid a surge in migration from Central America?

If you’re Alexandria Ocasio-Cortez and others who’ve used strong words to criticize the government facilities, you call them “concentration camps.” But if you’re a top Boston official for Immigration and Customs Enforcement—the agency tasked with deporting immigrants living here illegally—you do not.

In an interview with the Boston Herald, the deputy director of ICE’s Boston field office, Todd Lyons, objected to the New York representative’s comments and called them “disheartening.” He tells the paper it was “frustrating” to see immigration enforcement operations “compared to being such horrific acts,” and adding, “To be painted with a broad brush like that, especially with comments that are so inaccurate, is disheartening.”

His statements come amid a controversy that began with comments Ocasio-Cortez shared on social media this week, including a Tuesday tweet that said the Trump administration “has established concentration camps on the southern border of the United States for immigrants, where they are being brutalized with dehumanizing conditions and dying.” The tweet linked to a report in Esquire that compared U.S. detention facilities to historic “concentration camps” found in Nazi Germany, as well as in France, South Africa, the Soviet Union, and other countries, including the internment camps built to detain Japanese immigrants in the U.S. during World War II.

This administration has established concentration camps on the southern border of the United States for immigrants, where they are being brutalized with dehumanizing conditions and dying.

This is not hyperbole. It is the conclusion of expert analysis ⬇️https://t.co/2dWHxb7UuL

Critics, including prominent Republicans, have disputed Ocasio-Cortez’s comments and called on her to apologize. “Please @AOC do us all a favor and spend just a few minutes learning some actual history,” GOP Rep. Liz Cheney tweeted on Tuesday. “6 million Jews were exterminated in the Holocaust. You demean their memory and disgrace yourself with comments like this.”

Please @AOC do us all a favor and spend just a few minutes learning some actual history. 6 million Jews were exterminated in the Holocaust. You demean their memory and disgrace yourself with comments like this. https://t.co/NX5KPPb2Hl

At the end of the day the debate over what to call these places is sort of beside the point, and almost assuredly doesn’t matter at all to the migrants currently being kept there, in conditions that reportedly have included inadequate food and toiletries, ice-cold buildings, exposure to the sun and heat, and cells packed with scores of people. Five children have died in the facilities since December.

As for the controversial phrasing, Ocasio-Cortez has refused to back down. “I will never apologize for calling these camps what they are,” she tweeted Wednesday. “If that makes you uncomfortable, fight the camps—not the nomenclature.”

DHS ripped 1000s of children from their parents & put them in cages w inhumane conditions.

I will never apologize for calling these camps what they are.

If that makes you uncomfortable, fight the camps – not the nomenclature. https://t.co/eJpJWeYiot