The Wayfair Walkout Is On: Employees Plan to Leave Work Wednesday Afternoon

They're calling on the company to cancel a contract with a migrant detention center. 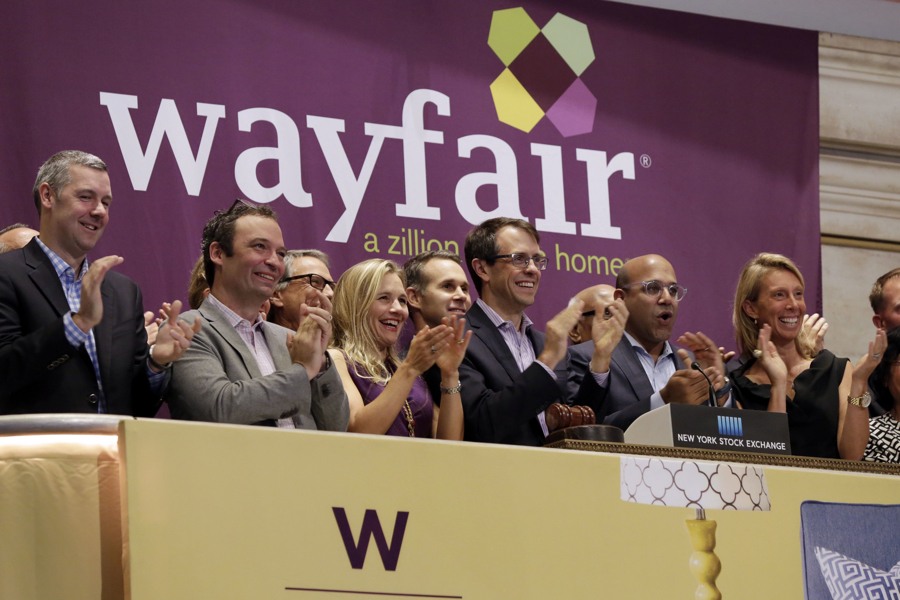 Employees at Boston-based furniture retailer Wayfair plan to walk off the job en masse on Wednesday in protest of their company’s contract selling bedding to an immigrant detention center at the U.S.-Mexico border.

Hundreds of people who work at the company’s Back Bay office in the Prudential Center are expected to stream into Copley Square at around 1:30 p.m. on Wednesday, organizers of the walkout say, and demand that Wayfair end sales of its products to border camps. They have also called on the company to donate the profits it’s made by dealing with border camps to the nonprofit RAICES, and establish a “code of ethics” for Wayfair’s customers.

At 1:30 p.m., tomorrow, we’re asking employees to leave their desks and walk to Copley Square to show our numbers and make this demand. #wayfairwalkout

According to an employee familiar with the deal, Wayfair recently agreed to supply about $200,000 worth of beds and bed frames to the government contractor BCFS to stock a new facility built to detain as many as 3,000 migrant children in Carrizo Springs, Texas. The employee, who asked not to be named, says that Wayfair stands to make about $86,000 in profit from the deal.

Wayfair did not respond to a request for comment Tuesday.

Disturbed by reports of inhumane conditions at the migrant facilities and amid calls to classify the shelters along the border as “concentration camps,” more than 500 Wayfair employees signed a letter opposing the sale, which they sent to company executives Friday.

“The United States government and its contractors are responsible for the detention and mistreatment of hundreds of thousands of migrants seeking asylum in our country — we want that to end,” the letter reads. “We also want to be sure that Wayfair has no part in enabling, supporting, or profiting from this practice.”

In a written response to the employees on Monday, the company’s “leadership team” said it declined. “As a retailer, it is standard practice to fulfill orders for all customers and we believe it is our business to sell to any customer who is acting within the laws of the countries within which we operate,” the response reads. “This does not indicate support for the opinions or actions of the groups or individuals who purchase from us.”

Wayfair did not respond to a request for comment from Boston.

But Wayfair’s rank-and-file say they hope a show of solidarity Wednesday afternoon will force the company to act. The employee who spoke to Boston by phone says they expect to be joined outside by local labor and technology groups.

“We feel really strongly that as members of the team at Wayfair and also as stakeholders that we want to work for a company that we’re proud of, and that holds its customers to the same standards that it holds its employees,” the employee said. “We will continue to work with our leadership team to get to a place where we feel like our actions as a business are in line with those requests.”

The plans, amplified by a new Twitter account run by employees, have caught the attention of politicians, among them Congresswomen Ayanna Pressley and Alexandria Ocasio-Cortez, as well as Massachusetts Senator and candidate for president Elizabeth Warren.

I stand with the hundreds of @Wayfair employees who are planning to stage a walkout at their Boston headquarters tomorrow. The safety and well-being of immigrant children is always worth fighting for. https://t.co/L3hqbazX4l

We must actively #resist any & all efforts by this cruel, incompetent administration to cage children and separate families. I proudly stand in solidarity w/ the hardworking individuals at #Wayfair who are walking out in the name of #justice & humanity. https://t.co/UFvCZNGeTJ

They asked the company to stop. CEO said no.

This is what solidarity looks like – a reminder that everyday people have real power, as long as we’re brave enough to use it. https://t.co/667abeLDTG

We applaud @Wayfair workers who are walking out to protest Wayfair profiting from detention centers.

No one who works for a company profiting from these camps should be standing idly by as children are dying. This takes a village.#WayfairWalkouthttps://t.co/rLElrcUsKi