A local super fan of Boston's most controversial building explains himself. 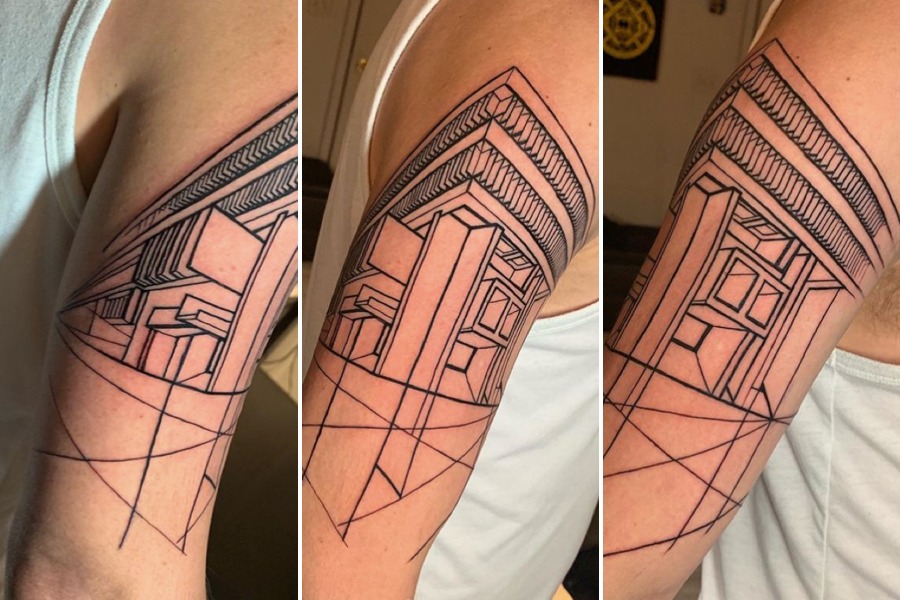 Correct me if I’m wrong (and I’m sure some of you will), but it seems like public opinion on Boston’s City Hall is finally moving in the right direction. It is, let’s not kid ourselves, a wildly odd building—like a giant concrete spaceship built by Russian aliens—and for too long, Boston’s armchair architecture critics seized on its strangeness and dismissed it as an eyesore. Marty Walsh famously batted around the idea of bulldozing it and selling off the land.

But Brutalism is appropriately making its long-overdue comeback, and so is City Hall, one of its most famous and controversial specimens. Just last year in this magazine’s list of Boston’s 100 best buildings, we gave it the number one spot.

One guy who is definitely on team City Hall? Ben Allen, a production editor at Boston publisher Little, Brown, and Company. Allen, who’s 37 and a native of Kentucky, has taken his fandom for the building to new heights, dedicating a giant swath of his right arm to a huge City Hall tattoo. Tattooist Dave Norton, of Pino Bros Ink in Cambridge, posted photos of his handiwork on Instagram last week—an abstract take on the building that’s based on a close study of photos and architectural drawings. And honestly, it might be the strongest vote of confidence in City Hall I’ve ever seen.

So I had to learn more. Here’s my conversation with Ben:

Why did you do this?

I’m from Louisville, but I’ve been here since 2004. It’s a little weird to get something that’s so iconically Boston tattooed on my body, but it’s part of my life. I’ve just loved that building ever since I moved here, and I see it every day when I walk by. I got my marriage license there. I’ve seen experimental music concerts there. It’s just so monolithic and strange, but also blandly bureaucratic. Which I guess is its purpose. I wanted just sort of stark, abstract line work and the more I thought about how much I liked that building, the more I thought it would make a great tattoo.

What have you heard from people?

Why City Hall of all things?

What draws me to it is it’s so controversial, so distinct. I understand people might not like the harshness of the cold concrete and everything. I like that it’s something people feel ambivalence toward.

You see a lot of sort of ’60s and ’70s government administration buildings in this style, but this one is so distinct. In its location, it’s such a focal point. I don’t know if the architectural style is gonna make a comeback, but I do see that more people agree with me that it’s distinctive and weird and cool. People feel that way about a lot of Brutalist architecture.

Are you a City Hall superfan in other ways that don’t have to do with body art?

I have a few books of Brutalist architecture and City Hall is featured in a couple of them. My wife and I use them as coffee table books. It’s a building I’ve always liked and I walk by it every day and I just feel joy when I see it.

Are you a Brutalism defender?

It’s an architectural style I enjoy. I’m not like an expert or anything. I like the permanence of concrete and the hard lines and strong shapes rather than an ornate style. I think that’s a personal preference. They were trying to make something that looks futuristic but in a very utilitarian way. Now we’re 50 years past that period and it’s still standing. I definitely think City Hall looks out of place, but a lot of that has to do with the plaza, which is a big empty space.

It seems like public opinion on City Hall has come a long way. A lot more people agree with you than they used to.

I think one reason why people are sort of coming around, or taking another look, is at least Brutalism was interesting and City Hall is at least an interesting building. Unlike these horrible cookie cutter condos going up, and other boring architecture. If Brutalism isn’t for everybody, it at least has personality.

What do you think about the plans to renovate City Hall Plaza?

I’ve talked about City Hall the entire time I’ve lived here and the thing that’s ugly about it isn’t the building, it’s two things: It’s the plaza around it and the Center Plaza building across the street. I think that building is awful. The drabbest, ugliest office building in the world. I was glad I worked in the ugly building and got to look at City Hall. I always thought the building would look so much cooler with green stuff around it. So it’ll look cool, I hope.