The RMV should have terminated Volodymyr Zhukovskyy's commercial driver's license after he refused to submit to a sobriety test seven weeks ago. 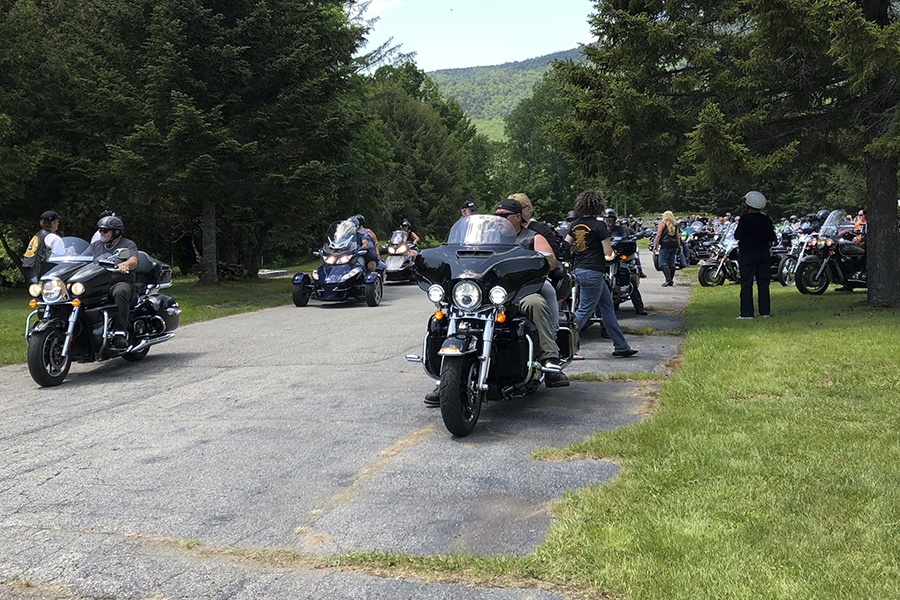 Motorcyclists participate in a “Blessing of the Bikes” ceremony in Columbia, N.H., Sunday, June 23, 2019. / Photo by Lisa Rathke/AP

It turns out Volodymyr Zhukovskyy, the driver of the truck involved in a fatal collision in New Hampshire last Friday, shouldn’t have had a license at the time of the crash at all.

The head of the Massachusetts RMV, Erin Deveney, resigned Tuesday evening following reports that Zhukovskyy, a West Springfield resident, was arrested and charged with drunken driving just seven weeks ago on May 11 in Connecticut. Zhukovskyy should have lost his commercial driver’s license after the incident occurred, but due to a series of missteps was permitted to stay on the road.

The drunken driving arrest took place in a Walmart parking lot in East Windsor. Zhukovskyy was “revving his truck engine and jumping around outside the vehicle,” the Boston Globe reports, and during the arrest, he made “suicidal comments” and displayed “extreme behavior.” When he failed a sobriety test, Zhukovskyy was arrested for allegedly operating a motor vehicle under the influence of drugs or alcohol.

At the time of the incident, Zhukovskyy refused to submit to a chemical test, which should have resulted in the termination of his commercial driver’s license. However, it seems that the inter-state nature of the arrest caused enough confusion that Zhukovskyy slipped through. According to a statement from Stephanie Pollack, Massachusetts transportation secretary, Connecticut “failed to provide sufficient information” about Zhukovskyy’s arrest in the federal system, which prevented Massachusetts from recording the violation.

While Connecticut did make contact with Massachusetts weeks later, on May 29,  the message Connecticut conveyed “did not contain sufficient information to automatically input Zhukovskyy’s OUI into his Massachusetts driving record,” Pollack says.

However, the message did flag Zhukovskyy’s case as one that required a manual review by the RMV—and the RMV failed to conduct one.

Zhukovskyy had a history of dangerous behavior behind the wheel. He denies being intoxicated in the May 11 incident, and his lawyer, John O’Brien, said Zhukovskyy will fight the charge.

The 23-year-old now faces faces seven counts of negligent homicide for last Friday’s crash in Randolph, New Hampshire, in which the pickup truck Zhukovskyy was driving crossed the median of Route 2 and struck a group of motorcyclists head-on. Dartanyan Gasanov, the owner of the company Zhukovskyy was driving for at the time of the crash, told the Globe he was unaware of Zhukovskyy’s checkered driving record. The crash occurred on Zhukovskyy’s third day on the job.

Former MassDOT Chief Operating Officer Jamey Tesler will take over for Deveney as acting registrar. The RMV has not revealed if any other employees will face consequences for the incident.

“The administration will take all necessary steps to ensure the Registry is appropriately handling all data shared between states,” Sarah Finlaw, a spokesperson for Baker, told the Globe.