Somerville is officially the second city in the nation to opt for a total ban. 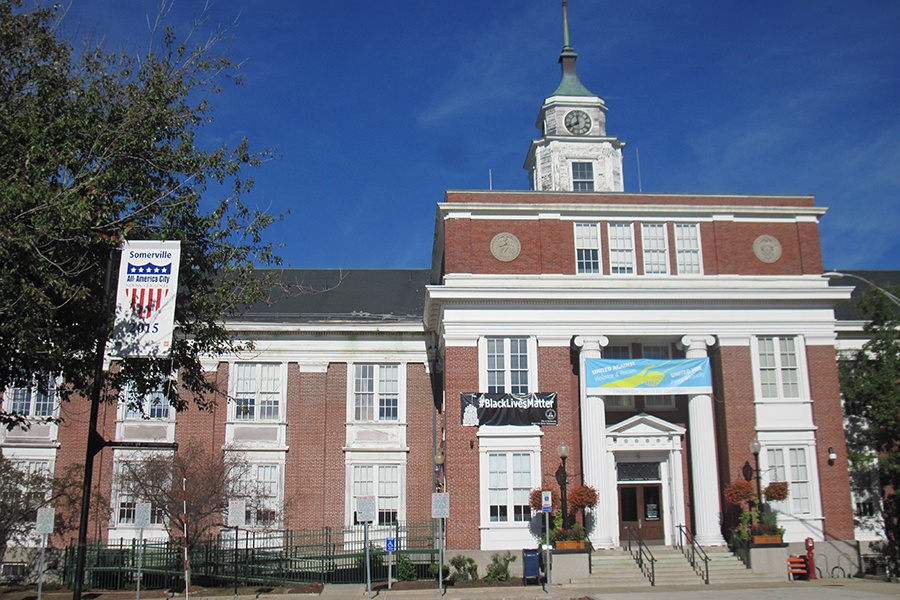 Nowadays, you can do a lot with your face. Facebook recognizes it when you upload photos, Snapchat disguises it with puppy ears, beards, and makeup, and your iPhone unlocks when it sees you (unless you’ve had a really rough night). In China, your face can pay for your cup of coffee; in New York City, your face may soon be able to gain you entry to your apartment. And here in Massachusetts, scans of faces are in use at the RMV, at certain JetBlue boarding gates at Logan Airport, and at the State Police Department.

Condensing your door key, wallet, iPhone passcode, boarding passes, and driver’s license into one convenient location on top of your neck is, admittedly, pretty useful. But the expansion of facial recognition technology has some worried—as our faces become the keys to more and more of our personal data, will privacy protections and regulations be able to keep up?

On this front, Somerville is leading the charge. The City Council unanimously voted Thursday to ban the use of facial recognition technology in police investigations and municipal surveillance programs, sending the bill to Mayor Joseph Curtatone, who signed the order Friday afternoon. Somerville is the second city to opt for a total ban of government use of the technology, following San Francisco.

The bill was sponsored by Somerville City Councilor Ben Ewen-Campen, who has argued that facial recognition is “the functional equivalent of every citizen wearing a barcode on their chest.”

There are currently no federal regulations on commercial or governmental use of facial recognition technology. Critics worry that if the technology continues to go unregulated, it will increase tracking and surveillance, infringing on privacy rights. As the government builds up its cache of personal data, they say, it becomes more difficult to protect it all, bad actors are increasingly interested in acquiring it,  and the fallout from a hack becomes increasingly serious. And this isn’t just speculation: Earlier this month, U.S. Customs and Border Protection—which collects travelers’ facial data—admitted that hackers had stolen an undisclosed number of traveler ID photos and license plate images from a subcontractor.

Critics also point out that in addition to security systems’ inability to protect the troves of data that facial recognition could create, the technology itself is still struggling to identify women and people of color. In an MIT study from last year, facial recognition algorithms correctly identified 99 percent of white men and misidentified one out of every three dark-skinned women. Last summer, the ACLU tested Amazon’s facial recognition technology and found that it incorrectly matched 28 members of Congress (including Mass. Senator Ed Markey) with mugshots of criminals. The mistakes disproportionately involved congresspeople of color.

“An identification—whether accurate or not—could cost people their freedom or even their lives,” the ACLU asserts in the study’s findings.

Will Massachusetts follow Somerville’s lead in regulating facial recognition? It’s unclear. While the state legislature is currently considering bills similar to Somerville’s, there are also voices calling for a less rigid approach to regulation of the technology.  The president of the Massachusetts Coalition of Police, Scott Hovsepian, told the Boston Globe that a ban could get in the way of public safety.

“I just don’t want to see it dismissed it outright, because the potential to be an incredibly useful tool is there,” Hovsepian said to the Globe.

But to the ACLU—who backed the Somerville bill—there’s no time to waste.

“We must ensure face surveillance technology doesn’t get out ahead of our basic rights,” Kade Crockford, director of the Technology for Liberty Program at the ACLU of Massachusetts, said in a statement. “We can’t afford to sit by idly while the technology further outpaces our civil liberties protections and harms privacy, racial and gender justice, and freedom of speech…It’s time to press pause on face surveillance in Massachusetts.”