18 People Were Arrested at a Boston “Jews against ICE” Protest

They stopped traffic and locked arms outside a detention facility in the city. 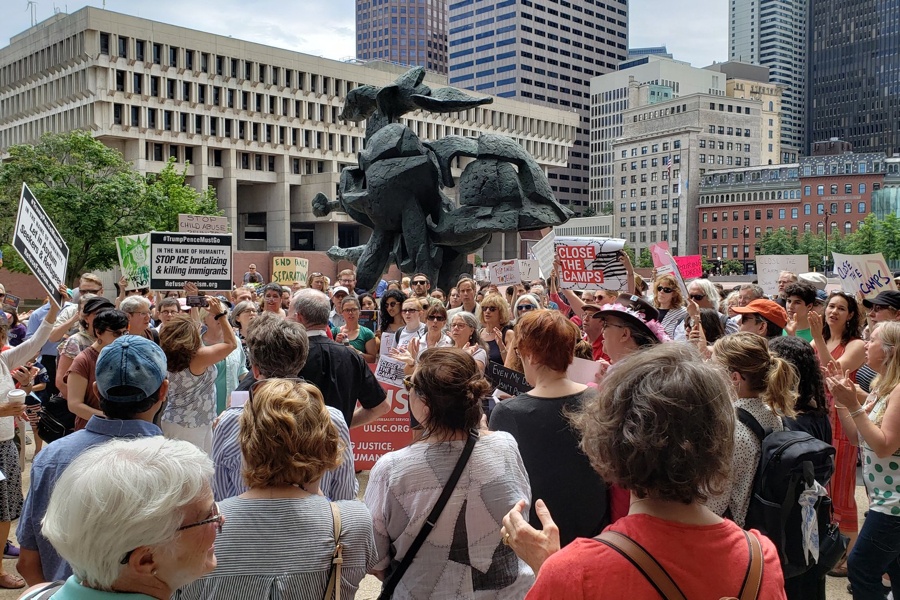 In yet another protest of immigrant detention policy far from the Mexico border, hundreds took to the streets in Boston Tuesday in a “Jews against ICE” demonstration that saw 18 people arrested.

Marchers chanted and waved signs on a route that took them from the city’s Holocaust Memorial to the South Bay ICE detention facility at the Suffolk County House of Correction.

⭕️ HAPPENING NOW: A massive crowd, led by hundreds of #JewsAgainstICE, is marching in Boston from the Holocaust Memorial to shut down the South Bay ICE Detention Center.

We demand dignity and protection for all immigrants and asylum seekers.#NeverAgain is now. pic.twitter.com/TZomiY1KYY

Police blocking highway ramps to prevent ICE protestors from getting onto 93 in Boston #WCVB pic.twitter.com/23Zm2GLy6H

The rush hour protest disrupted busy roadways in downtown Boston, and the Boston Globe reports that police arrested 18 who had linked arms in front of the building’s entrance.

Video shows more than a dozen people dressed in white singing as police from the Suffolk County Sheriff’s Department lead them away from the facility’s front steps.

If you’re reading this, I have just been arrested with 17 other Jews and allies outside of the ICE Detention Facility in Boston, protesting the US government’s detention and dehumanizing abuse of immigrants in concentration camps at the border and around the country. pic.twitter.com/rB6U65yTQ4

The protest came after another held by a group of Jewish activists in New Jersey, 36 of whom were arrested outside an ICE facility on Sunday. In both cities, the protesters rallied behind the slogan “Never Again” and compared the reportedly overcrowded and filthy detention camps at the Mexican border to historical concentration camps.

“As Jews, we’ve been taught to never let anything like the Holocaust happen again,” the Boston group that organized Tuesday’s march wrote on Facebook. “From our many Jewish histories of detention, violence, and migration, both in Europe and all over the world, we know that we’ve seen this before. But the legacies of violence, white supremacy, detention and genocide are alive and well in our communities.”

We are in front of ICE detention center in Boston and some of the detainees holding signs saying “thank you” and “i love you” from inside. This is heartbreaking! #NeverAgain #NeverAgainAction #NeverAgainMeans #CloseTheCamps #mapoli pic.twitter.com/5WihqOO45c

Some of the signs in the march. They’re protesting ICE & the migrant facilities on the southern border. The March is now at BMC on Mass Ave & Albany St. #Boston #7News pic.twitter.com/rQicvKfgQT

It comes just a week after employees at Boston-based furniture retailer Wayfair walked off the job in protest of the company’s contract to sell bedding to a migrant detention camp in Texas.

Congresswoman Ayanna Pressley, who condemned conditions at detention camps after visiting them earlier this week, shared words of support for the marchers on Twitter. In the state’s 7th District, she wrote, “we show up for our immigrant neighbors.”

In the #MA7 we show up for our immigrant neighbors. I’m on a flight back from TX but my #ATeam is there in support & solidarity. Head over and join in. #closethecamps https://t.co/Qs4DF01P71