An eagle-eyed Redditor noticed that one of the new cars has been tagged before it could even enter service. 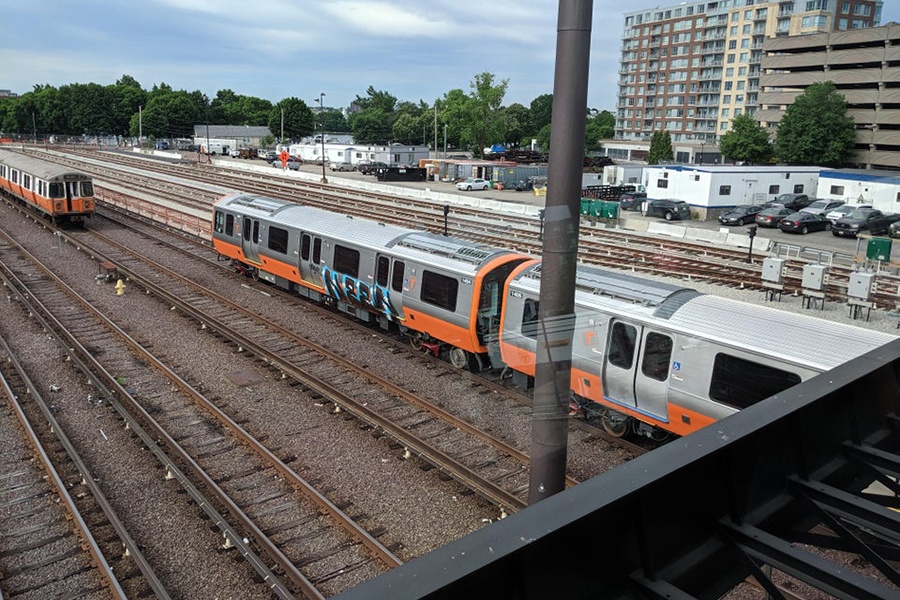 Sightings of those new Orange Line cars are pretty rare. As of now, they primarily exist in promotional materials for the Encore, in the background of Charlie Baker’s press conferences, and—if you work very hard not to scare it away—you may be blessed with a fleeting glance of one blowing past you on the platform in real life.

New Orange Line in the wild at Green Street. Didn’t stop to let anyone on, though 😪 @MBTA @universalhub pic.twitter.com/iKGZ7pEczM

However, it seems that someone got a chance to get up-close-and-personal with one of these specimens, and they want to make sure everyone knows it. An image posted to Reddit’s r/Boston page yesterday shows that one of those elusive, bright-and-shiny Orange Line train cars is now sporting bright blue and black letters across its otherwise sleek surface. Yes, one of the new Orange Line cars got graffitied before it even embarked on its maiden voyage.

Responses on Reddit were mixed, with some users calling for the graffiti to be removed, others suggesting that all the MBTA cars be decorated by spray-painted swirls, and still more descending into a debate over the merits of notorious anonymous street artist Banksy. Banksy, it should be noted, has not yet laid claim to this public art masterpiece.

According to MBTA spokesman Joe Pesaturo, the graffiti appeared Friday night. The tag was spotted Tuesday by Malden resident Jonathan Nguyen, who made the original Reddit post. Nguyen said via a Reddit message that he saw the graffiti while he was walking across the catwalk between Station Landing and Wellington to get to work.

As a daily Orange Line commuter, Nguyen has been eagerly awaiting the debut of the line’s new cars. Their start date was initially set as last winter, but has been pushed back to this month.

“The delays for the new trains kept coming, so I am a bit frustrated with that,” Nguyen said. “It’s also frustrating that they’d just leave their brand new trains out in the open for something like this to happen. It’s like a slap in the face.”

Apparently, though, keeping cars in the open is standard practice for the T. “Like every major transit system, the MBTA keeps subway cars in rail yards because of limited space in subway car houses, where maintenance activities take place,” Pesaturo explained in an email.

Transit police are reportedly investigating the incident, and the graffiti should be removed sometime this week—so if you have a hankering for street art, you should probably skip the Wellington rail yard and head to the I-93 underpass instead.