More than 100 turned out to call for more solid barriers between cyclists and cars. 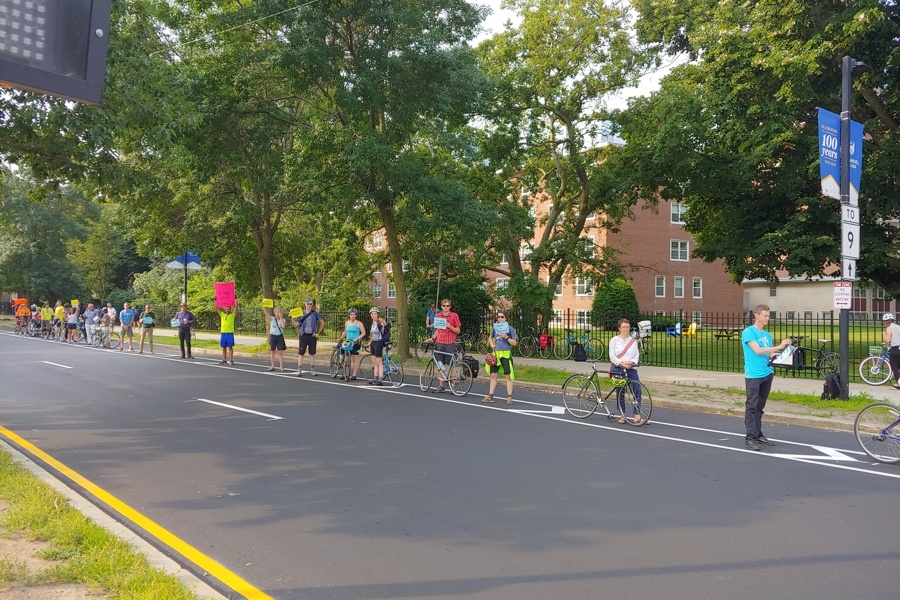 Sometimes pleading (and tweeting and rallying) about protected bike lanes in Boston only gets you so far. Sometimes you’ve got to protect them yourself.

That’s the strategy the city’s bike advocates deployed once again Thursday in a push to get safer cycling infrastructure added to Boston’s busy, and often perilous, streets. More than 100 turned out for the early morning demonstration to stand between the painted barrier between cars and bikes along the intersection of Fenway and Brookline Avenue, forming what protesters called “people-protected bike lanes.”

Photos and videos from the scene show long lines of people in biking gear waving signs and making their presence known to passing cars.

We can do better than just paint. This morning, we are giving commuters what they should have everyday – physical separation from cars. @MassDCR can help us have this all the time. #ProtectedBikeLanesSaveLives#bospoli #mapoli pic.twitter.com/NJNxbviwZr

“People are putting their bodies on the line because our elected leaders and municipalities and the state aren’t listening and are enacting bad policies,” says Becca Wolfson, executive director of the Boston Cyclists Union, which organized the protest. “We don’t know what else we can do.”

The Union is urging the state’s Department of Conservation and Recreation to add a physical barrier to painted bike lanes in the area, where a 69-year-old cyclist named Paula Sharaga was killed in a February crash. Wolfson says the DCR has refused to do so, citing a policy against building the physical barriers on roads under its control.

This is at least the third “people-protected bike lane” protest in the Boston area in recent years. The first came after a rogue cyclist spray painted a bike lane on the Congress Street Bridge over the Fort Point Channel in 2017, which the city promptly scrubbed.

Another was organized in 2018 by a group called Cambridge Bicycle Safety.

Wouldn’t it be great if this bike lane was protected by infrastructure, not humans? We stand with @cambbikesafety and the 100+ activists rallying today for safer streets and better bike lanes throughout Cambridge #DemandMore pic.twitter.com/z8KrCT7H8q

It also comes in the wake of other creative attempts to send a message about cycling infrastructure, including the so-called “Red Cup Project,” which in April saw activists place plastic cups filled with water near bike lanes in Boston, Cambridge, and Newton to demonstrate how bikers are threatened by cars in areas without protected lanes.

Wolfson says to expect more public protests this summer centered on a few other areas identified by biking advocates as problematic, including Memorial Drive and Murray Circle, where Centre Street and Arborway meet near the Arnold Arboretum.