Trump said Pressley, Ocasio-Cortez, Omar, and Tlaib should go back to the "crime infested" places they came from. Pressley says his behavior is "disgusting and unsurprising." 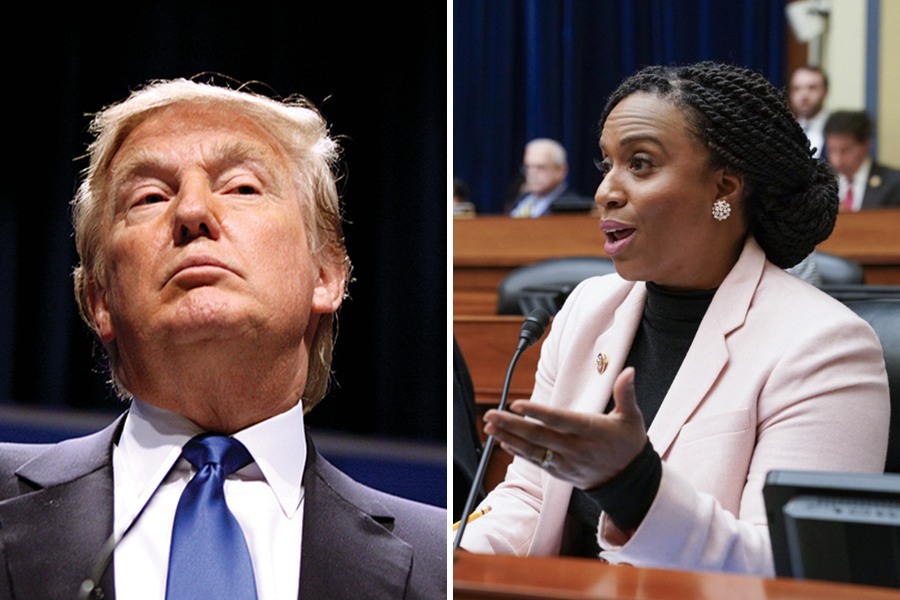 Over the weekend, President Trump added his voice to the chorus criticizing Ayanna Pressley and the Democratic “Squad” by posting a series of flagrantly nativist tweets—and today, Pressley has shared some fighting words of her own.

“Amid this Administration’s ongoing efforts to criminalize, dehumanize, and tear apart immigrant families, Trump’s racist and bigoted lies are disgusting and unsurprising. His cruel efforts to rile up his base have serious consequences on our collective safety and well-being,” Pressley said in a statement Monday morning.

“We will not be dismissed and we will not be bullied by a Twitter thug. I will continue working every day in Congress to stand up to this Administration and make heard the voices of people in the Massachusetts’ 7th.”

The bullying Pressley is referring to comes in the wake of Pressley, Rashida Tlaib, Ilhan Omar, and Alexandria Ocasio-Cortez’s clash with House Speaker Nancy Pelosi over the House’s border aid bill. After the story made national headlines, President Trump jumped at the opportunity to attack the freshmen congresswomen, injecting the conflict with racist rhetoric.

“So interesting to see ‘Progressive’ Democrat Congresswomen, who originally came from countries whose governments are a complete and total catastrophe, the worst, most corrupt and inept anywhere in the world (if they even have a functioning government at all), now loudly and viciously telling the people of the United States, the greatest and most powerful Nation on earth, how our government is to be run,” Trump wrote Sunday morning.

“Why don’t they go back and help fix the totally broken and crime infested places from which they came. Then come back and show us how it is done. These places need your help badly, you can’t leave fast enough. I’m sure that Nancy Pelosi would be very happy to quickly work out free travel arrangements!”

This morning, he showed no remorse, saying that the congresswomen are the ones who need to apologize.

“When will the Radical Left Congresswomen apologize to our Country, the people of Israel and even to the Office of the President, for the foul language they have used, and the terrible things they have said,” he tweeted Monday morning.

“So many people are angry at them & their horrible & disgusting actions! If Democrats want to unite around the foul language & racist hatred spewed from the mouths and actions of these very unpopular & unrepresentative Congresswomen, it will be interesting to see how it plays out. I can tell you that they have made Israel feel abandoned by the U.S,” he continued.

Before releasing her official statement, Pressley—who was born in Cincinnati and raised in Chicago—responded Sunday by tweeting a screenshot of the president’s comments. “THIS is what racism looks like,” she wrote.

THIS is what racism looks like. WE are what democracy looks like. And we’re not going anywhere. Except back to DC to fight for the families you marginalize and vilify everyday. pic.twitter.com/vYzoxCgN0X

After the tweets were posted, Democrats, including Massachusetts’ Elizabeth Warren, Seth Moulton, and Katherine Clark, as well as Pelosi herself, rallied around the freshmen congresswomen.

I reject @realDonaldTrump’s xenophobic comments meant to divide our nation. Rather than attack Members of Congress, he should work with us for humane immigration policy that reflects American values. Stop the raids – #FamiliesBelongTogether!

Let’s be clear about what this vile comment is: A racist and xenophobic attack on Democratic congresswomen. This *is* their country, regardless of whether or not Trump realizes it. They should be treated with respect. As president, I’ll make sure of it. https://t.co/WupieDquLA

I don’t know what else to say but Donald Trump is a racist and a criminal and we have a constitutional duty to impeach him.

This is blatant racism by the POTUS against sitting Members of Congress— women who have displayed more character and loyalty to American values than Trump ever has.

The only person degrading our government is you, Mr. President. https://t.co/ehFqO9E4Ay

Far from decrying the tweets, some conservatives are latching onto the conflict, echoing the president’s xenophobic statements.

“We all know that AOC and this crowd are a bunch of Communists, they hate Israel, they hate our own country, they’re calling the guards along our border (the Border Patrol Agents) concentration camp guards, they accuse people who support Israel as ‘doin’ it for the Benjamins’, they are Anti-Semitic, they are Anti-America,” Senator Lindsey Graham said on Fox & Friends Monday morning, in a rant that President Trump later transcribed verbatim in yet another series of tweets.

In an interview with the Boston Globe Sunday, Pressley pointed out that the president’s racist tweets exemplify the anti-immigrant sentiment currently fueling the border crisis.

“I never use the word you used — president — to describe him,” she said. “I refer to him as ‘the occupant.’ He simply occupies the space. He embodies zero of the qualities and the principles, the responsibility, the grace, the integrity, the compassion, of someone who would truly embody that office. It’s just another day in the world under this administration.”