MBTA Blue Line passengers were forced to crowd into a delayed fleet of shuttle buses during rush hour after a power problem. 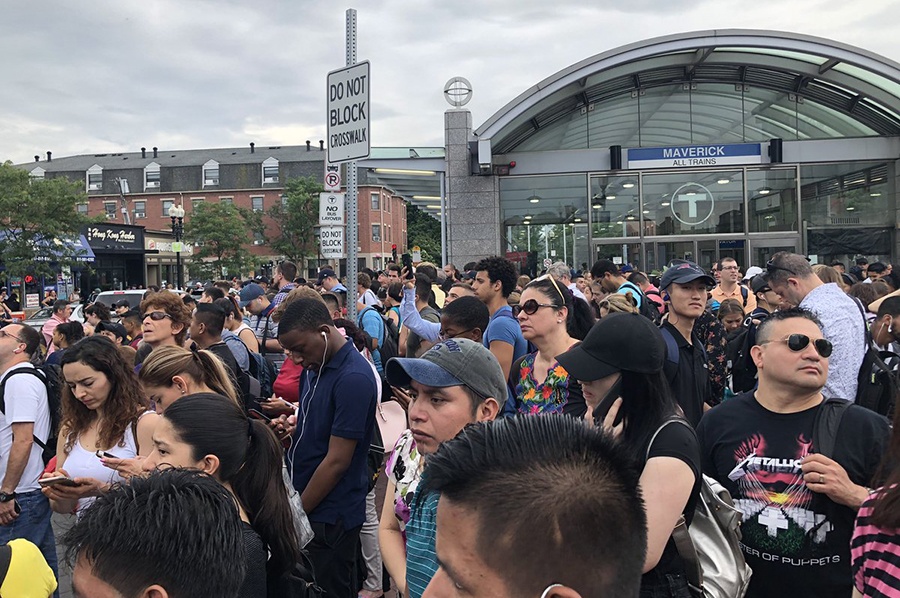 Update, 7/17/19 2 p.m.: The MBTA has tweeted in response to the shutdown, saying “Our initial investigations show that an equipment failure on a train near Gov’t Center caused a power outage affecting nearby trains. That train is undergoing a full inspection and all necessary repairs will be made. Our system works much like a circuit breaker in your home. When there is an issue, our power system turns itself off as a safety precaution. Today, it worked as it should – preventing further damage to trains and other infrastructure.”

After weeks of delays, weekend closures, shuttle bus replacements, uncomfortably hot trains, a fare increase, a derailment, and an emergency $50 million infusion of funds, the summer of T turmoil continues.

This morning, the Blue Line took a turn in the spotlight after a power problem forced the 200-odd passengers of a train just outside of Government Center to evacuate via tunnel just before 8 a.m.

Shuttles replaced service between Maverick and Bowdoin—you know, that stretch of the Blue Line that actually takes you into downtown Boston—and guess what? They were a teeny bit delayed thanks to a phenomenon known as Boston’s daily rush hour gridlock. Train service resumed around 9:30 a.m., but the damage was done. As we learned from the Red Line breakdown, and re-learned during the Green Line breakdown: rush hour + no trains + delayed shuttle buses = crowds of not so happy commuters.

Live look at MBTA Maverick Station – all Blue line trains are replaced by buses because of a power problem near Government Center. Join us on @NECN @NBC10Boston for updates pic.twitter.com/Z3dMiTaPfJ

Trapped on an island with thousands of my neighbors, but there’s no problem with the #mbta. #eastboston #BlueLine pic.twitter.com/0ML60ghTtO

A breakdown on the Blue Line is particularly troublesome. As Adam Vaccaro of the Boston Globe points out, East Boston residents can’t walk or bike to downtown thanks to the good old Boston Harbor.

Wait, you think. Couldn’t they take a boat?

No joke: They’re now getting people out 8 at a time via dingy pic.twitter.com/f2LfUAINFv

Haha, nope. What about Uber and Lyft, you might ask?

The @MBTA blue line is shut down, so I’m stuck at home in Revere. Meanwhile, Uber and Lyft rates from my apartment to the Globe office are in the triple digits pic.twitter.com/LjAlrBYW4A

…But don’t they have the Silver Line out there?

MBTA told Blue Line refugees they could take the SL3 from Airport to downtown, but the SL3 was delayed because the Chelsea Creek drawbridge went up

Yes, for most East Boston residents, it’s nearly impossible to get to work without the T. Thus, they were left crowding the sidewalks this morning, so desperate for any sliver of joy that they had to turn to mildly-entertaining-but-also-kind-of-sketchy apps for entertainment.

Me by the time I get to work today. #MBTA pic.twitter.com/hPIPTIyciK