Beware: A Public Health Advisory Has Been Issued for the Charles River

A giant algae bloom is underway and you should not touch the water. 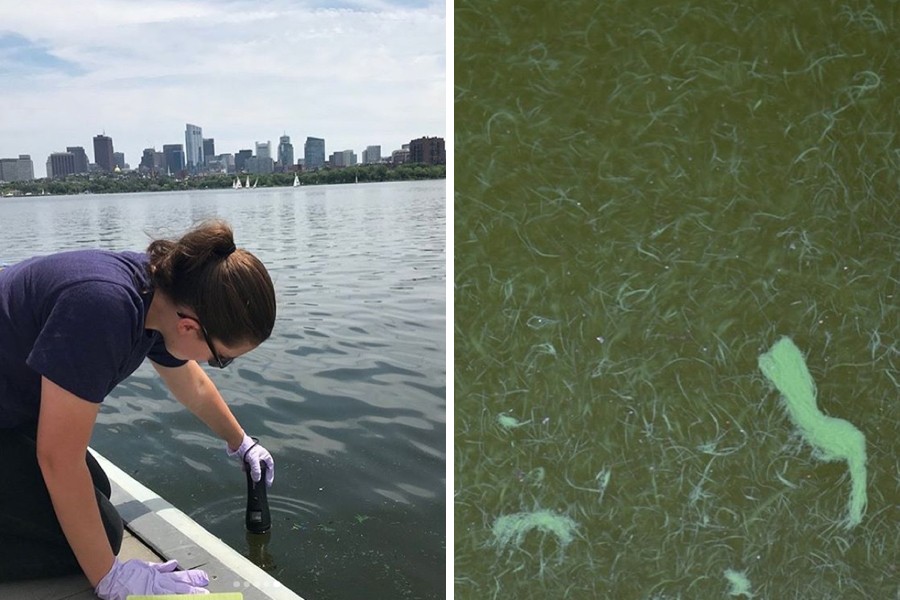 If the Charles River is looking especially green and weird this week, that’s because it’s chock full of toxic algae.

A public health advisory has been issued for the Charles River Basin, stretching all the way from the BU Bridge to the Museum of Science, after the return of the dreaded cyanobacteria. New signage awaits boaters and other visitors that the water has temporarily become a hazard.

The affected area is “pretty large,” says Lisa Kumpf, aquatic scientist at the Charles River Watershed Association, which tests the river regularly. Blooms like this last about a week or two, she says, and typically happen about once a year. (Thankfully it came after this year’s Charles River Swim Day).

Health officials recommend that if you come in contact with the water during an algae bloom, you should rinse off immediately and avoid touching your face, as the substance can cause rashes and other maladies, and has even been linked to neurological conditions after heavy exposure.

During the bloom, the river has a pretty distinctive (and, frankly, pretty gross) look to it. “It’s green-tinted water, and depending on where you are it looks a little different,” Kumpf says. “You can see little lines of algae floating in the water, and sometimes clumping up on the surface.”

We are officially issuing a public health advisory for toxic algae found at sites from the BU Bridge to the Museum of Science. Boaters should avoid contact with water. pic.twitter.com/ugbqmc9QTj

And in case you were wondering, it is in fact our fault, although the recent warm weather also had a role to play. The algae feeds on excess nutrients in the water, which comes from pollution flowing from our streets and into storm drains. “Reducing the amount of nutrient pollution we have in the river is a big goal of ours,” Kumpf says. “That can be done through implementing things like green infrastructure into our city streets and parks, so we can get more of that natural filtering of the pollution before the water goes directly into the Charles River.”

For now, you can keep track of how the water is doing by monitoring the CRWA’s online Water Quality Notification System.