A warning from the state is in effect for the day. 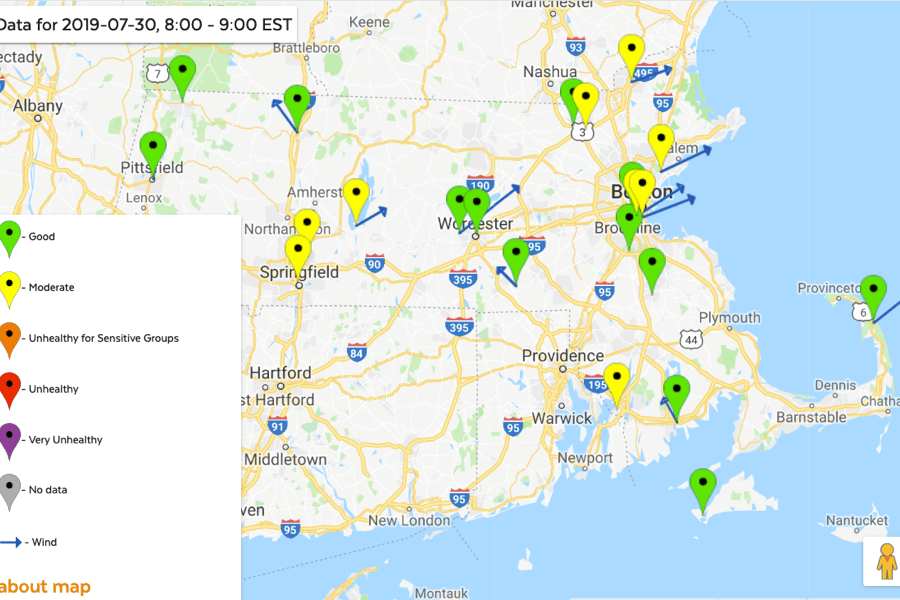 Looks like it’s not just an extremely sweaty subway ride you’ve got to worry about right now in Boston. According to a warning from the state, the air quality for much of the city has been found to be temporarily “unhealthy.”

A large swath of air in Boston has been deemed “moderate” by the state Department of Environmental Protection’s standards. “Air quality is acceptable; however, for some pollutants there may be a moderate health concern for a very small number of people,” the agency says in a description of that designation on its website. “Unusually sensitive people,” it adds, which can include those with severe asthma or lung or heart disease, “should consider reducing prolonged or heavy exertion outdoors.”

An alert about diminished air quality is expected to remain in effect between 11 a.m. and 11 p.m. Tuesday, according to an official DEP tweet.

It varies, though. In Kenmore Square, the air quality is still deemed “good.” Other areas nearby where the department found “moderate” air quality can be found in Lynn, Chelmsford, Haverhill, and Fall River.

The DEP identifies a handful of causes for unusual levels of pollutants in the air, among them the direction of the wind and certain weather conditions. Warm weather and increases in direct sunlight can drive up the production of ozone, the DEP says.

To call this weather warm is, clearly, an understatement. With possible heat indices reaching near 100 degrees today, the National Weather Service in Boston has issued a heat advisory for eastern Massachusetts, as well as Rhode Island and the Connecticut River Valley, and is urging all of us to take precautions, including avoiding direct sunlight or strenuous activities outdoors.

[Heat Advisory Today] Hot and humid again this afternoon with high in the lower to middle 90s in most locales away from the immediate south coast. This will result in heat indices between 95 and 100. Heat Advisories are posted. A few afternoon showers/t-storms are also possible. pic.twitter.com/VSq5owydSO

How to stay cool during #extremeheat: if you’re outside- find shade, wear a hat, avoid high-energy activities. Move outdoor exercise to when it is cooler. Wear loose, lightweight, light-colored clothing. #stayinformed of outside temps. More #safetytips: https://t.co/RtE6j61em5 pic.twitter.com/qboYrolT1t