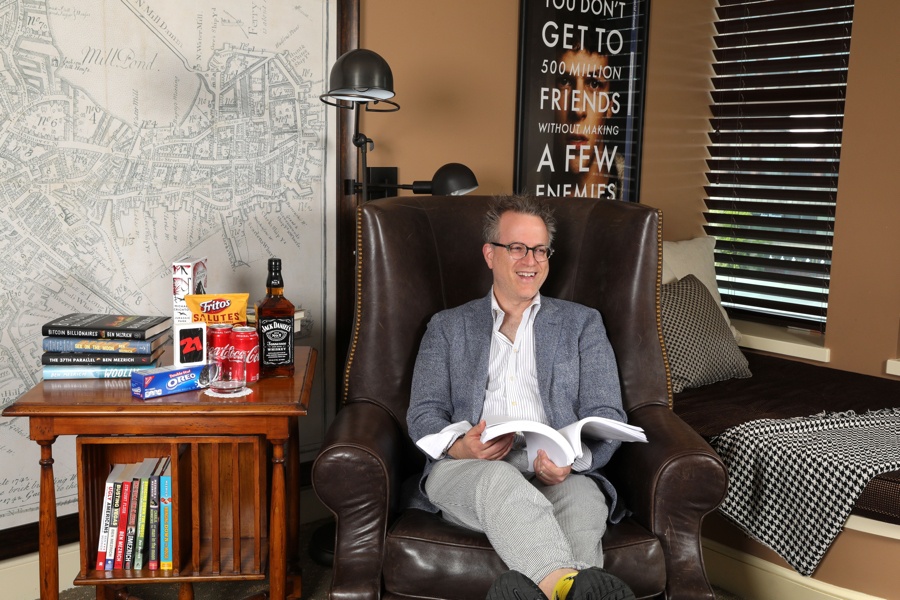 Ben Mezrich in the Ben Mezrich-themed suite at the Hotel Commonwealth. Courtesy photo

Got a killer book idea, but need a little extra push to get things going? Consider this your motivation: Boston’s Hotel Commonwealth is giving away a free two week stay to one lucky aspiring novelist, to be selected via writing contest.

The luxury hotel in Kenmore Square says it will soon accept manuscripts from would-be authors, one of whom will win a complimentary 14-day writers’ escape in a suite inspired by the Boston author Ben Mezrich.

Mezrich—whose past bestsellers include Bringing Down the House and Accidental Billionaires—will be one of several judges that will pick the winner, along with some representatives from the hotel and the Boston Book Festival. Mezrich’s latest book, Bitcoin Billionaires, came out in May. He wrote about it in Boston earlier this year.

Applicants to the Commonwealth’s Writer in Residence Contest are asked to send in the first 500 words of a book, along with a 100 word synopsis. According to the contest’s rules, only authors over age 21 who haven’t had a book published will be considered. After the two weeks of writing, the author will also get the chance to have their manuscript read by some hand-selected local authors.

Submissions will be accepted between now and October 1, with the winner getting notified by the end of November.

You can also book a night in the Mezrich-themed suite itself without entering the contest, if you want. It comes stocked with a typewriter, a record player, and reams of paper, along with some merch from his blockbusters, and some of his favorite movies, books, and nourishment, including Jack Daniels and Oreos. It starts at $699 a night.