How Hot Is It in Boston? The Hottest July Ever Recorded

This swampy, warm, cursed month is about to break a record. 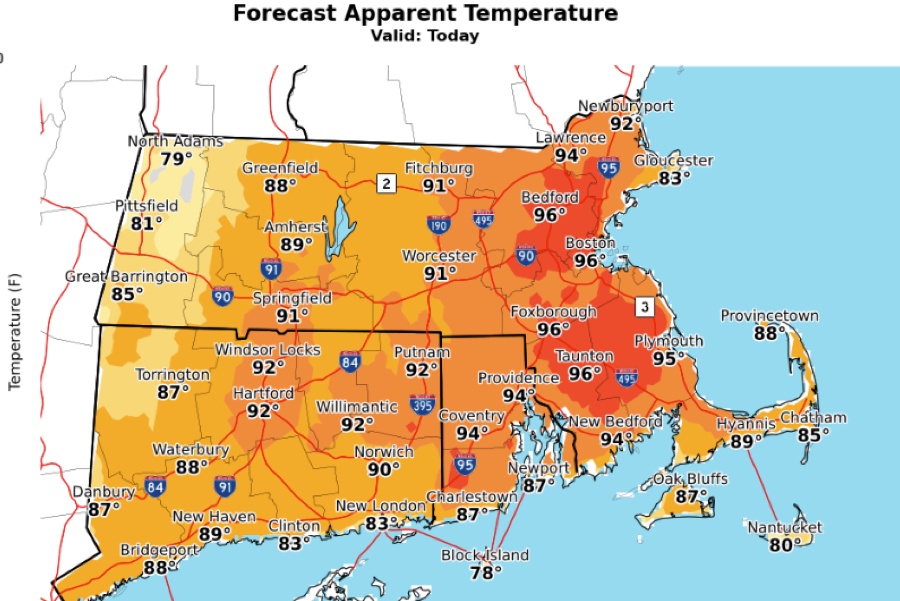 If you feel like it’s an especially hot as hell July in Boston this year, you’re right.

As the temperature in the city on this last day of the month climbs once again into the 90s and has prompted yet another heat advisory, meteorologists are predicting this will be Boston’s hottest July on record.

The National Weather Service won’t make the final call until after midnight, but as of this morning the average temperature for the month in Boston has been 78.5 degrees, besting the previous record of 78 degrees set back in 1983. That’s the hottest in nearly 150 years, as records date back to 1872.

“We are on tap for the warmest July,” says Alan Dunham, meteorologist for the NWS in Norton, adding, “It confirms what everybody thinks: ‘God it’s hot out there.’ Yeah, it is.”

Including Wednesday, if temps get that high, we will have had 12 90-degree days in Boston this month. Dunham points out that the city did not see any 90-degree days in May or June, while we typically see one or two during those months.

If you’ve been unusually hot at night these past few weeks, Dunham says, you’re not alone. And that’s got a lot to do with the record-setting month. “What’s really driven up the average temperature is our overnight lows have been fairly warm,” he says. “We’ve had nice hot days, and then some warmer nights.”

We won’t be the only city to break records. Hartford, which so far has had an average temperature of 78.2 degrees, will likely surpass the previous high of 77.9. But while it’s also been hot in Providence, Dunham says that city’s record will probably not be broken, as it’s currently only the fifth hottest July on record.

The MBTA has felt the effects of this atypical heat, and has warned commuters that it “may be operating trains at reduced speeds in some areas to compensate for heat-related stress on the tracks, which could result in slightly longer travel times.”

Wake me up in the fall.

Due to extreme temperatures forecast for today & tomorrow, trains may travel slowly in some areas to reduce heat-related stress on the tracks. We have crews stationed around the system to perform inspections and provide additional assistance. Learn more: https://t.co/dBUIQQ24tm pic.twitter.com/aMV985FcV7