Boston is under a severe thunderstorm watch until 9 p.m. 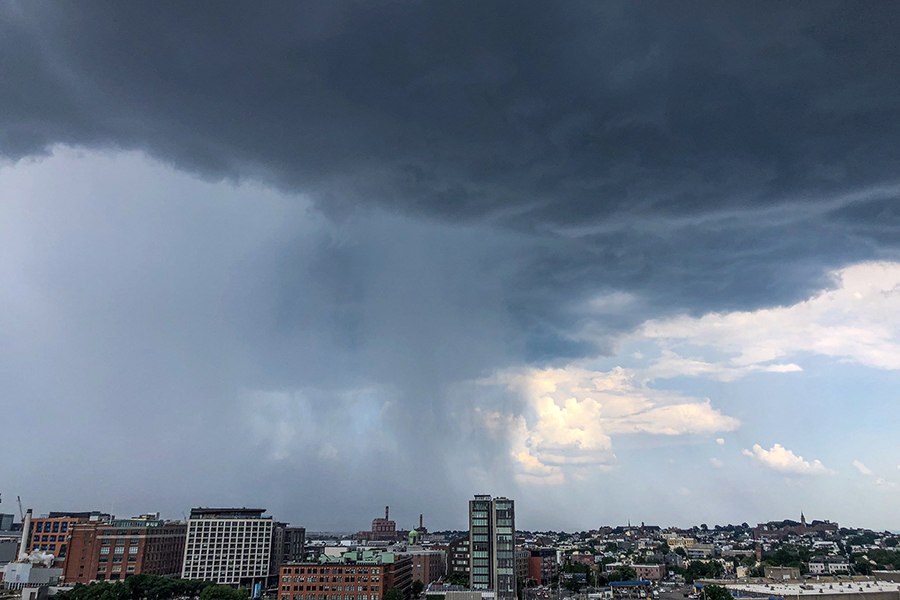 Wild weather we’re having, huh? In addition to facing record-breaking heat, Boston, along with several counties across the state, is now under a severe thunderstorm watch until 9 p.m.

Earlier this afternoon, people across Eastern Massachusetts saw a brief but powerful squall blow through the area. Around 4 p.m., Logan Airport enforced total ground stoppage due to the weather, delaying over 350 flights and cancelling over 60. Wind gusts of 74 miles per hour were measured at the airport, officially classifying the storms as severe.

That powerful wind resulted in some pretty intense damage to power lines and trees. Over 12,000 power outages were reported across the state this afternoon, with Gloucester, Somerville, Beverly, and Newton hit the hardest.

According to the Doppler, it looks like we’re not out of the woods yet, with the potential for more storms making their way toward the area throughout the evening. So, go hunker down at home, get cozy, and—maybe instead of going outside—check out these impressive photos and videos from this afternoon’s storm from the safety of your couch.

The severe storm kicked off with some very ominous skies.

Then came the wind, hail, and lightning.

Incredible photo from @pictureboston of lightning striking the Logan runway a short time ago. pic.twitter.com/85X6G4SSYg

And then: the aftermath. Flooding, downed trees, and plenty of power outages.

Trees down on broadway in Somerville from storm #7news pic.twitter.com/h0yeTQAWL2

The silver lining in this rain cloud? Baseball fans, rejoice: the game is still on for tonight! But you might want to consider bringing a change of socks.