It was created by activists from Deeper Than Water and the Boston chapter of Black and Pink, two local organizations that work against incarceration. 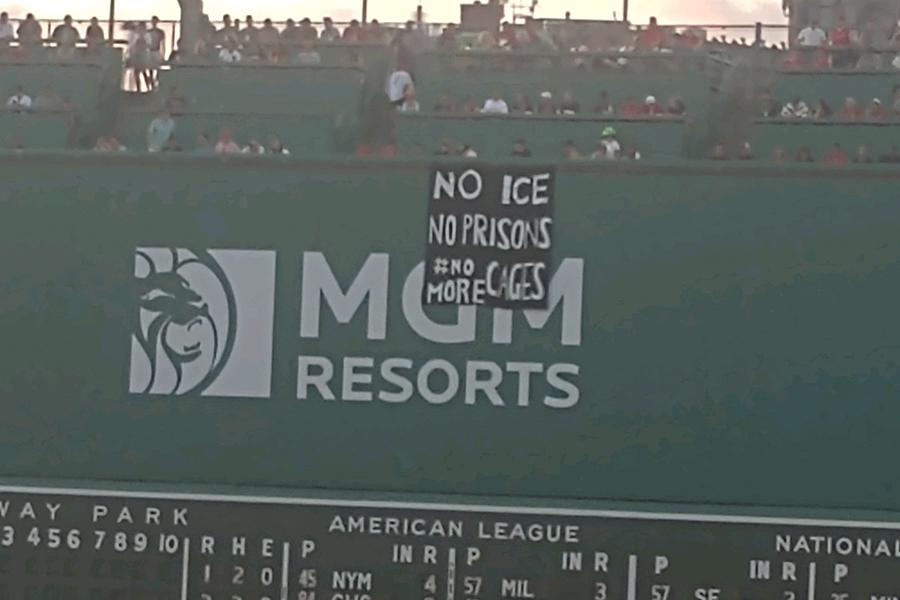 During last night’s game against the Tampa Bay Rays at Fenway, activists protesting Immigrations and Customs Enforcement and the prison industry unfurled a banner over the Green Monster.

The banner, which reads “No ICE, no prisons, no more cages,” was created by activists from Deeper Than Water and the Boston chapter of Black and Pink, which are both groups that work against incarceration. Four members of the organizations unfurled the banner at the top of the second inning of the game. They were quickly apprehended by security and escorted out of the park.

Fenway has a policy that bans signage hung over the Green Monster. “The fans involved were in violation of the club’s signage policy and escorted out of the ballpark,” a spokesperson for the Red Sox tells WCVB.

The protest was staged specifically because the American Correctional Association’s annual Congress of Correction, a conference for professionals in the prison industry, is taking place in Boston from August 1-6. The Association planned a “Night Out at Fenway Park” for the Thursday night game.

“We wanted them to see who they were sharing the park with,” says Katie Omberg, Black and Pink’s Boston chapter coordinator.

A post on the Deeper Than Water Facebook page, in which the organization takes credit for the banner drop, lays out the statement the organizations hoped to make to the ACA.

“We are demanding: 1. Shut down the cages and the camps 2. Stop accrediting facilities that abuse people and violate human rights 3. Make the credentialing process public,” the post reads.

As people have begun to respond to the protest, many have assumed that the organizations are protesting the Trump administration specifically, Omberg says. However, the groups have been protesting the incarceration system since before Trump took office, and they see their mission as much larger than simply ending the president’s policies.

“This isn’t as much about who’s in charge,” Omberg says. “This is about America, larger. This is a bigger movement to abolish prisons.”