An Artist Put the Boston Common Ducklings in Cages

Karyn Alzayer says it's a protest of conditions at migrant detention centers. 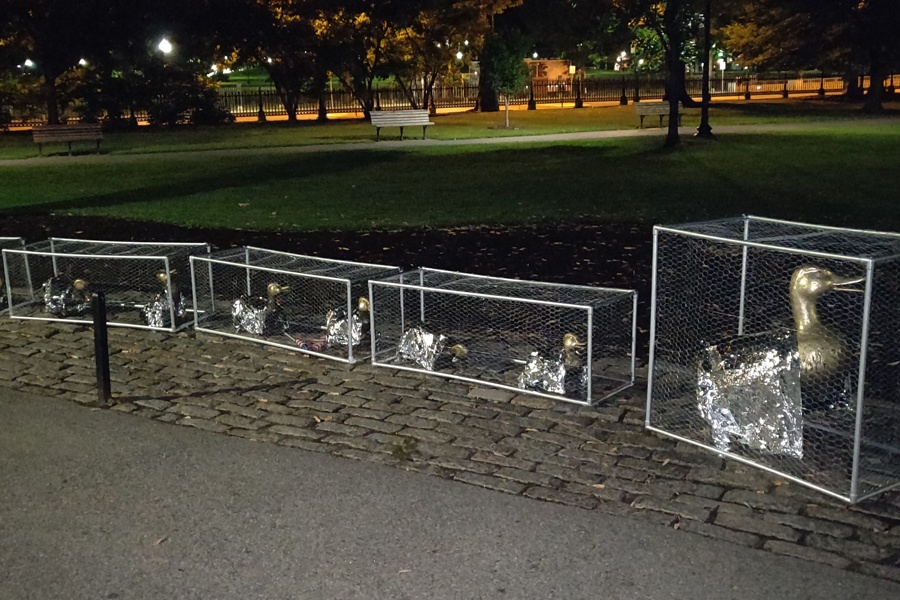 Visitors to Boston Common were greeted with a disturbing sight Friday morning, one a local artist says is meant to raise awareness of the conditions at the U.S./Mexico border: The park’s iconic duckling statues, beloved by children, were trapped in cages.

In an interview with WGBH, artist Karyn Alzayer says she headed to the park before dawn and placed a series of chicken-wire cages over the bronze figures, which are inspired by the beloved children’s book Make Way for Ducklings and depict a mother mallard and her eight babies walking along a brick pathway. She also draped silver space blankets over each of them.

If the scene reminds you of images from detention camps near the border, where immigrant children are held after crossing into the U.S. and are often given only the metallic blankets to keep warm, that’s the point. “In the book, the ducklings were looking for a place to stay. If that were to happen during today’s climate this would be their fate,” she tells WGBH, adding that the ducks “are Boston’s quintessential immigrant family.”

The piece of guerrilla artwork, which has since been removed, showed up two days after the ACLU reported that nearly 1,000 children had been separated from their parents at the border even in the year since a judge ordered the Trump administration to end the practice. About 40 percent of those children were younger than 6 years old. It also comes amid an ongoing debate over whether it’s appropriate to describe the overcrowded and unsanitary facilities as “concentration camps,” and protests that included a walkout involving hundreds of Boston Wayfair employees who opposed the company’s contract with a detention facility.

This isn’t the first time the ducklings have been used to make a statement, political or otherwise. They’ve been known to end up wearing sports gear ahead of championships, and were once topped with pink “pussy hats” ahead of the Women’s March in 2017.