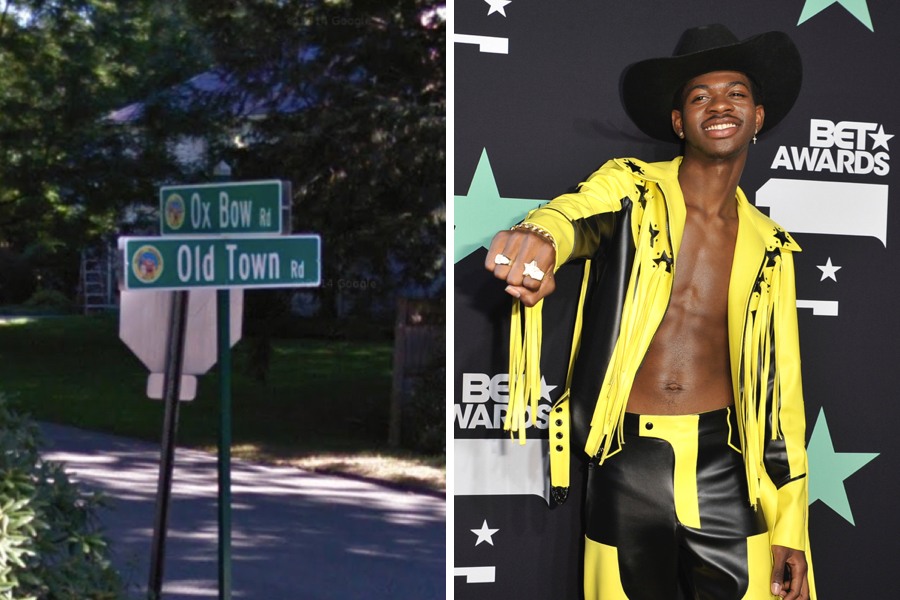 Everybody knows the lyrics: In his wildly popular single, Lil’ Nas X sings all about taking his horse to the Old Town Road. But in Wellesley, Massachusetts, it’s the “Old Town Road” itself that’s being taken. The town’s “Old Town Road” traffic signs, that is.

According to the local news website the Swellesley Report, the roadside signage for a tiny side street in the town’s leafy Wellesley Farms neighborhood, which happens to share its name with the most popular song in the world, has become a target for thieves.

A town spokeswoman confirms that its public works crews have, in fact, had to keep up with the missing signage ever since the rap-country crossover tune became a smash hit. “In the spring, probably late spring, about the same time as the song came out, they started noticing the signs had been taken,” Stephanie Hawkinson, the town’s communications project manager, tells me. “It’s been taken three times, if not more.”

The sign as of Thursday remained a sawed-off stump, per Swellesley, as the thief or thieves appear to have made off with the pole while collecting their prize. It’s not a cheap or easy problem to fix. Replacement signs cost about $50 a pop, plus labor, and the parts required to set up and anchor a new pole can be more than $70. The missing sign could also make it more difficult for first-responders to navigate the real-life Old Town Road in the event of an emergency, Hawkinson says.

So she hopes other would-be thieves will leave this latest edition of Wellesley’s Old Town Road sign alone. “People doing this don’t think it through. They think, ‘I want that sign and it’d look great in my dorm room,’” she says, adding, “Enjoy the song and leave the sign on the post.”

This isn’t the first time that signs for actual Old Town Roads have been targeted by fans. In British Columbia, Canada, the district municipality of Sicamous had its Old Town Road marker stolen so many times, the local chamber of commerce started making and selling replicas as a way to deter thieves.

While there are a handful of other communities in Massachusetts that boast Old Town Roads, officials in Boston will not have to deal with this particular problem, as we do not. A quick scan of city records does not reveal anything obviously funny or topical about the signs reported stolen recently via Boston’s 311 app. The city does, however, have scores of other curiously named roadways, including a Goodenough Street, a Narragansett Street, and an Electric Avenue.

If you’re really in the mood for an “Old Town Road” sign, or any other road sign you might have your eye on, but want to stay on the right side of the law, the local company Atlantic Highway Sign is apparently here to help. The Brockton-based shop, which supplies signage for Wellesley and many other communities in the state, tells me it will happily take sign orders from the public for about $75 apiece. Its manager, Dalia Whelton, says she spends a lot of time re-making signs for roadways with funny names—”Ice Cream Road” and “Lovers Lane” are among the most popular for thieves—but has yet to get any Lil Nas X-themed requests yet. You could be the first.