Captain Thomas Woodworth at the Wyatt Detention Facility has been placed on leave after a truck was seen plowing into a crowd of peaceful demonstrators, injuring two. 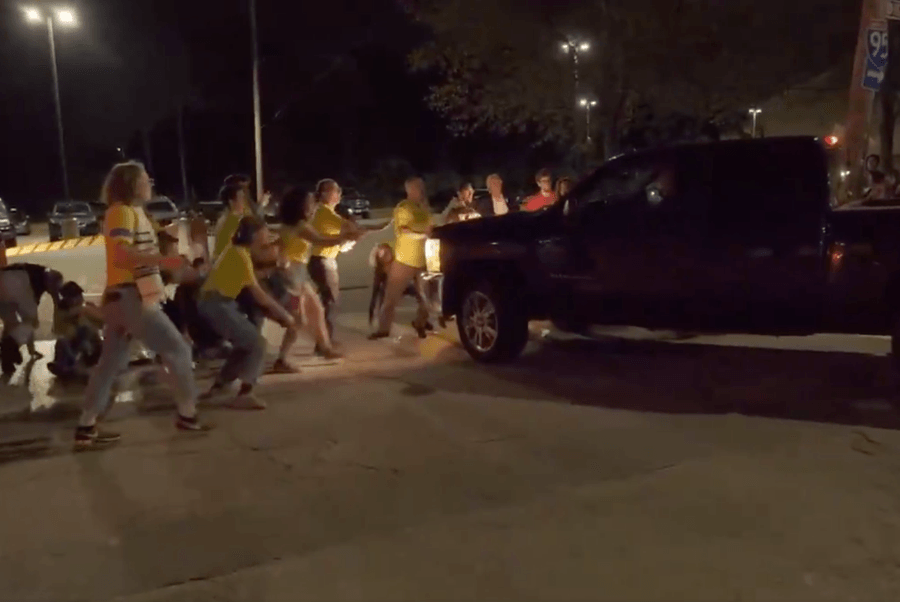 A peaceful anti-ICE protest in Rhode Island took a frightening turn on Wednesday night, as a man in a large pickup truck drove into a crowd of protesters, injuring two. According to the Jewish activist group Never Again Action, five people were taken to the hospital, including two who were struck by the vehicle, and three who were injured by exposure to pepper spray.

Video filmed at the scene as the chaos unfolded showed a line of several dozen demonstrators in yellow shirts blocking the entrance to the privately-operated Wyatt Detention Facility in Central Falls, where activists say Immigration and Customs Enforcement is detaining immigrants.

The video shows the demonstrators chanting slogans, waving a sign reading “NEVER AGAIN IS NOW,” and standing or sitting at an entrance to the facility’s parking lot. Then, a man can be seen steering a large, dark-colored pickup truck toward the crowd, blaring its horn, and driving headlong into the line of protesters, who scream and leap to their feet or out of the way, but collectively continue to block the truck’s path. When several people remain directly in front of the truck’s grill, chanting “Shame! Shame!” and confronting the man, he once again drives the vehicle forward, and it can be seen rolling quickly at least a full truck length forward into the mass of demonstrators.

Another video of the incident shot by reporter Steve Ahlquist shows that the man behind the wheel appears to be wearing a uniform with a badge. It also shows the crowd swarming the car and again blocking its path by standing in a line and locking arms. Moments later, several authorities wearing uniforms reading “corrections” can be seen marching into the crowd, yelling, “Back up!”  Then, the video shows, an entrance gate to the parking lot is raised, and at least two of the men spray a substance into the crowd, which flees.

“I got pepper sprayed,” one woman can be heard telling a man who carries her away from the scene, in another video shared on Twitter. “Please help me.”

After the first ICE guard ran us over with his truck, the rest of them ran over & pepper-sprayed us. The police present just stood by and watched, doing nothing.

Central Falls police were seen arriving at the scene shortly thereafter, but there do not appear to have been any arrests reported.

The Providence Journal reports that the incident is now being investigated by state police and the Attorney General’s office.

“Once we have a full understanding of the relevant facts, we will determine how to proceed,” Rhode Island Attorney General Peter Neronha tells the paper in a statement. “Peaceful protest is a fundamental right of all Americans; it is unfortunate last night’s situation unfolded as it did. We urge all to exercise restraint as our investigation proceeds.”

In tweets, Rhode Island Governor Gina Raimondo said she is outraged by the scene, adding, “Our state and our nation were built on the idea that everyone has a right to express their opinion publicly and peacefully,”

President Trump’s immigration policies are immoral, and these Rhode Islanders were exercising their constitutional right to protest. I am in communication with RI State Police Colonel Jim Manni regarding the events of last night, and we are committed to a full investigation.

The Wyatt Detention Facility on Thursday afternoon announced that Captain Thomas Woodworth, who the activists identified as the man driving the truck, “has been placed on administrative leave” while the probe into the events of Wednesday night continues. In a statement, the facility says it “is also conducting a top to bottom review of the incident” internally.

BREAKING: Statement from the #Wyatt Detention Facility about what happens during last night’s @NeverAgainActn protest: pic.twitter.com/sfToyl0TS8

The activists who blocked the truck’s path oppose the Trump administration’s immigration policy, comparing its treatment of migrants to the treatment of Jews in concentration camps, and have staged efforts around the country to block access to sites where ICE operates. Last month 18 Jewish demonstrators were arrested in Boston after staging a protest outside the South Bay ICE detention facility at the Suffolk County House of Correction.

“The United States government is targeting immigrants in our community like the Nazis targeted the Jews. We were taught to never let anything like the Holocaust happen again, so we are sounding the alarm now,” the group says in a description of its mission posted to its Facebook page. “Many of our ancestors narrowly escaped from conditions like what we are seeing today in concentration camps at the border and detention centers around the country. We are putting our bodies on the line because when we say never again, we mean never again for anyone.”