Dozens of workers at the Battery Wharf Hotel just walked off the job. 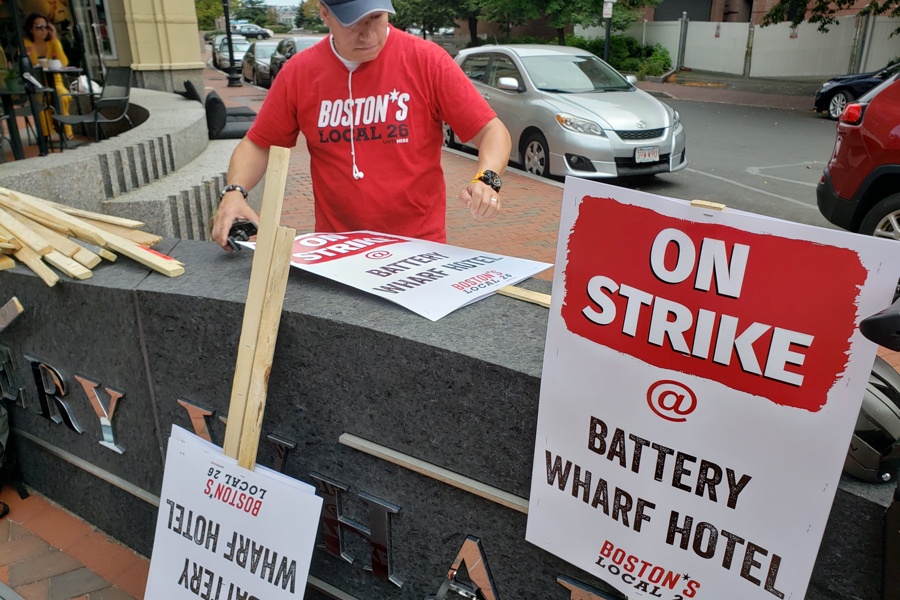 Nearly a year after hundreds of workers walked off the job at Marriott properties in the city, a contract fight at another Boston hotel appears to have reached a breaking point, as food service and hospitality staff at the North End’s Battery Wharf Hotel have officially gone on strike.

About 75 employees at the 150-room luxury hotel said they planned to leave their posts before noon on Thursday, calling for demands to be met after more than a year of stalled negotiations with Ontario-based Westmont Hospitality Group, which operates the hotel. Unite Here Local 26, which represents the workers, says it is seeking better pay and pensions, as well as a contract that preserves a union-provided health care plan and includes safeguards for immigrants and policies for sexual assault prevention.

“The Battery Wharf Hotel thinks it doesn’t need to give protections to women, immigrants and African-Americans. The hotel thinks it can get around providing good jobs in Boston. When we said one job should be enough for every hotel worker in Boston, we meant it,” Brian Lang, the union’s president, says in a statement.

The union it opposes the hotel’s moves to rewrite an agreement that the hotel help employees resolve immigration issues and guarantees that if a worker’s immigration status lapses, he or she can return to the job once authorized to work again. It also opposes the hotel’s efforts to move employees to an employer-sponsored health plan that the union says is more expensive than the one it provides, and has also called on the hotel to sign a 2006 agreement that would commit the hotel to taking proactive steps to make its staff more diverse.

Last year, workers at seven Marriott-run hotels in Boston remained on strike for 46 days before coming to a contract agreement with the company. Carlos Aramayo, Unite Here Local 26’s secretary-treasurer, says its members are once again prepared to wait for the contract they want. “This is obviously the most serious action a worker can take, and it’s our hope and expectation that the company will come to its senses and begin to negotiate in good faith so we can get this resolved quickly,” he says.

The hotel’s general manager Nick Teeson said in a statement to the Boston Globe in July that negotiators “are striving to reach a fair agreement for all involved.”

In the weeks leading up to the strike, the staff have heard support from some prominent voices, including Senator Elizabeth Warren, who tweeted last week that she was “standing in solidarity” with the workers.

Thank you to @wutrain for joining us at the Battery Wharf Hotel. So proud to know that Boston is a union town! #BatteryWharfStrikeAlert #1u pic.twitter.com/xDVnEtfjDO

Ahead of the vote, the Teamsters vowed not to cross the Battery Wharf picket line.