The City Council will hold a hearing on the idea after last month's "straight pride" rally. 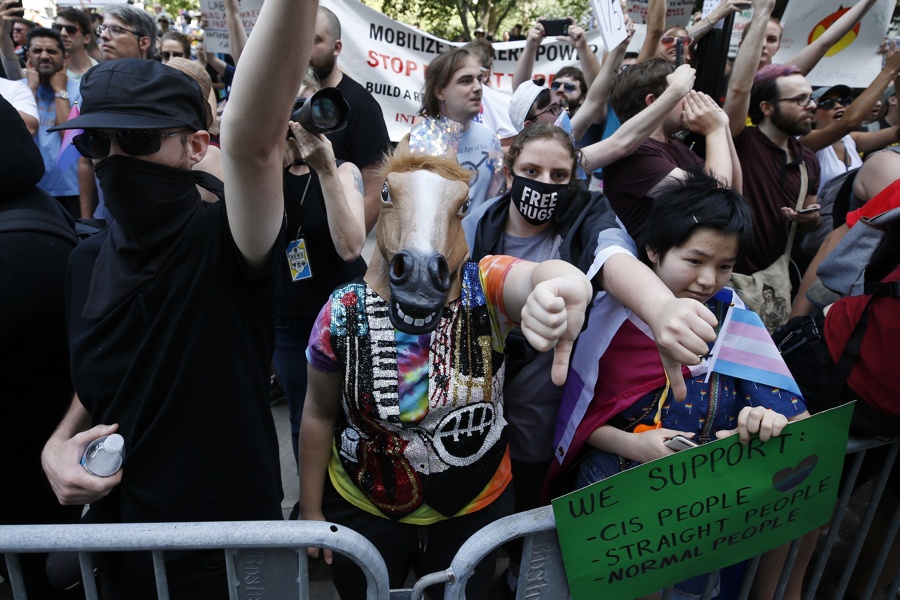 Counterprotesters, including one wearing a horse mask, line the route of the Straight Pride Parade in Boston, Saturday, Aug. 31, 2019. (AP Photo/Michael Dwyer)

After a chaotic two weeks that followed a troll army’s “straight pride” parade—which touched off a legal battle over whether to prosecute the nearly three-dozen people arrested while opposing their message, as well as calls for a probe of how police handled the situation—Boston’s City Council will soon take up another controversial question: whether to ban masks at protests.

On Wednesday, city councilors voted to hold a hearing on a proposed rule outlawing masks, hoods, and other face coverings designed “to conceal the identity of the wearer” while on public property. The idea comes from City Councilor Tim McCarthy, who says such a rule is needed to protect police officers from protesters who he believes are covering their faces to cause mayhem with impunity and get away with violent crime.

“These protesters were not in Boston for a peaceful comment on a certain parade,” McCarthy wrote in an emotionally charged official request for a hearing last week. “They were here to cause violence, they were here to attack Boston Police Officers, [and] attack the City of Boston itself.”

McCarthy elaborated on his fears in a speech at Wednesday’s meeting, which a group of Boston police officers attended:

My question is simple: When did protesting that equals violence become society’s norm? When did society say it was ok to throw cups of urine and bottles at police officers? When did people wake up in the morning and say, ‘Hey lets go to a peaceful protest but don’t forget your razors and your keys for handcuffs and your face masks in case you get urine and bleach that we’re throwing at the cops—you don’t want to get that in your own eyes. And, oh, don’t forget the trash barrel shield that I made out in the backyard, make sure you bring that. And, God forbid, don’t forget to bring your mask.’

While he didn’t mention it by name, McCarthy’s complaints reflect the fears stirred up by the rise of anti-fascist, or “antifa,” demonstrators, who believe it’s necessary to confront hardcore right-wing agitators directly and, over the past few years, have taken part in violent clashes, including in Boston. To avoid being identified by police, who now routinely film even non-violent protesters, or online trolls who might track them down, antifa affiliates have been seen showing up at protests dressed in all black and covering their faces with bandanas.

McCarthy is not the only one who believes it’s time for a crackdown. Republican State Sen. Dean Tran told the State House News Service last week he is also drafting an anti-mask bill.

At Wednesday’s meeting, McCarthy’s colleagues said they were open to discussing such a rule, but wanted exemptions for religious head-coverings, and sought to ensure the policy would be applied evenly, regardless of whether the masked protesters in question are disfavored by police.

Councilor Josh Zakim also pointed to the complicated history of masks in protest: Some of the first face-covering bans came in response to the rise of the KKK, but Boston is also proud of its Tea Party protesters, who, according to legend, disguised themselves as Native Americans before heaving British tea into Boston Harbor. “There is a place for anonymity in political discourse and protest,” Zakim said.

Councilor Lydia Edwards pointed out that making someone protest without a mask on doesn’t necessarily stop violence—just ask the torch-bearing white supremacist in Charlottesville who drove into a crowd of protesters with his car, killing one of them. And she suggested any discussion of an anti-face covering rule also include looking closely at how police use surveillance and facial-recognition at protests (The technology is, after all, a looming threat in Boston).

Councilor Kim Janey, meanwhile, suggested holding a hearing on the protocols for police when dealing with large crowds. Activists have criticized the aggressive police response to counter-protesters who disobeyed orders to clear Congress Street after the “straight pride” rally, focusing their attention on one bike patrol captain in particular who was seen on video spraying pepper spray in protesters’ faces over and over again.