Here’s What You Missed at the Boston Youth Climate Strike 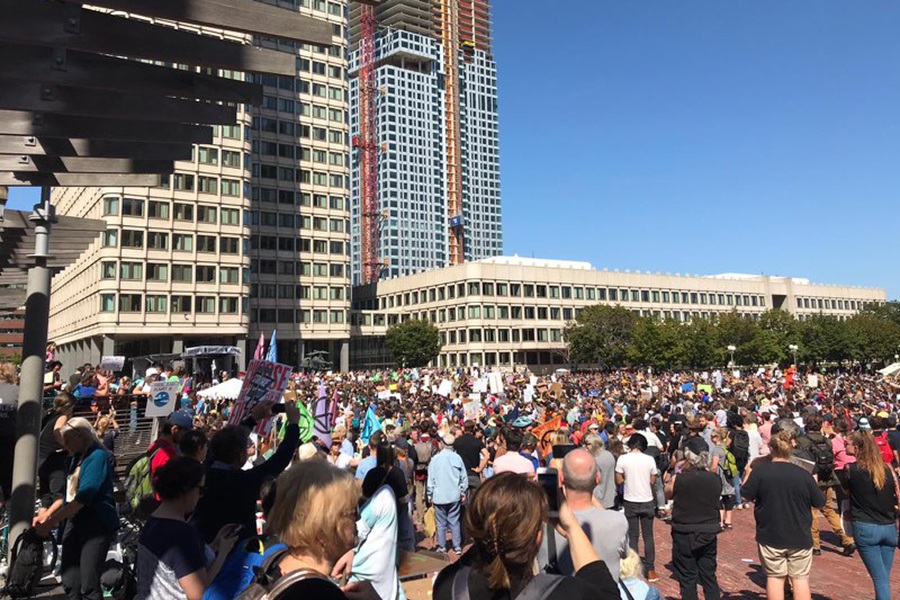 Friday, the young people of Boston skipped school to join youth across the globe in a worldwide “strike” to call for action on climate change. Organized by Massachusetts Climate Strike, a group of youth activists all younger than 20, the all-day event included community events, a rally with speakers, and a march to the State House, in hopes of drawing attention to three demands: For Charlie Baker to declare a climate emergency, for a just and equitable transition to the Green New Deal, and for a renewed commitment to the rejection of fossil fuels.

Couldn’t join the teens on the front lines? Get a glimpse into what you missed below.

Hell. Yes. 👏🏼🌿 The youth of Boston have SHOWED UP for mama earth 🌍 #ClimateStrike pic.twitter.com/sTSBzdzQg0

They came bearing signs, of course.

I’m loving all the #ClimateStrike signs spotted on the train today. pic.twitter.com/5Tu4EpNpb3

While the event was organized by young people, climate change activists of all ages joined in.

MIT and Kendall Tech workers crossing the Longfellow bridge over the Charles River walking to the #ClimateStrike in City Hall Plaza. pic.twitter.com/vJhAoZadK9

Many local lawmakers also turned up to show their support. Even Elizabeth Warren sent a message of solidarity from the campaign trail.

.@EdMarkey in the crowd at Boston #ClimateStrike @necn @NECNprimary pic.twitter.com/Ch6FHicXqP

When we demand accountability from polluters & climate change deniers—we are thinking of you.

When we challenge offshore drilling & rollbacks on tailpipe emissions—we are thinking of you.

When we fight for clean air, water, and energy—we are thinking of you. pic.twitter.com/RAE2dSz5VH

Thank you @DivestHarvard for inviting me to speak at the #ClimateStrike. Proud to support young people across the city and their efforts to make the world a better place. pic.twitter.com/mq7yAHX0R2

THANK YOU @SenWarren @ewarren for your support of the September 20th Boston Climate Strike! Join thousands at Boston City Hall Plaza this Friday to put an end to the climate crisis and demand a MA Green New Deal. #strikewithus #strikewithusboston @FutureCoalition #elizabethwarren pic.twitter.com/62Ndj0JRE6

After the rally, participants marched to the State House for additional action.

We’ve made it inside. The youth have taken over the State House. This is incredible. #BostonClimateStrike #ClimateStrike pic.twitter.com/bxkZXcmq20