Did You Leave a Portable Toilet in the Middle of I-93 This Weekend?

It was spotted by an early bird driver in Dorchester. 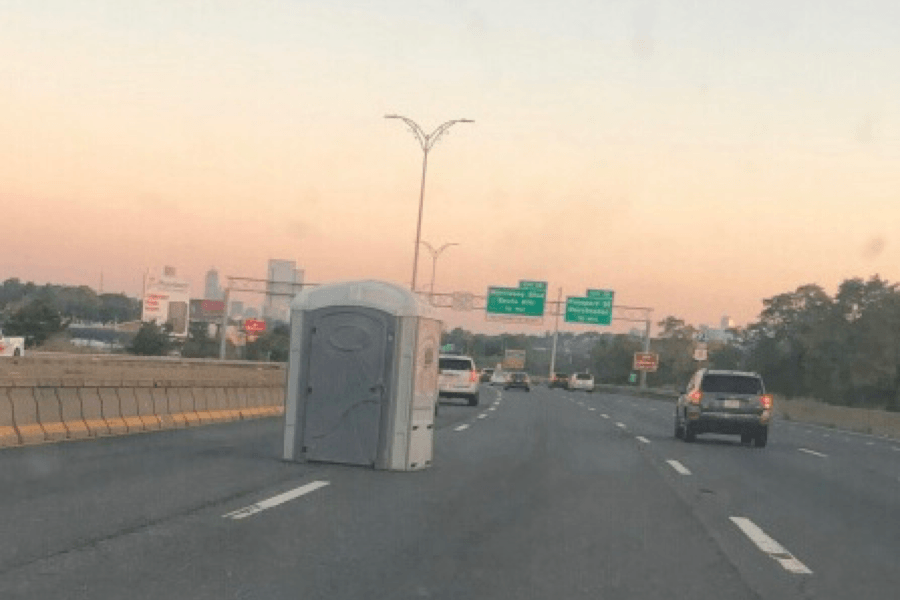 Take the highway into Boston long enough and you’ll see all sorts of things that don’t belong, like a bicycle, for example, or a guy napping behind the wheel of a Tesla, or dozens of bicycles.

But commuters rolling through Dorchester at dawn on Sunday saw something a little, well, smellier sharing the road: a portable toilet.

A photo shared on Twitter by NBC Boston Assignment Manager Scott MacEachern, which he says was sent to him by a friend named Meredith Dooley, shows one of the portable bathrooms sitting upright in the left lane as traffic rolled into the city.

You may have seen this today on ⁦@NBC10Boston⁩ – a friend sent it to me from 93N in Dorchester very early this morning – quite the rest stop …
Courtesy: Meredith Dooley pic.twitter.com/T11fqQBBoK

State Police confirm that there was, in fact, a portable toilet in the middle of the busy roadway Sunday morning. The department says it heard reports about the crappy obstacle on the northbound side of I-93 near Exit 13 at around 6:35 a.m., and that it was promptly removed. There were no reports of accidents caused by the unusual object on the road, and a police spokesman did not have any additional information about where it might have come from, or who might be responsible. Maybe it’s, as one person on Twitter dryly speculated, “a statement about the traffic in boston the last few years.”

Wherever it came from, let’s just be thankful it didn’t bounce into traffic at a busier time of day, and appreciate this Sunday morning driver for capturing this bizarre scenario on camera.