Turns Out Elizabeth Warren Is, in Fact, a Cougar

Here's how she responded to a bonkers accusation from a right-wing provocateur today. 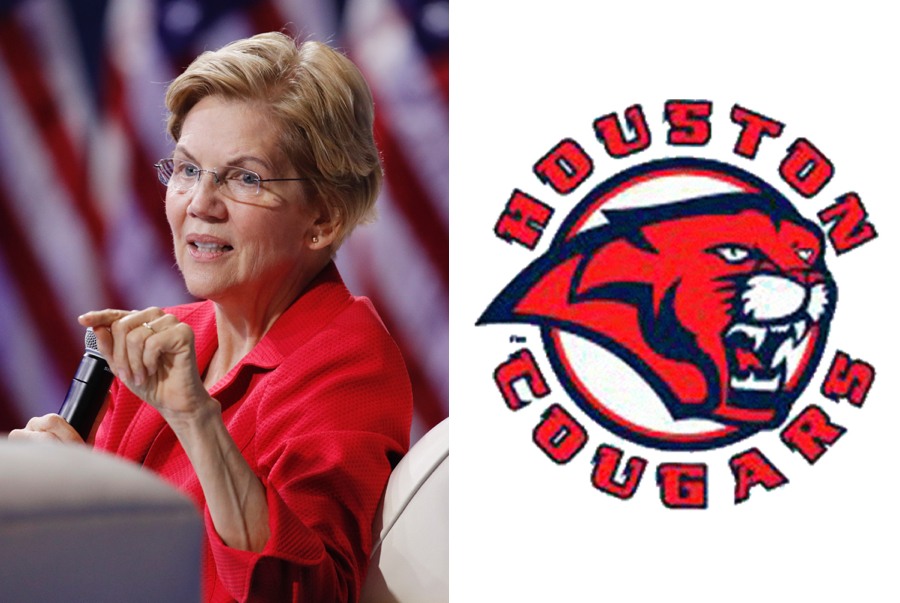 If you just happened to stumble across this tweet from Elizabeth Warren, it probably wouldn’t look all that special.

“It’s always a good day to be reminded that I got where I am because a great education was available for $50 a semester at the University of Houston (go Cougars!)” she wrote in a Thursday afternoon message to her 3.3 million followers. “We need to cancel student debt and make college free for everyone who wants it.”

It’s always a good day to be reminded that I got where I am because a great education was available for $50 a semester at the University of Houston (go Cougars!). We need to cancel student debt and make college free for everyone who wants it. pic.twitter.com/fHasLm0j9P

A presidential candidate reflecting on her bygone college years in support of a policy idea? Checks out, right? Warren did in fact both attend and teach at the University of Houston before her career in politics, and she has in fact called for the canceling of student debt and making a college education free.

If you’d rather not know why this is not just your typical campaign-style message on social media, and why as of Thursday afternoon it had been retweeted thousands of times in just a few minutes, that is fine by me! I promise you, you’re better off not knowing.

But here’s what’s really going on. The tweet comes in response to an allegation from right-wing provocateur and serial fabulist Jacob Wohl, who held another surreal press conference Thursday to accuse Elizabeth Warren of having a sexual dalliance with a 20-something former Marine. I’ll spare you the graphic, lurid details of this alleged affair that Wohl and the supposed accuser shared with the world on Thursday, as the case appears to have been debunked online before the live-streamed press conference was even over. But just know that Wohl has staged similar announcements about other high-profile figures in Washington, only to quickly have his schemes fall apart spectacularly. He’s currently under federal indictment for an alleged illegal securities scheme.

So here’s where Warren’s alma mater comes into play: The press conference featured a video screen with a photo of the senator, along with the words “Elizabeth Warren” and “Cougar?”

Blundering pro-Trump smear artists Jack Burkman and Jacob Wohl are at it again today with another press conference in Burkman’s driveway. As always: these guys love to lie and Jacob is facing a felony charge. I’ll be tweeting sparingly if at all. pic.twitter.com/DY99KgEVsF

The incident quickly went viral on social media, and was one of the top-trending topics on Twitter for Thursday afternoon, which I guess does sort of mean you’ve got to respond. So rather than let the circus go on without any input, but without having to address the substance of the unsubstantiated claims, Warren went another route here.

And you know what? Well-played, if you ask me.