Will There Be Another Operation Clean Sweep? 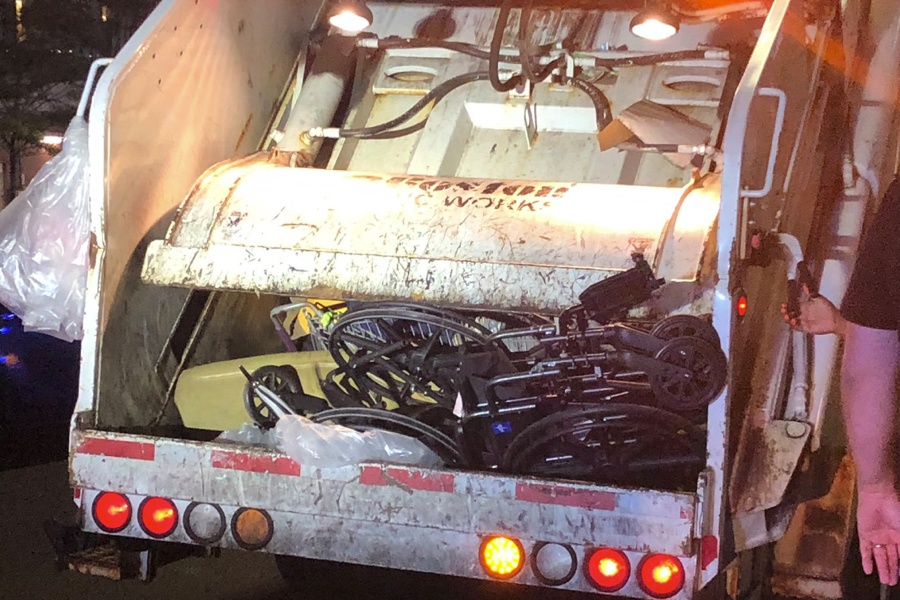 It’s been two months since “Operation Clean Sweep,” when the city’s police force came down hard on addicts and the homeless at Mass. Ave. and Melnea Cass Boulevard, and sparked controversy when they were seen crushing wheelchairs confiscated at the scene. The police response, which led to dozens of arrests, prompted backlash from harm reduction activists, including a march led by the Boston Users Union this past weekend. The ACLU has also filed a lawsuit seeking documents on how exactly the raid came about.

Now that Boston officials are rolling out a brand new strategic plan for the troubled corner of the city, called Melnea Cass/Mass Ave 2.0, can we expect a repeat of the crackdown?

In a meeting on Thursday ahead of the plan’s debut on Friday, BPD Deputy Superintendent Michael Stratton said he didn’t envision a repeat of the shock-and-awe tactics of the August raid, but isn’t ruling it out either. “The response will be determined based on the situation at hand. Are we planning to go down there and have actions like that? Not that I know of,” he said. “If there’s some kind of activity that needs to be addressed, it will be addressed.”

Among many new initiatives, the plan calls for increased patrols in the area from BPD officers and the department’s bike unit, 24-hour fixed posts in the area, new training for law enforcement on substance abuse disorder and new protocols for moving people out of homeless encampments, as well as partnerships with outreach workers and existing shelters and addiction-related nonprofits. Officials say there will be a renewed emphasis on referring more people to drug treatment, as well as a focus on arresting drug dealers.

“We’re going to continue to enforce the laws and quality of life in terms of the neighborhoods,” Stratton said. But “we’re expanding our role as police officers. … Our goal is to go out into the community and proactively engage people suffering from substance use disorder, mental health concerns, and homelessness and try to get them the resources that can help them instead of just going out and moving people from corner to corner to corner.”

The plan involves increasing the number of officers and public health workers walking the streets, setting up new needle exchanges, doubling the size of the city’s team that cleans up discarded syringes, forming a new 24-member task force dedicated to the issues in the neighborhood that will meet monthly, adding eight people to its Street Outreach Team, and hiring four public works employees to aid in clean-up efforts.

A new “dashboard” on the city’s website will also track progress in the neighborhood in real time, officials say, including the number of people workers successfully shepherd into treatment programs.

Officials on Thursday said the goal is to reduce the size of the transient population gathering in the Newmarket Square area by striking a balance between law enforcement and public health, while keeping in mind complaints from residents who are uneasy about crime and drug use concentrated in their neighborhood. Whether that balance includes raids like Operation Clean Sweep remains to be seen.

“On the quality of life side, there is no question that our neighbors and our neighborhoods are being impacted by this epidemic and we are placing an emphasis on that in terms of some of the issues they are experiencing, not only on the ground, not only in their driveways, but also the businesses they visit,” said Marty Martinez, the city’s health and human services chief. “None of this could be possible without having public safety as part of the conversation. And I just want to be clear with you, the plan truly does balance public safety, public health, and quality of life, because the police department is a central piece to this.”

In a statement, Mayor Marty Walsh says the new plan comes in response to “an opioid epidemic of historic proportions that is taking hold of too many lives, and tearing apart families in every city and town in our nation.”

“As a society, we will never turn our backs on people who are at the most vulnerable time in their life,” Walsh says, adding, “There is not one perfect solution to dealing with this crisis, but we are committed to doing everything we can. Our primary focus will always be on the safety and wellbeing of all people in the City of Boston, and I’m asking for us all to work together hand in hand as a community to confront this national crisis.”