As Two Nonprofits Feud, Disabled Workers Are the Ones Losing Out 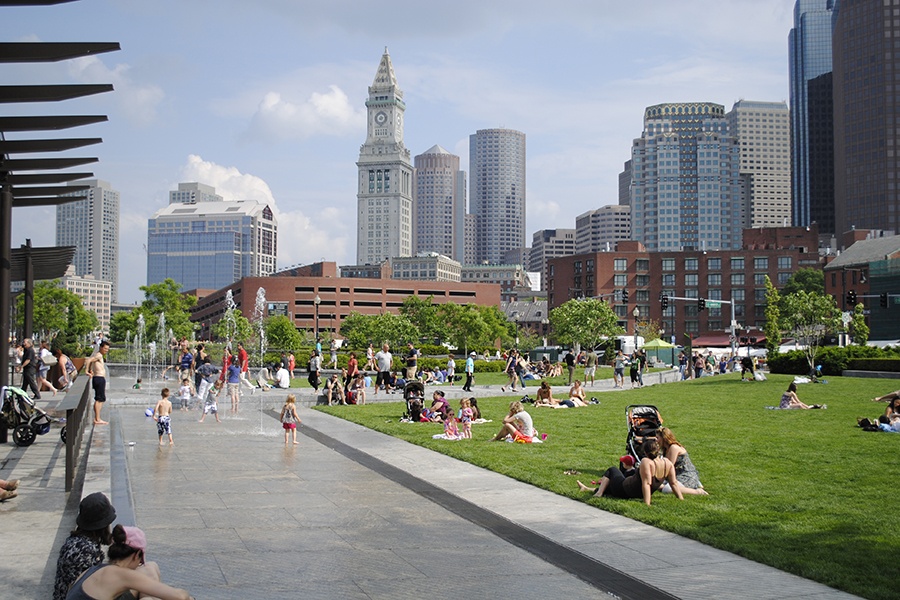 Photo courtesy of the Greenway Conservancy

Update, 10/11/19 11:11 a.m.:  Thursday, WORK Inc. filed a complaint with the Massachusetts Commission Against Discrimination against the Greenway Conservancy and its executive director, Jesse Brackenbury. “We were disheartened and disturbed to lose the employment opportunity at the Greenway and believe that the decision represents a discriminatory action against the individuals with disabilities who we serve,” WORK Inc. CEO Jim Cassetta said in a statement. The Greenway maintains that these allegations are untrue. “While we have not yet reviewed the complaint to the Massachusetts Commission Against Discrimination, the Rose Kennedy Greenway Conservancy is an organization that does not tolerate discrimination,” the group said in a statement. “WORK Inc.’s allegations are false and misrepresent their working relationship with the conservancy and our process.”

They shoveled snow during blizzards. They emptied trash cans on Christmas Day. They mowed, power-washed, and swept the 1.5 miles of the Rose Kennedy Greenway, all seven days of the week, including holidays. But now, a group of disabled workers who helped maintain the Greenway have all lost their jobs, as a partnership between the park and WORK Inc., a Dorchester nonprofit that employs people with disabilities, has come to an abrupt and contentious end. As first reported by the Boston Globe, the Greenway Conservancy has chosen to contract instead with a national for-profit firm, Block by Block, terminating the 10-year partnership between the Greenway and WORK Inc.

Here’s the controversy: According to WORK Inc., the news came out of left-field and was a complete surprise. But the Greenway Conservancy says the transition to a new staffing partner was an overdue, albeit disappointing, necessity.

The two organizations were natural partners—WORK Inc. has provided disabled people with career support since 1965, and the Greenway is named for Rose Kennedy, whose Joseph P. Kennedy Jr. Foundation has donated millions to hospitals, care facilities, and research centers for mentally disabled people since 1946.

About 30 individuals with disabilities have worked at the Greenway since its opening, and four were working there last week when the contract ended, along with a handful of other WORK Inc. employees who were not disabled. WORK Inc. CEO Jim Cassetta says the partnership with the Greenway was highly beneficial for the disabled individuals who worked there, allowing them to form routines they enjoyed, work alongside others with different abilities, and earn paychecks that allowed them to go off of public assistance. He says the loss of the partnership was a painful blow for WORK Inc. “It’s absolutely disgusting,” Cassetta says. “They made a wrong decision. We were doing a great job, and our staff was shocked. They were crying.”

Cassetta says the relationship between the two organizations has been favorable for years. He watched as WORK Inc. employees found their place in the working world at the Greenway and went on to different positions across the city, and had no reason to believe that the partnership wasn’t working out on both ends.

However, the Greenway Conservancy’s Executive Director Jesse Brackenbury’s description of the partnership and the contracting process is drastically different from Cassetta’s. Brackenbury says that the relationship between the organizations has been fraught, and that the Conservancy has reached out to WORK Inc. “repeatedly” about “management challenges” and “insufficient support for workers in the park.” In response to Cassetta, he says, “‘Shocked’ doesn’t seem like the right word to describe a many-month long process with a lot of back and forth.”

In February, the Conservancy issued a request for a new proposal from WORK Inc., a relatively routine occurrence in their partnership. Citing the above problems, the Conservancy proposed a six-month extension on WORK Inc.’s prior contract, pending performance improvement.

According to Brackenbury, WORK Inc. acknowledged the problems and submitted an improvement plan—but ultimately declined the six-month extension the Conservancy offered.

Cassetta tells the story a bit differently, however. After the Conservancy made their problems known, Cassetta says, he rewrote his proposal to include a higher budget that allowed for the increased staffing and improved snow removal equipment that he says the Conservancy had requested. But, he says, the Conservancy rejected his counter-proposal without offering a clear reason why. Cassetta says that, given the chance to negotiate, he likely would have been able to find a way to bring his $753,000 bid closer to his competitor’s bid, which was around $50,000 less, per the Globe‘s reporting. “I even said at least once if not twice or three times, WORK Inc. will work to whatever price you need to be at,” Cassetta says. “We were never given the opportunity to negotiate a fair and reasonable price.”

But to Brackenbury, the reason for accepting competitor Block by Block’s proposal is simple. “Block by Block’s bid was lower, their offering was better, their proposal was better, their management team was more impressive, and WORK Inc., having declined an offered extension that would allow them to improve the performance they acknowledged was problematic, put themselves out of the running with that,” he says.

Brackenbury also believes that working with Block by Block could expand opportunities for people with disabilities to work with the Greenway. While Block by Block is a national for-profit firm, their largest presence is in Boston, and Brackenbury says the group is committed to working with nonprofits in the city. The company, for example, provides cleaning services to Downtown Crossing in conjunction with Project Place, a community for homeless and low-income individuals. In response to a request for comment, Block by Block directed Boston back to the Greenway, and Brackenbury did not say whether or not hiring people with disabilities was written into the agreement between the two organizations. However, he asserted that “there is clear agreement on the importance of it,” adding, “WORK Inc. is not the only organization that can help people with disabilities. They shouldn’t have a monopoly on a contract indefinitely…The specific mission of this place is a great public park and that is what we are in service of.”

WORK Inc. is currently making efforts to find new full-time positions for the workers who are now left without jobs. One has already received a new placement as a landscaper at the John F. Kennedy Library—and Cassetta is positive that, through the power of the 50+ year old agency, the others will shortly be off to new placements of their own. “By the end of next week, all of them will have jobs,” Cassetta says. “I guarantee it.”