Expect Some Potential Flooding, Transit Interruptions, and Strong Winds for the Rest of the Week

Enjoy your October nor'easter, everyone. 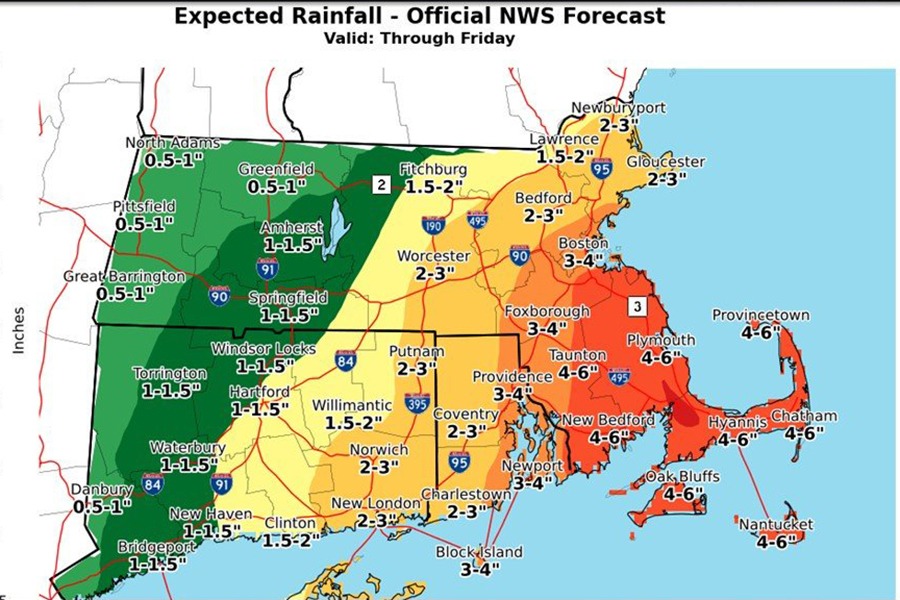 Update, 10/10/19 9:50 a.m.: The National Weather Service now predicts that the heaviest bands of rain will pass south of Boston, and a flood watch for the city has been dropped. However, Boston is now under a coastal flood advisory from 9 p.m. Thursday until 1 a.m. Friday.

Gather your books, blankets, and all things cozy—an offshore coastal storm is getting ready to wallop the Massachusetts coast, and it’s going to stick around for awhile.

After setting particularly majestically Tuesday night, the sun is going on a prolonged break as storm clouds, heavy rain and strong winds roll in. But this isn’t just a quick autumnal rainstorm—this is a three day affair, which National Weather Service meteorologist Nicole Belk says is “unusual for this time of the year.”

“It’ll be pretty close to a washout,” she says of the next three days.

From now through Friday, Belk predicts we’ll see near-constant rain, with about 3-4 inches falling in Boston and 3-6 or as much as 8 inches falling in the southeastern part of the state by the time the week is through. The heaviest is due to arrive this evening and into Thursday, and should taper off Thursday night. There’s a possibility for flooding in poor drainage areas, and the coastline could see significant beach erosion.

The Steamship Authority tweeted that ferries likely will not operate on either the Vineyard or Nantucket routes Thursday. The Massachusetts Emergency Management Agency also told the Boston Globe that flight delays and cancellations at Logan International Airport will likely occur due to the wind gusts.

Belk warns that winds this strong could come with risks. In Boston, and especially in Southeastern Massachusetts, there is a risk for tree damage and power outages. Any loose articles outdoors, like patio furniture, should be secured. Drivers should also be aware that their vehicles could be buffeted by winds, and should proceed with caution. It also wouldn’t hurt to check on your sump pump, unless you like your basement carpeting squishy.

However, there is a silver lining to this very large, lingering rain cloud. While Saturday and Sunday might be a little soggy, the weekend probably won’t be a wash. Conditions should start to improve Saturday, Belk says, and the sun should make its comeback on Sunday. Plus, Belk says, we’re currently forecasted to see higher than average temperatures next week—so keep that in mind when you’re on day 3 of umbrellas and raincoats.