Steve Pemberton says his insurgent campaign was stymied by the state party. 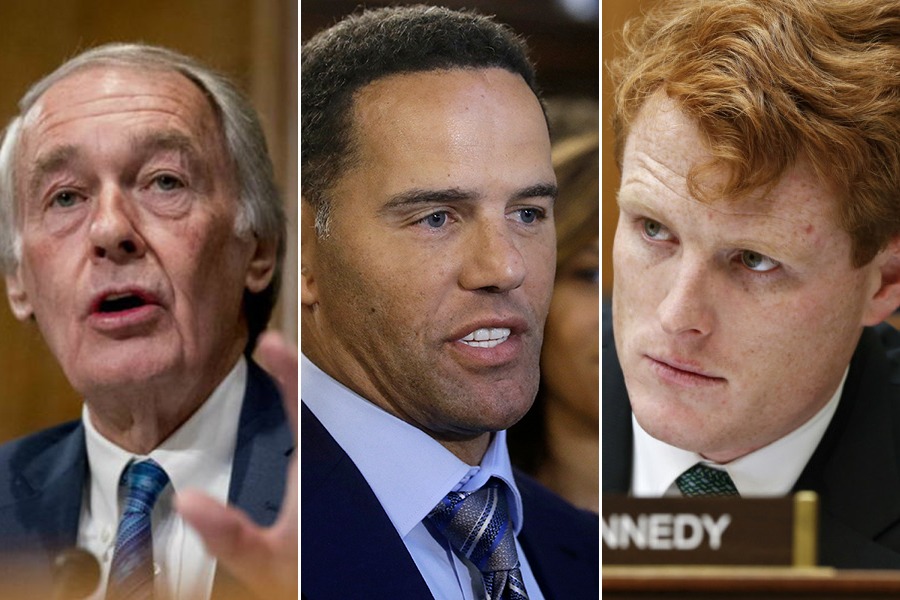 As the race for incumbent Senator Ed Markey’s seat ramps up, it seems that political outsider Steve Pemberton couldn’t keep up the pace. Monday, the author and motivational speaker officially declared he’s dropping out of the race—but he had some choice words to share before retreating.

In a lengthy Facebook post in which he announced the end of his campaign, Pemberton took aim at both the Democratic establishment and the highest-profile Markey challenger, Rep. Joe Kennedy III. In his scathing critique, Pemberton says his campaign was stymied by “an impenetrable wall of legacy and birthright—of incumbency and connections—that so often has stifled and blocked diverse and urgent voices from succeeding in the political arena.”

While he was able to raise nearly $500,000 since launching his campaign in July, Pemberton writes that it quickly became clear that there were roadblocks to Markey’s seat that were “too towering and too irremovable” for a political outsider to overcome. Those with “entrenched power” (read: Kennedy and Markey), he says, are “bolstered by state and federal party bosses who privately blacklist anyone attempting to aid an insurgent campaign while publicly espousing the importance of diversity and inclusivity.”

“They are supported by a campaign finance system that allows incumbents to hoard millions of dollars in special interest PAC money—right up to the point where they ‘see the light’ and conveniently embrace campaign finance reform for short-term political advantage while sitting comfortably on their bloated war chests,” he adds.

Last month, a video released by the Markey campaign accused Kennedy of doing just this—amassing over $41,000 in PAC money over the month of June just before announcing his Senate bid.

Pemberton also claims that he faced criticism from “insiders” and had consultants “forced” off his campaign for breaking an unofficial rule within the party and challenging an incumbent, while Kennedy suffered none of the same consequences. “The message, delivered to me, in word and in deed was abundantly clear: those same rules did not apply to him,” Pemberton writes.

The state Democratic party and the Kennedy campaign did not immediately respond to requests for comment.

During his short-lived run, Pemberton often referenced his biracial heritage, turbulent home life, and childhood in the foster care system, drawing a contrast between his lived experiences and those of the political insiders he was running against. In his Facebook post, he again pointed out these differences, asserting that it is no longer sufficient to elect officials who empathize with experiences like his—there should be, he says, lawmakers who have lived them.

“The Democratic Party will have to find a way to fully embrace those voices rather than deny them because those lives, often unseen, still have value and they should have a place in our public discourse,” he writes. “But until we really challenge this rigged system that favors wealth, longevity and legacy, the public will be denied true choice in the voting booth.”

As the field narrows, the remaining challengers are facing increased scrutiny.  During an interview with a local podcast on Thurday, Kennedy delivered an energizing performance, but struggled to answer the question of why he’s challenging Markey in the first place. Meanwhile, labor attorney Shannon Liss-Riordan, the other Democrat in the race, made headlines last week when the Globe revealed she has loaned her campaign $3 million since May.

Liss-Riordan issued a statement in response to Pemberton’s post, saying, “I thank Steve Pemberton for putting himself out there and raising some important issues about our democracy. Since entering this race, I too have encountered some of the same obstacles Steve described.” She also blasted the Democratic Party for “failing people,” but ended on a more positive note, saying, “I’m excited by the response our campaign has been receiving and am eager to debate the real issues facing people here in Massachusetts. I enjoyed getting to meet Steve on the campaign trail and wish him and his family the best.”

Struggling to stay abreast of all the who’s who on the campaign trail? Catch up with our primary guide here.