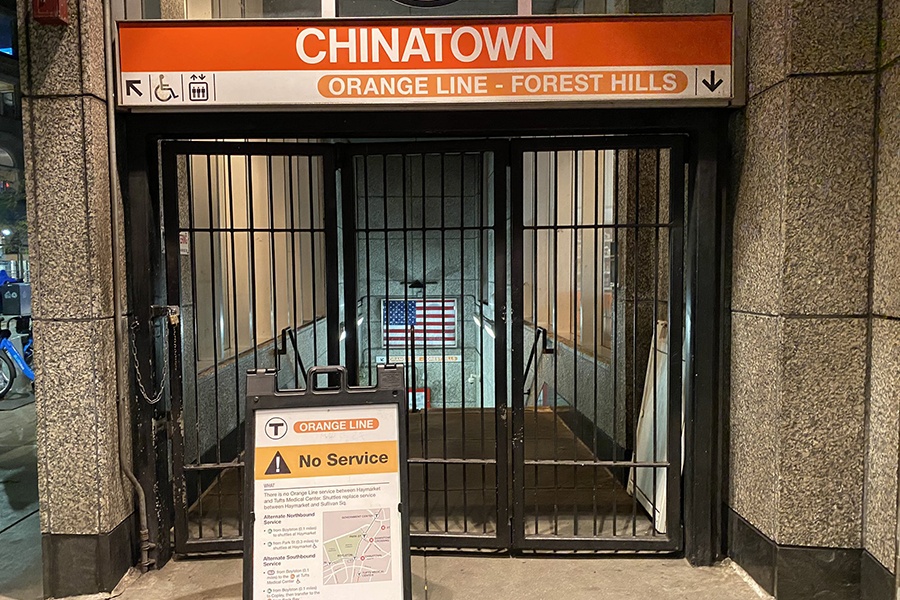 Update, 10/21 2:23 p.m.: The MBTA has tweeted that work on the Orange Line has been completed and safety tested, allowing regular service to resume. A scheduled closure between Wellington and Oak Grove from 8:15 p.m. until the end of service Monday night has also been cancelled.

As part of its aggressive new weekend repair schedule, the MBTA shut down the Orange Line from Sullivan Square to Tufts Medical Center Friday night at 8:45 p.m., intending to open the stretch back up at the beginning of service on Monday. However, the overnight work schedule was interrupted due to an accident, which meant that the track replacement work was not completed in time and the eight stops in the middle of the line had to remain closed—during the Monday morning rush hour.

Chaos, of course, ensued, as all the passengers displaced from the city’s most reliable and second-most popular line had to rework their routes to their morning destinations via the other lines, replacement shuttles, and ride shares. Crowds bottlenecked into hapless Green Line trolleys. Strangers sardined into buses. Those not aggressive enough to squeeze into packed trains really got to know the ads on loop on the Park Street and North Station TV screens. And many, many bored and enraged commuters took to Twitter to air their grievances.

People are rushing & cramming to get a seat on the shuttle buses that are picking up affected #OrangeLine riders. @wbznewsradio pic.twitter.com/vu70bLv4br

Waiting for the #redline at Ashmont. We are all in for a Hunger Games level commute #MBTA pic.twitter.com/LYv5Qbj73T

Hey @mbta since the #orangeline isnt running and we have to take the green line at North Station maybe run more trolleys? Thanks @universalhub pic.twitter.com/UmBXta0jWm

My commute in a series of photos #mbta #refund @universalhub pic.twitter.com/So3TdNBLf6

According to an e-mail from MBTA spokesperson Joe Pesaturo, the accident that caused the delay involved two pieces of construction equipment. One worker sustained a minor injury, and an investigation into the cause of the accident is underway. The MBTA has not yet revealed when the remaining track replacement work will be completed.

“The MBTA apologizes for this unexpected disruption in service,” Pesaturo wrote.

The track replacement work is part of a larger expedited MBTA repair plan for the Orange, Red, and Green Lines that the Baker administration announced late this past summer in response to mounting public pressure after this year’s six derailments. The closures, which are scheduled for almost every weekend from September through December, will allow the MBTA to replace several large stretches of track on each line, in addition to making cosmetic and accessibility upgrades.

“To my knowledge, we haven’t done anything with this level of intensity [before],” the MBTA’s general manager, Steve Poftak, told the Boston Globe when the plan was unveiled.

Spent time today spotlighting weekend work on the @MBTA that will upgrade tracks on the Orange Line. This work, made possible through necessary diversions, is part of our 5-year, $8 billion investment plan aimed at improving reliability and boosting capacity across the system. pic.twitter.com/tRAtBQ82om

Hopefully, the Orange Line will be back to normal by this evening’s rush hour commute. If not, this group of children has officially come up with the scariest Halloween costume in town.