Is It Time for Charlie Baker to Leave the Republican Party?

The governor has done everything he can to distance himself from the GOP except walk away. It’s time he does just that. 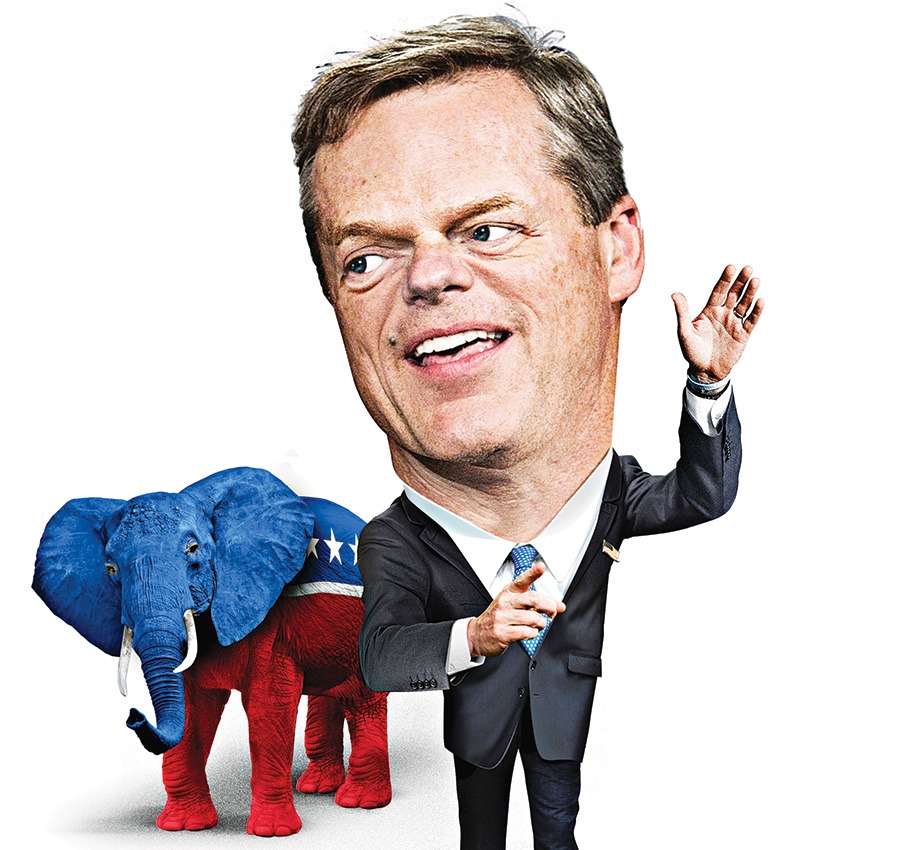 It’s no secret that for the past decade, Charlie Baker has awkwardly attempted to coexist with the increasingly toxic Republican Party. From the Tea Party movement to President Trump, Baker has tried constraining the party when possible, co-opting it when convenient, and, most recently, distancing himself from it as necessary. So it is in the spirit of truth and transparency that I say: The moment has finally come for Baker to re-register as an unenrolled voter and officially leave the GOP.

Trying to get along with his party has never quite worked for Baker. Just look at the 2010 gubernatorial race, when he cozied up to the Tea Party wing and ended up tarnishing his moderate reputation and losing the election. Since then, he’s been like the relative who keeps his mouth (mostly) shut at Thanksgiving dinner to maintain the peace—and emerged as the country’s most popular governor in the process. But the sins of Donald Trump’s 2020 GOP—anti-democratic abuses of power, dishonesty, and corruption—are too great to continue to look the other way. After all, one of the reasons Trump gets away with his current behavior is because the Bakers of the party—including Mitt Romney and Susan Collins—sit on their hands in a self-serving effort to go along and get along. By leaving, Baker would send a clear message to Massachusetts residents—a majority of whom are unenrolled themselves—that what the party is doing now truly isn’t okay.

Don’t get me wrong: Leaving the party would be no small thing, especially if Baker intends to run for a third term in 2022. The party machine does real work and he would lose political donations and a grassroots ground game. Perhaps the toughest hurdle for the governor, however, is simply the psychological reluctance to concede that his tolerant, responsible, New England–style Republicanism has lost the fight for the GOP’s soul. While many voters in Massachusetts carry a torch for a moderate counterbalance to unaccountable one-party progressive politics, Baker’s departure would serve as a clear admission that the only way to save the GOP is to leave it—which is exactly the conclusion he should now accept, and act upon.

July 2016: Signed the transgender-rights bill in the face of his conservative brethren mocking it as the “bathroom bill”—a flip from his position during his ill-fated 2010 run for governor. In 2018, he doubled down by endorsing a ballot measure to maintain the law.

August 2016: Threw cold water on darling of the right Curt Schilling’s plan to run for Elizabeth Warren’s Senate seat. Chilly remarks such as “I admire the guy as a baseball player bigtime” made clear he didn’t want to campaign within 100 miles of Schilling.

September 2017: Testified against efforts by Republican in chief Donald Trump and congressional cohorts to repeal the Affordable Care Act, a.k.a. Obamacare.

February 2018: Called for a federal ban on assault-style weapons. Any Republican willing to defy the NRA and risk losing campaign cash can’t be all red.