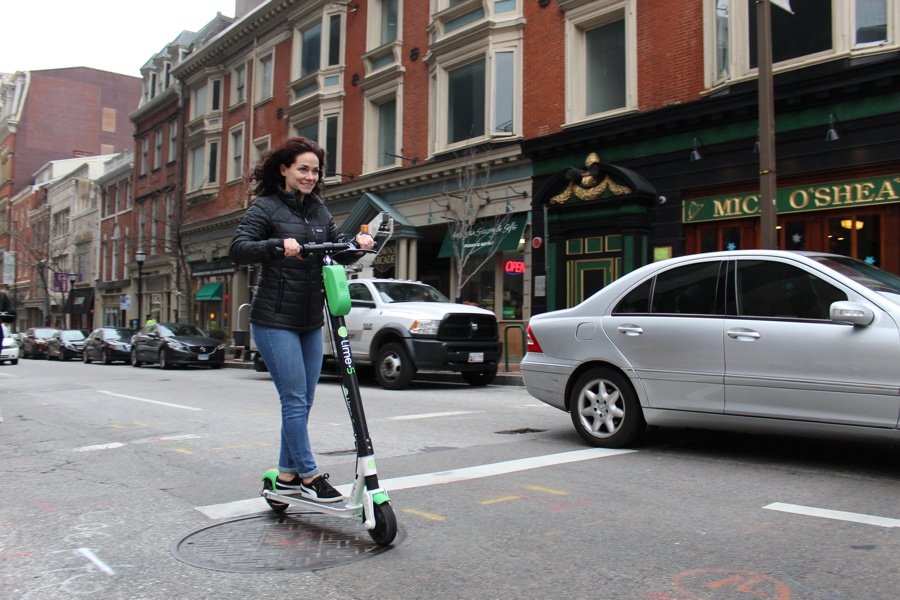 If you’ve been to Brookline at any point over the past several months, you’ve no doubt spotted them: People zipping down roadways and bike lanes atop motorized e-scooters, which are unlocked with a smartphone app and travel at up to 15 miles per hour.

Since April, the town has been in the midst of a closely watched pilot program, where scooter companies Lime, Bird, and Spin have been allowed to dispatch the dockless devices on a trial basis to see how well they mesh with drivers, bikers, pedestrians, and other commuters. The pilot ends November 15. If it goes well, the town may opt to allow the devices on their streets, and other cities may soon follow.

In the meantime, there are some promising signs. According to an internal Lime survey of 173 riders, which the company provided to Boston, about 30.8 percent people who use Lime in Brookline said they’d opted to take an e-scooter over a car, be it their own or one operated by a ride-hailing service. Those figures are similar to results seen in other cities, including Portland, Oregon, which found 34 percent of riders chose a scooter over a car during its e-scooter pilot last year. And they could mean that a wider adoption of e-scooters regionally could cut down on the city’s infamous traffic woes.

“One of the biggest complaints that we have in Boston is that you can’t get anywhere—it takes too long. We don’t have an endless supply of capacity on our roads, and cars are incredibly inefficient,” says Heather Hamilton, a Brookline select board member who championed the pilot program. So more options, like e-scooters, along with better bike infrastructure, including protected lanes, could go a long way toward unclogging streets. “It’s kind of this momentum effect. You see other people doing it, especially people passing you while you’re sitting in your car or Uber, and you’re like, ‘Why am I spending $12,000 a year on this car when I could be getting there faster and cheaper?'”

The one-in-three figure is similar to results seen in other cities, according to Scott Mullen, regional expansion director for Lime. “That number has been consistent across markets of all types,” he says in an interview. “To see these numbers in Brookline be so consistent with what we’re seeing in the U.S. and Europe really speaks to the power of this type of mobility to actually give people new options.”

As of early October, more than 19,000 people had taken more than 156,000 scooter rides total in Brookline during the pilot, according to the town’s statistics. Six crashes had been reported by Brookline PD, along with 14 reported via the companies themselves. Police also said they had made 569 scooter-related traffic stops.

Reported Crashes:
6 via @BrooklineMAPD
14 via companies

Lime’s new internal survey also offers a closer look at who, exactly is using the scooters, and why. According to a summary of the results, it’s a diverse bunch. The average age of a Lime scooter rider is about 32, and about half live in households that make less than $75,000 a year, with 30 percent making less than $50,000. About 82 percent of the riders surveyed identified as white, 10 percent Asian, and 8 percent Hispanic. Sixty-one percent identified as male. About three-quarters of Lime scooter users in the town said they lived, worked, or went to school in Brookline. Roughly half of riders said they’d used a scooter as a way to get to other forms of public transportation.

A common concern about the scooters is that few riders wear helmets, given the fact that the devices are designed to be a convenient option that can be activated on the go, and people don’t generally carry headgear at all times. Indeed, the survey showed just 31.6 percent of respondents said they wore helmets regularly. The Lime app warns riders to respect the boundaries of the pilot program, as users are only supposed to ride within city limits. According to the survey, 95.5 percent of riders said they had respected that rule.

Maybe unsurprisingly, the Lime scooters are popular among people who use them. Among riders surveyed, 93.5 percent said they wanted the town to embrace the devices permanently. But they, of course, are not the only ones with any say in the matter. Brookline residents will get the chance to weigh in on the pilot at a community input meeting Wednesday night. Then on Thursday, the town will launch a survey of its own, open to pro- and anti-scooter residents alike. The results are expected to be released in January.

Scooter skeptics are likely to paint a different picture of what it’s like sharing the streets with the devices, which the town’s select board will have to consider before making a decision about whether to go forward with a scooter program full-time. “Some have claimed this has incentivized them to drive more, because they don’t feel safe walking around,” Hamilton says. “I think that’s anecdotal, but we’re just trying to collect as much information as possible.”

The town is also still waiting on the state legislature, which has been chewing on bills that would clarify the laws on the devices but have not yet put up any for a vote.