He was celebrating the second place finish of Maria Esdale Farrell. 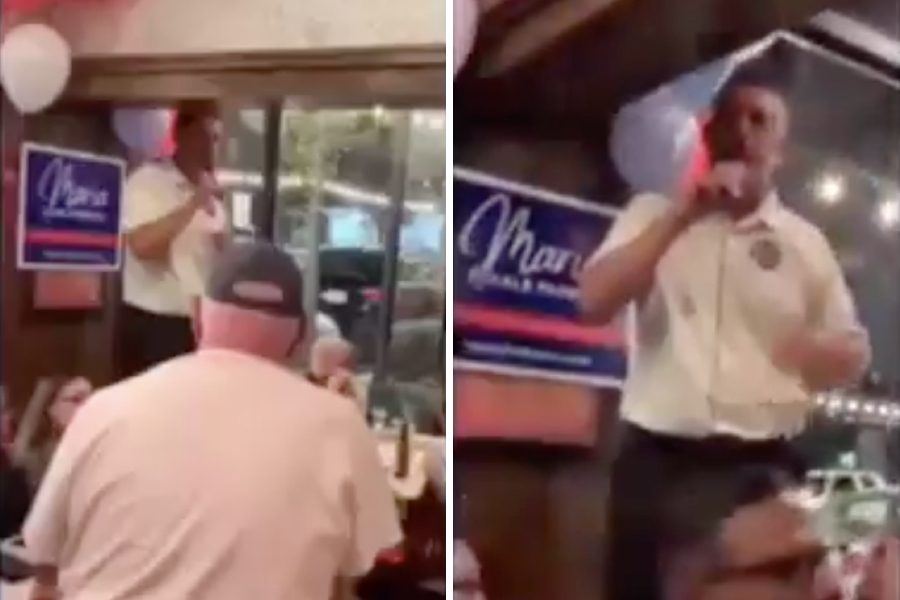 Screenshots of video via Chip Goines/Twitter

Boston City Councilor Tim McCarthy was clearly in high spirits the night of September 24, in the hours following the preliminary city council elections. After an eight-way contest for his District 5 seat, the candidate he’d hoped would succeed him, Maria Esdale Farrell, had clinched the number two spot, meaning she would advance to the election in November.

To get there, Farrell had campaigned against a diverse slate of black, Haitian, and Latino candidates, which observers had noted was reflective of the changing racial makeup of a district that includes Mattapan, Roslindale, and Hyde Park. Farrell is McCarthy’s former education aide. Her top competition had been Ricardo Arroyo, whose father and brother had both been elected to the city council. Arroyo, who is of Puerto Rican descent, finished first.

They celebrated the good news at Antonio’s Bacaro, an Italian restaurant in Hyde Park, and at some point McCarthy grabbed the microphone to give an impassioned victory speech.

Speaking to a virtually all-white crowd, Bos City Councillor @McCarthy4Boston said this about Farrell’s win in the prelims:
“We ran against women,
we ran against minorities,
we ran against nonsense people […] b/c they don’t have boots on the ground…” Big yikes, dude. #bospoli pic.twitter.com/AEl5bPmy3R

A snippet of the video, which is grainy and appears to have been captured via smartphone, appeared on Twitter Tuesday night via user Chip Goines, who says the speech was given “to a virtually all-white crowd” and has accused the councilor of “dog-whistling.” It has since been shared many times online. It was not immediately clear who shot it.

Neither McCarthy, who announced he would not seek reelection in January, nor Farrell have responded to requests for comment.

In a post on Facebook Wednesday, McCarthy said he believed critics of his comments were taking them “out of context” and apologized to anyone “who misunderstood my intent.” He also said in the post that while he had supported Farrell’s campaign he had not formally endorsed Farrell.

“What I … tried to express, but clearly did so in a muddled manner, was my excitement at casting my personal ballot for a working mother of six, who, without the usual laundry list of political endorsements, had defied all odds and won a spot in the finals against such a deep and diverse field, including one with a massive advantage in name recognition, money and, yes, political endorsements. I further wanted to convey, but again did so poorly, that her win surprised a lot of people who didn’t give her a chance and overlooked all the grassroots support she had inspired,” he wrote. “In my excitement to praise her, if I said anything that could be taken out of context to hurt her, I apologize to her, and to anyone else who misunderstood my intent.”

McCarthy did not explain to whom he was referring when he mentioned “nonsense people.” Arroyo, who came into the race with decades worth of name recognition, had earned the support of state Rep. Russell Holmes and Suffolk County Sheriff Steve Tompkins as well as the Boston Globe editorial board. The Bay State Banner reports that Arroyo has since been endorsed by several of his former challengers in the race, as well as by Congresswoman Ayanna Pressley and District Attorney Rachael Rollins.

In a statement from manager Patrick Keaney, Arroyo’s campaign says it opposes “all attempts to divide our communities,” adding that “it is unfortunate that others have chosen to use divisive language and have resorted to name calling.”

We are committed to running a positive campaign, centered on justice and equity, and focused on the issues that impact the residents of District 5. We oppose all attempts to divide our communities and it is unfortunate that others have chosen to use divisive language and have resorted to name calling. We believe the residents of Hyde Park, Mattapan, and Roslindale will reject the politics of division and we are proud of every person who has endorsed Ricardo’s candidacy. We will continue to run an inclusive campaign that welcomes everyone regardless of race, gender, age, sexual orientation or religious belief and as a Boston City Councilor Ricardo will be dedicated to ensuring District 5 is a welcoming community for all.

This post has been updated to include McCarthy’s statement and to reflect that he had not formally endorsed Farrell.