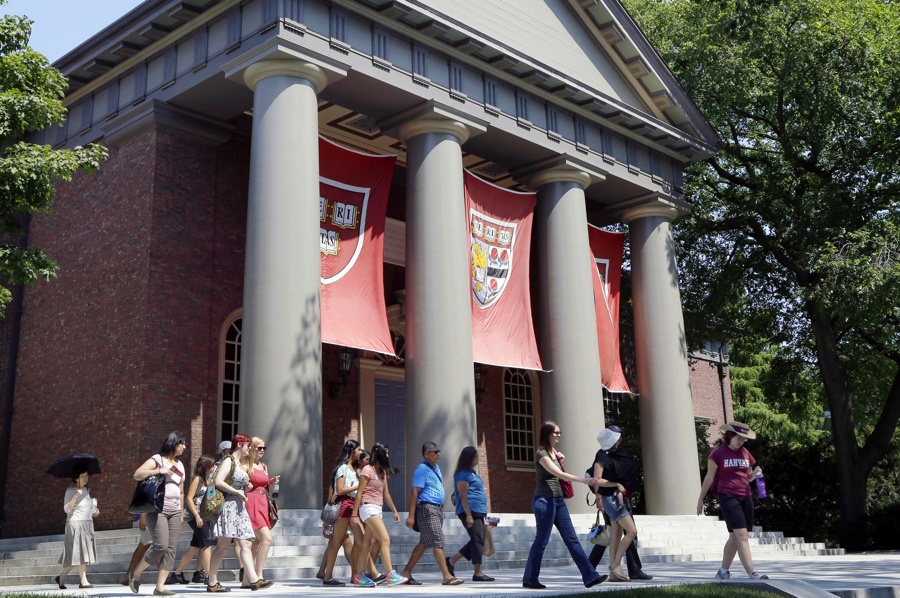 On September 12, immigrant advocacy group Harvard College Act on a Dream staged a 100-person strong protest in front of the university’s Memorial Church calling for the abolition of United States Immigration and Customs Enforcement, to “start the energy rolling” for a new semester on campus, a representative from the group said at the time.

As a campus newspaper is wont to do, The Crimson covered the rally, publishing a relatively innocuous story and photos from the event the next day. Now, however, the story is back in the spotlight over a month after it was first published, all because of one line: “ICE did not immediately respond to a request for comment Thursday night.”

A journalist reading this story might skim right over that sentence. Reaching out to a government entity is a familiar experience for most news reporters, and while it often earns no response, it’s standard practice to offer any criticized entity in a story a chance to respond. It’s the eighth bullet point in the Society of Professional Journalists’ Code of Ethics: “Diligently seek subjects of news coverage to allow them to respond to criticism or allegations of wrongdoing.”

To other readers, however, the sentence that demonstrated that The Crimson had attempted to reach out to ICE was evidence of the newspaper’s cultural insensitivity and negligence. Reaching out to ICE, Act on a Dream says, “blatantly endangers undocumented students on our campus.” That’s why the organization has launched a petition condemning The Crimson‘s actions, calling on the newspaper to apologize for the “harm they inflicted” upon the undocumented community, change their policies that require reporters to request comment from ICE, and declare a renewed commitment to the protection of undocumented students on campus.

“A request for comment is virtually the same as tipping them [ICE] off, regardless of how they are contacted,” the petition reads. “We strongly condemn their decision to uphold a policy that blatantly endangers undocumented students on our campus. The Crimson, as a student-run publication, has a responsibility to prioritize the safety of the student body they are reporting on — they must reexamine and interrogate policies that place students under threat. Responsible journalism includes being conscious about the impact caused by their actions as a news organization.”

The petition was co-signed by 10 other campus organizations, including Divest Harvard, Harvard College Democrats, and Harvard Fuerza Latina. Since it went live two weeks ago, the petition has gathered nearly 680 signatures, toward a goal of attaining 1,000.

The petition comes weeks after The Crimson met with Act on a Dream to allow the group to voice their concerns in person, after reading criticism on social media. In this meeting, Act on a Dream, says, the student journalists “stood by their decision to call ICE and stated that they would do so again,” thus triggering renewed action from the group.

Yesterday, The Crimson‘s editor-in-chief, Kristine Guillaume, and managing editor Angela Fu published a public response to the petition, stating that they were careful and intentional about the way they contacted ICE and standing by their choice to uphold “one of the core tenets that defines America’s free and independent press.”

“Let us be clear: In The Crimson’s communication with ICE’s media office, the reporters did not provide the names or immigration statuses of any individual at the protest,” they wrote. “We did not give ICE forewarning of the protest, nor did we seek to interfere with the protest as it was occurring. Indeed, it is The Crimson’s practice to wait until a protest concludes before asking for comment from the target of the protest—a rule which was followed here. The Crimson’s outreach to ICE only consisted of public information and a broad summary of protestors’ criticisms.”

The choice has proved controversial well beyond the gates of the Harvard Yard. Professional journalists from around the country have jumped to the Crimson’s defense, reminding their Twitter followers that gathering commentary from all parties in a story is a standard journalistic practice.

Good for @thecrimson for issuing this statement, and not good at all that it needs to be made:https://t.co/57rv3FGnMB

Salute these journalists @thecrimson for standing up for reporting. https://t.co/mRN9nUzQA6

The Harvard student newspaper covered an anti-ICE rally & afterward contacted ICE for comment. Because of this normal act of journalism, the rally organizers have tallied 670 petitioners demanding an apology & change in editorial policy. Good grief. https://t.co/XnTbPPM1AD

However, others have pushed back on the deluge of praise for The Crimson, arguing that talking to ICE is different from requesting comment from other governmental agencies.

The journalism standard of allowing all parties mentioned to respond is a good one if you’re talking about individuals or unknown or lesser known actors whose guilt or wrongdoing may be in question, sure. ICE is not one of those groups. Feels like that question has been answered.

People have been targeted for deportation for talking to the press. It’s happened in enough jurisdictions that it’s reasonable for reporters to talk to our sources about the possible outcomes, good and bad, of their names appearing in print. I’m assuming that didn’t happen here.

This is not the first time this school year that immigration has become a hot topic on campus. At the beginning of the semester, a Palestinian student was denied entry to the U.S. en route to his freshman year at Harvard. While he was eventually able to make it to campus in time for the start of classes, the incident triggered passionate responses from immigration advocates.

Act on a Dream did not respond to a request for comment on this story. Kristine Guillaume declined to comment further and referred us to her note to readers.
Read More About:
Alyssa Vaughn Contributor @alyssacvaughn