Our Dreams of a Seaport Gondola Have Been Dashed

It was a fun idea while it lasted. 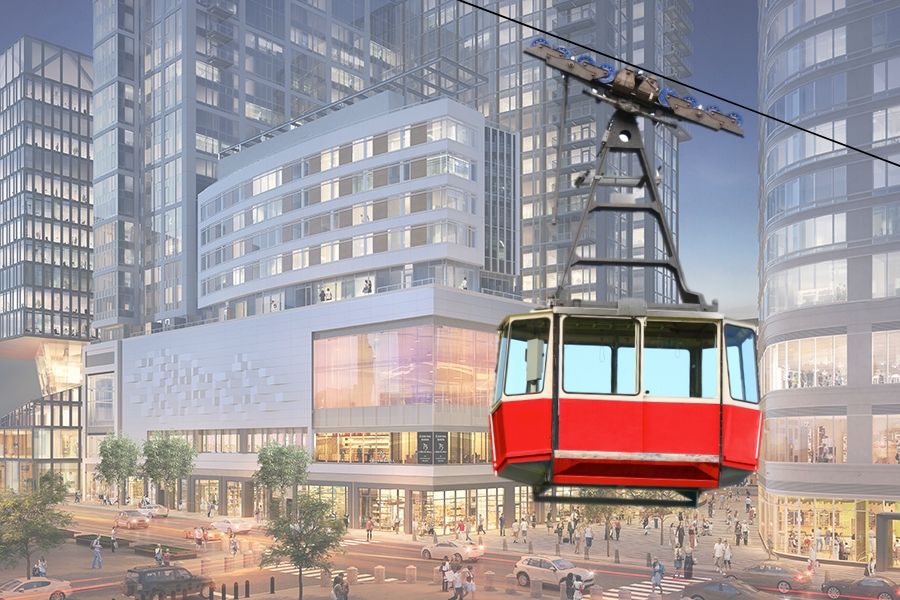 They’ve cut the cord. Developer Millennium Partners is now moving away from their plans for a $100 million sky gondola system. It would have spanned Fort Point Channel, connecting South Station to the Seaport, but is now off the table, the Boston Business Journal reports via a source with knowledge of the project. In a new proposal, the firm will instead support the city of Boston’s Seaport transportation study, which has primarily focused on the (significantly-less-cool) modes of bus and water transportation for the disconnected district.

“This is a totally new proposal and the alternative transportation solution proposed in an earlier project iteration is no longer accurate,” a representative of ICCNE LLC, the Millennium affiliate spearheading the project, told Boston via e-mail.

Buzz about the developer’s plans for the whimsical, futuristic aerial tram system had circulated for years. However, it started to feel like the project might actually come to fruition in 2017, when Millennium released a promotional video for the project and built a model of one of the gondola pods to display to city officials.

“This gondola system would carry the equivalent of 40 buses per hour, while reducing vehicular traffic and eliminating carbon emissions,” Rep. Stephen Lynch told the Globe last year. “While the route of the gondola may change, I am totally committed to working with Mayor Walsh to move this process forward.”

True, the idea still seemed pretty far-fetched, and the Massachusetts Port Authority reportedly rolled their eyes at the project behind closed doors, but we all wanted to believe it could happen. The gondolas presented a solution to a very real problem faced by many Boston workers: the fact that the so-called Innovation District’s snail’s pace traffic and lack of T stops or bike lanes makes it a huge pain to travel to. With this gondola plan, Seaport workers would have gone from having one of the city’s worst commutes to the coolest one in town.

Without support from the city, however, the trams couldn’t get off the ground. Pressure also mounted as Millennium Partners struggled to get plans for its massive, 2.7 million square foot office campus planned for the Seaport approved. The campus, which was slated to serve as the Seaport terminus of the gondola system, keeps getting trimmed back thanks to a dispute with Massport, and last week, the project was down to a compact 381,000 square feet.

So we probably won’t be flying over the gleaming glass buildings of the Seaport anytime soon. But that doesn’t mean all hope is lost for area commuters. The BPDA’s South Boston Seaport Strategic Transit Plan, a study with the aim of identifying “specific recommendations to improve the operations and capacity of the transit network serving Boston’s Seaport District,” wraps this winter. At a public meeting earlier this month, the BPDA revealed some of the new transit strategies under consideration for the Seaport: ferry service, a “Seaport circulator,” “dedicated transit corridors” for buses, and of course, scooters.