Hear Ye! The Freedom Trail’s Tour Guides Have Had Enough

They may dress like the Founding Fathers, but the freshly unionized Bellringers Guild wants a 21st Century contract. 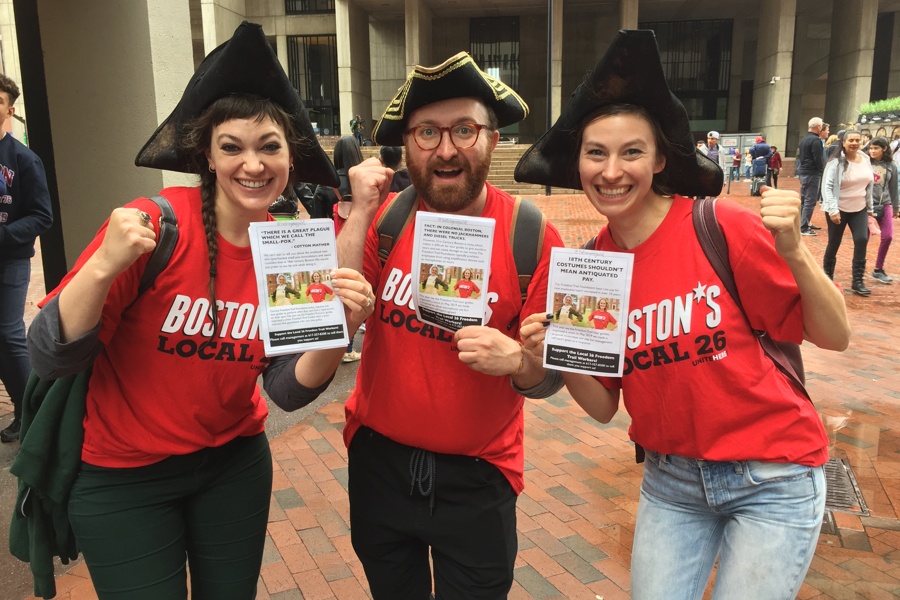 Most of the time, Emma Wiegand loves her job. As one of the three dozen tour guides who steer tourists around Boston’s historic Freedom Trail in Colonial Era outfits, she sees herself as an ambassador for a city with deep and abiding ties to the nation’s founding. Plus, as a trained performer and music teacher, she’s a natural for the role.

But not today. When I reached Wiegand last week, she was at home nursing a cold she developed leading tours through the previous weekend’s soggy weather. Despite a harrowing forecast, she tells me, two customers decided they were game to brave the downpour, so she had no choice but to lead them on a route to Faneuil Hall in the driving rain, as her umbrella flapped uselessly in the wind.

“It was absolutely pouring and I had to do a 90 minute tour. I got absolutely drenched. It’s hard to describe. My shoes, which we have to buy ourselves, were completely soaked through,” she tells me. “And a couple days later, I’m very sick.” Adding insult to viral infection, she was required to find her own tour guide replacement to avoid having to drag herself to work, sniffles and all.

Wiegand, who’s been leading tours in character for the Freedom Trail Foundation for four years, says her experience is a common one. That’s why she and her 40 or so colleagues in the historic walking tour business formed a union with Unite Here Local 26 earlier this year, and have been negotiating with the foundation since May. You may have seen them this summer handing out flyers in Government Center, or caught some of their cheeky posts on social media. But as the busy season for tourism winds to a close, the group, which calls itself the Bellringers Guild, still doesn’t have a contract.

It’s a beautiful Sunday on the Trail and we are educating our customers on how we have to do tours sick, aren’t typically allowed to use mics in this loud city, and how there hasn’t been a base rate raise in over a decade #solidarity @uniteherelocal26 pic.twitter.com/qstW5hCxxF

One of their main demands? Microphones. Guides say they want to use them, but management has pushed back, on the grounds that mics and amps don’t exactly jibe with their characters’ bonnets and tricorn hats. “It’s very much understood that we’re discouraged from using them,” says Margaret Ann Brady, who’s been leading tours in the city since 2007. “The idea is that they don’t look very 18th Century.”

If the Freedom Trail’s costumed staff want one, they typically have to collect it from a boss’s office, and explain why it’s needed that particular day. Instead, the union wants mics available to anyone who wants one, whenever they want it. After all, Boston’s historic downtown in 2019 is a noisy place, overrun with traffic and perpetually under construction, so shouting historical factoids over sounds of a bustling city can be grueling work. “I’m a very loud person,” Brady says. “I’m a performer and I do musical theater, and have an extremely strong, well-trained and well-used voice, and even I regularly feel vocal strain. My singing voice is now very compromised from where it was when I started.”

The Freedom Trail Foundation declined an interview for this story, citing the ongoing negotiations, but sent a statement saying, “We respect their right to collectively bargain and to free speech as we continue to work towards an agreement.” The Greater Boston Convention and Visitors Bureau also declined to comment on the negotiations but said it had “great respect” for both the foundation and the “tour guides and public history interpreters that make Boston’s rich and iconic history so accessible.”

The Guild’s recent push for a contract comes as popularity of the guided tours “has exploded in the last few years,” says Brady. She now routinely leads tours of as many as 100 or 150 guests, but says that although she’s gotten a few raises over the years, the base rate tour guides are paid hasn’t gone up since at least when she started in her role in 2007.

Plus, she says, the foundation’s policy for tickets bought through the Go Boston Card is cutting into their paychecks. Guides are paid a flat rate for each 90 minute tour, plus a bonus for each additional person after the first 10. But when customers join tours via the popular discount program, tour guides’ per-person dividend is cut in half. 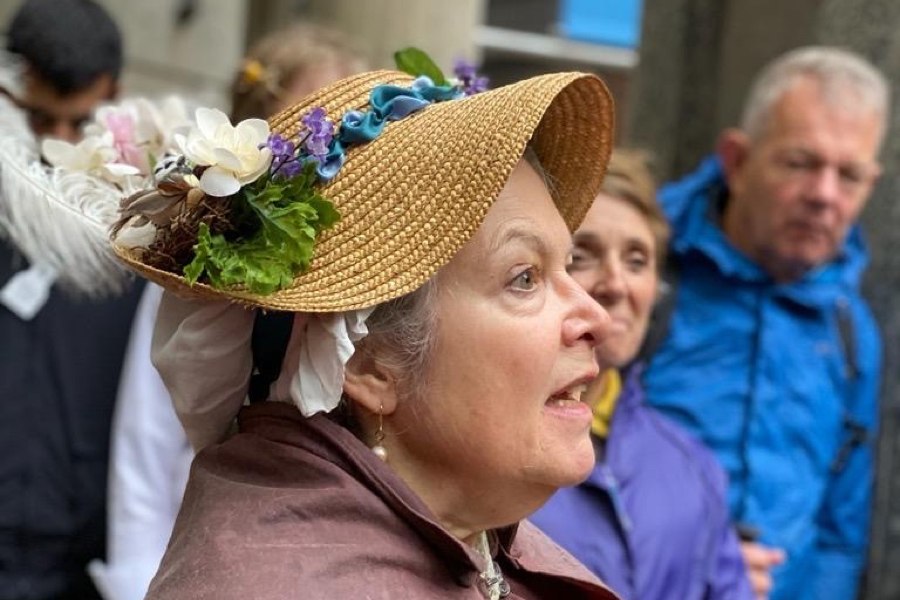 The guides also want to be able to call off tours during inclement weather, like in heavy rain or blizzards, or extreme heat or cold. “In the wintertime, tourists don’t understand how cold Boston gets, and they see us out there, so they assume the powers that be wouldn’t be letting them do tours if it were dangerous,” says Wiegand. “What they don’t know is we do tours when it’s dangerously cold outside. There’s no policy, even in the event of lightning, or in the summer when it gets really hot.”

While they’re taking this effort seriously, the tour guides do seem intent on having fun with this whole thing, and they’ve clearly put their history nerd credentials and flair for drama to use. Their chosen name is a reference to the real-life guild of bellringers at Boston’s Old North Church, which counted a young Paul Revere as a member, and a statement they sent me last week reads like a Colonial decree: “Imagine how guides do shriek and bellow to o’er-top the noise, and how our guests do strain to hear!” part of it reads. “Mayhap a microphone could please both guide and guest … but no.”

They’ve also been making their case on social media, sharing messages that make historical swipes at the foundation (“When your employer thinks revolution against injustice is cool but only when it happened 246 years ago,” reads one snarky tweet), and posting a video of costumed actors discussing the perils of showing up to work stricken with “the pox.”

Would you want a sick tour guide taking you through the exciting history of #Boston? Of course not! Support our newest members, wicked smaht @Bellringers26, tour guides at the Freedom Trail Foundation fighting for their first union contract. Leave a comment @TheFreedomTrail! #1u pic.twitter.com/hrJLECfxqj

That strategy makes sense, given the unique makeup of this particular group of workers, who in many cases rely on the tour guide gig to support careers as artists and performers, or to help pay the bills while studying at local colleges.

“Our job is fun. We love it. It’s such a unique mix of education and entertainment and bonding with complete strangers, so we wanted to communicate that as we talked about the issues that we’re fighting for. Because we all want to keep doing this,” Wiegand says. “It’s a job that enables the creative class of Boston to stay in the city and to thrive and be real, exciting ambassadors for the city. That’s what we’re trying to communicate.”