Are We Living in the Most Corrupt Era of Our State’s History?

Turns out, scandals have been in the news since the very beginning. 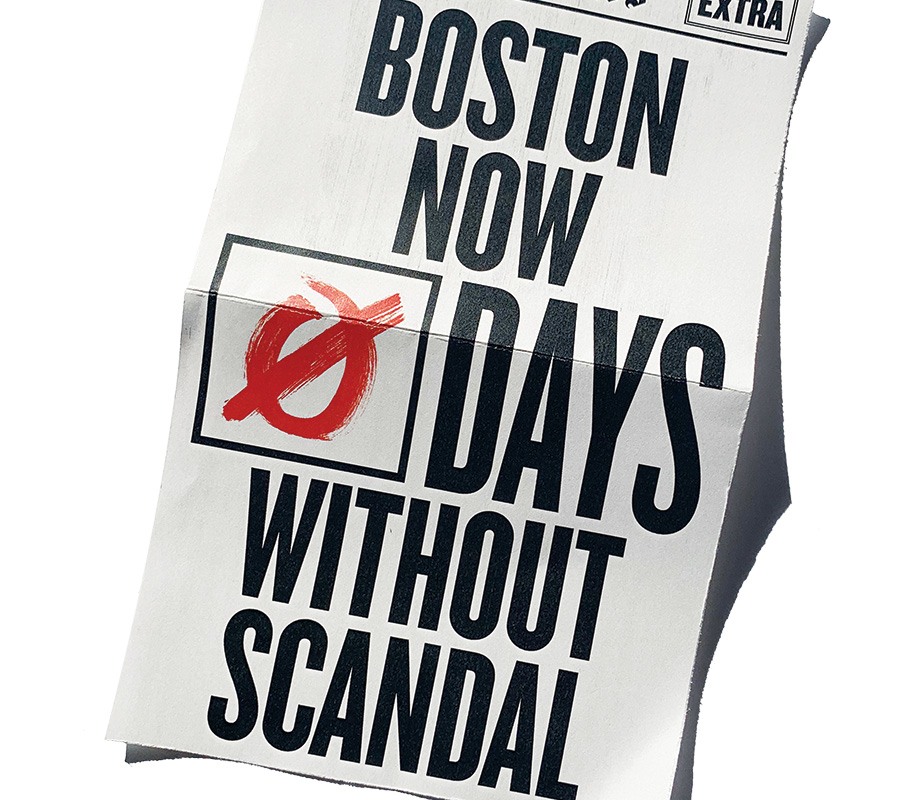 It feels like every day there’s a new story of bad behavior here, whether it’s the Patriots’ scandals, the state troopers’ overtime embarrassment, or the Fall River mayor’s indictment on extortion charges. It seems like everything is falling apart; is this the most tumultuous and corrupt era ever in Massachusetts? —W.P., Weymouth

It’s true, W.P., that scandal and tumult have been in the news quite a bit lately. But you can take cynical solace in the fact that it’s been much worse in the past. I mean, look back exactly a century ago…whoa, things were literally falling apart then. The year 1919 began with the Great Molasses Flood in January, in which 2 million gallons of the sticky stuff rushed through the North End and killed 21 people—largely because of bad tank construction and shoddy oversight. Tension between Boston and its police union dominated the news thereafter, culminating in the infamous September strike that led to looting downtown and the State Guard ultimately shooting and killing five people in the street. The next month, former Boston mayor and future Kennedy paterfamilias John “Honey Fitz” Fitzgerald was booted from the U.S. House of Representatives after proof of voter fraud annulled his election the previous year.

Speaking of fishy mayors, by 1922 James Michael Curley had returned to City Hall for the second of his four nonconsecutive terms, during which time he punched out Boston Telegram publisher Frederick Enwright, who’d dared to criticize him. Curley’s last term during the 1940s featured such corruption that he served five months in federal prison for mail fraud while in office.

As the decades progressed, the turmoil continued: We had the Winter Hill gang wars of the 1960s; the school-busing civil war of the 1970s; the Charles Stuart racial-profiling murder hoax of the 1980s; three state House speakers in a row being convicted of federal crimes in the 1990s and 2000s; and the Catholic Church sex abuse horrors becoming public in 2002. In 2009, we saw contractors convicted of selling substandard concrete for the Big Dig, and this year we’re still cleaning up after the gas-pressure explosions in Lawrence.

So even though we’ve always liked to think of Boston as the City on a Hill, over time it has more closely resembled the Muddy River, clogged with scraps left over as the ethically challenged grab for affluence and influence. Which brings me back to the beginning, W.P.: Yes, scandal and tumult are always in the news, but that’s how it should be. As long as we keep shining a light on these murky waters, then things won’t fall apart.