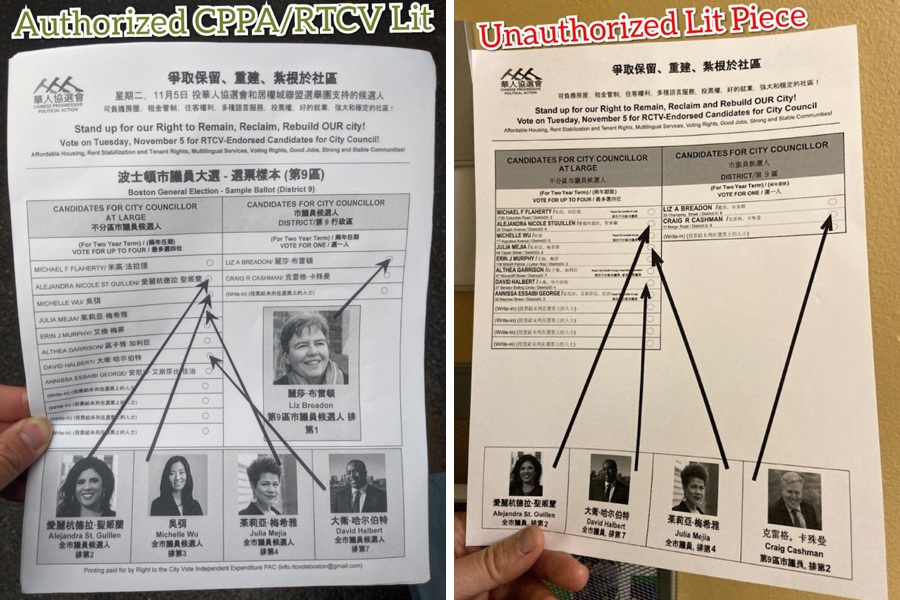 Exactly how this went down has yet to be determined, but a bogus campaign literature scheme on behalf of Boston City Council candidate Craig Cashman sure looks pretty gross.

The group Chinese Progressive Political Action is sounding the alarm after it says it discovered fake fliers in Brighton designed to trick elderly voters into casting a ballot for Cashman. The group shared posts on social media Tuesday that appear to provide the evidence. The first image is of an official flier from the group, which includes text in both English and Chinese and includes a mock-up of the ballot for the election, along with arrows pointing out the names of candidates endorsed by the group: Alejandra St. Guillen, Michelle Wu, Julia Mejia, and David Halbert for at-large seats, and Liz Breadon for District 9, which represents Allston-Brighton. The other photo shows what appears to be a knock-off, using the same format and logo as CPPA’s, but endorsing Breadon’s opponent, Craig Cashman. The knockoff also does not include an endorsement for Wu.

CPPA volunteers discovered the phony fliers at around 4 p.m. inside a home for the elderly on Wallingford Road, as well as at an affordable housing complex on Washington Street, according to Karen Chen, executive director of the Chinese Progressive Association. She says the whole thing stinks. “They were trying to mislead voters,” she says in an interview. “It might have been a desperate act. And for me, I just feel like it really goes against what democracy stands for, and it’s predatory.”

Breadon, a housing activist endorsed by the CPPA in part because she rejected contributions from developers, ultimately beat Cashman 58.5 to 41 in Tuesday’s election.

Although it appears to have been carried out on his behalf, Cashman has denied responsibility for the scheme. “I know nothing about it,” he told the Boston Globe reporter Milton Valencia. His campaign did not immediately respond to a request for comment from Boston Wednesday morning.

Just in: Cashman denies any involvement in this, saying “I know nothing about it,” and is on way to concede to and congratulate Breadon. https://t.co/7ldTufmbK9

Breadon, for her part, reacted to word of the phony fliers by urging her supporters to get out and vote. “I strongly condemn these efforts to manipulate voters,” she said in a tweet Tuesday evening, while polls were still open. “I hope that this negative campaigning mobilizes those to the polls who reject this type of politics.”

I strongly condemn these efforts to manipulate voters. I hope that this negative campaigning mobilizes those to the polls who reject this type of politics. #undaunted #bospoli https://t.co/meiPUcsqKB

Chen compared the apparent trickery to earlier schemes targeting Chinese residents back in 2003, when poll workers in Boston’s Chinatown neighborhood were accused of manipulating voters in the neighborhood, many of whom did not speak English. The controversy led the state to adopt bilingual ballots in 2010. In 2017, the city threw out six absentee ballots after Chinese-speaking voters complained they’d been coerced into voting. She says the CPPA hopes the city election department will investigate this case as well.

“It’s OK for people to support different candidates,” Chen says. “Don’t use dirty tactics. It should be a fair game.”