The athlete and Turkish human rights defender opens up about balancing basketball and activism, what Boston has over New York, and hanging with his favorite Wahlberg. 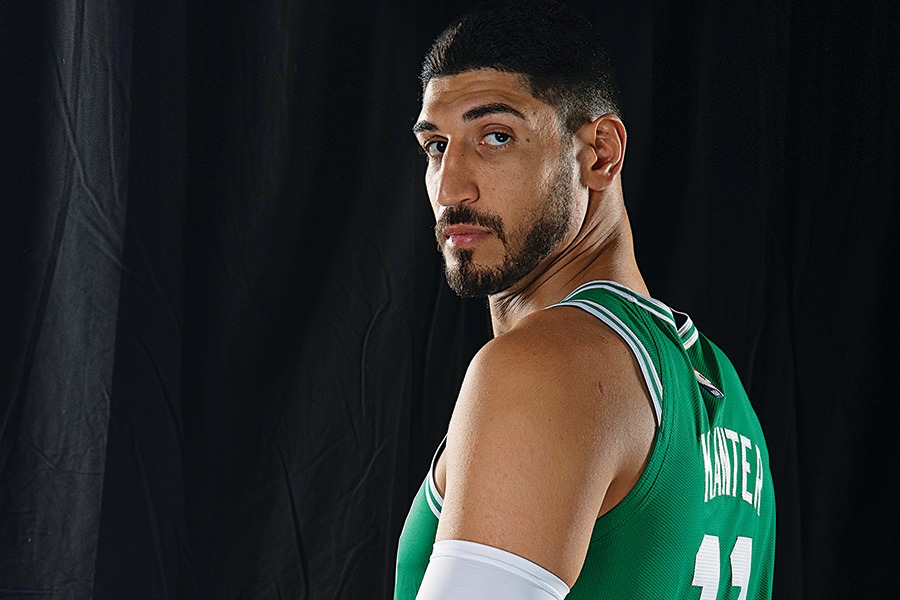 Even before basketball season started, Enes Kanter, who joined the Celtics this year after a split season with the Knicks and Trail Blazers, was giving Boston and the world plenty to talk about. The 6-foot-10 center, Instagram sensation, and sometimes professional wrestler is a fierce and outspoken critic of his native country’s autocratic leader, Turkish President Recep Tayyip Erdoğan, which has landed him in some pretty hot water. The country revoked Kanter’s passport in 2017 and recently issued an arrest warrant for him because of his critical tweets; closer to home, Kanter was heckled this fall by Erdoğan supporters outside a Cambridge mosque. All of this comes on top of his pretty demanding day job trying to help the C’s hoist another championship banner in the Garden. With the season just under way, we caught up with Kanter for a talk about his new life in Boston and the controversy swirling around him.

Turkey is in the news a lot lately, and many Americans are just getting to know who President Recep Tayyip Erdoğan is. What do you think is the first thing everyone here should know about him?

The first thing Americans should know about Erdoğan is that he is a democratically elected dictator. He is familiar with dirty politics, and he abuses his office and his power for personal and family gain. I think that’s enough to know about him.

What’s your relationship with Fethullah Gülen, the Muslim cleric living in exile in Pennsylvania whom Erdoğan blamed for inciting a failed 2016 coup attempt?

During the off-season, I try to go visit him every three to four weeks. He is a peaceful educator and scholar who has dedicated his whole life to the betterment of humanity by opening thousands of secular schools all over the world and establishing charity organizations and dialogue centers. As a Muslim scholar, his message of peace and understanding is for all religions and people of different faiths. And I think his message and values really go with how I think about life.

I take it Erdoğan doesn’t like you very much.

Why would he enjoy someone saying he is a dictator who manipulates people for his own benefit? I have a big platform, and when I say something on social media or give an interview about Turkey, I think that really sickens him. People know my story because I play in the NBA, but there are thousands and thousands of stories out there that are way worse than mine. I’m trying to use my story to be the voice of their stories.

That’s a big responsibility, and it’s cost you in the past. Your father is currently on trial in Turkey for his alleged links to Gülen, and the regime has even targeted people who simply supported you on Twitter.

So how do you balance all of this?

Do you know any other athletes who are doing something similar?

In America, Colin Kaepernick is the first person who popped into my head. He is the only athlete I know of who uses his platform to amplify his message on human rights, even though he basically lost his career over it. Not many players in the NBA or NFL or other leagues want to get into this stuff. Because you have to make a lot of sacrifices, and a lot of people only care about their career, the next place they are going to sign an endorsement deal, and the money. For me, human rights issues are bigger than anything I am doing.

When it comes to your job, though, what kind of season do you think the Celtics are going to have?

I feel like we have a very special team that can beat every team on every court if we build a strong chemistry and play as one. The number one thing is chemistry. The better friends we become, the better team we are going to be, so that’s what we are working on right now. And it’s been amazing. We are four weeks in, and if you ask anybody, they will say it feels like we have been playing for years. It’s going to be an exciting season.

What is your role in building that chemistry?

We are not going to win 82 in a row. Everybody knows that. So whenever things are going wrong, it’s very important to be that guy who brings positive energy, who is good in the locker room and lifts people up and tells them to learn from their mistakes and keeps things moving forward. It is especially important with the rookies, and we have a lot of them. I’m trying to help them as much as I can.

You just moved here from New York. How is it different here?

Here’s the most important question: Have you found a good place yet to get Turkish food?

Wherever I go, even places we go on road games, the first thing I do is look for Turkish restaurants. But I can’t go to every Turkish restaurant, because I don’t know if they are going to be on my side or if they are pro-Erdoğan. So I send my friends there first to see if it’s okay for me to go or not. But yeah, there’s this one restaurant called Café de Boston. It is very clean, with very high-quality meats. When I go there I feel like I am home because it is really close to the taste of the food in Turkey.

Is there one thing on the menu you would recommend?

I think the most famous Turkish dish is doner, which is like Turkish gyro. I have been doing a lot of cheat-day Instagram videos, and I did one there at that restaurant with my teammate Tacko Fall. He loved it.

We are a city with a really proud music history. Do you have a favorite Boston band?

Well, I don’t think I’ve ever actually heard his band, but I was just with Donnie Wahlberg last night. He is an amazing guy, down to earth, very smart. He is my favorite guy. So I’ll say his band is my favorite.

Do you guys hang out? What do you do?

When he was in New York filming Blue Bloods, I went to hang out with him twice there. We had a charity event yesterday that he came to and I was there, too. He’s a good man; I like him a lot.

Speaking of hanging out in Boston, do you have a favorite spot?

It’s only been like four or five weeks, so I’m still trying to find a place to go. But when you come to a sports town, you just want to experience it all. That’s why I go to a lot of games. I went to a Patriots game and I went to a Revolution game, but I have not gone to see the Bruins and Red Sox yet.

You mentioned the Revolution. Is it true that you originally wanted to be a soccer player?

Yes, when I was growing up. And it didn’t work.

It seems like it turned out okay for you.

Yeah, I am glad it didn’t work.

You’ve had one particularly thorny experience since you arrived in town, getting heckled outside a mosque by Erdoğan supporters. What was the reaction like here in Boston?

I have so many supporters from all over Boston. Joe Kennedy texted me, Elizabeth Warren’s office, Ed Markey tweeted something. I heard from senators, representatives, teammates, coaches, and fans. I was like, Wow, this is so special, because I am not from here, I am from Turkey, but all of this support made me feel like this is my home.

Did Turkey revoking your passport make you feel differently about making a home in a new city?

It happened in 2017 and I was like, man, I literally have no home. People were calling me and saying, “Hey, man, you’re homeless.” I didn’t have American citizenship, but I had my green card, and you have to wait five years to get your citizenship after that. I remember I attended this really big show and this person said, “Do you know that it’s five years, but if you get married to an American, it’s only three years?” I said, “No. I didn’t know that, but that’s cool.” The next day, I was getting all these marriage proposals. There were all these social media videos of women saying, “Hey, I’m an American citizen, if we get married it’s only two more years. Let’s do it.” I was like, “Oh my God, I’m just gonna wait.” I’m going to become an American citizen in 2021.

I saw that you participated in a World Wrestling Entertainment match. How was that experience?

It was just so fun. They asked me if I wanted to be a villain or a hero, and I’m like, “A villain!” They said, “You’re going to be the most hated man in New York that night.” I was like, “I’m ready for this, let’s do it.” It is more fun to play the villain. You get all the boos, you get in people’s faces and talk trash to them. I’m even thinking of becoming a WWE wrestler after basketball.

What would your name be? I’ve heard you float a couple, including Turkish Delight.

You know, I haven’t figured it out yet. People are saying I can’t be a villain and call myself Turkish Delight. It’s too soft. I think Enes the Menace is a good one. I need to think about it. I know a lot of great people from WWE, and I am sure they help with that once you get there. But I have to finish my basketball career first.

Well, for now we’re all excited that you are here.