Is Emerson College the Smartest Developer in Town?

As the school wraps up a massive facelift on the Common, it just may have cracked the secret to building in Boston. 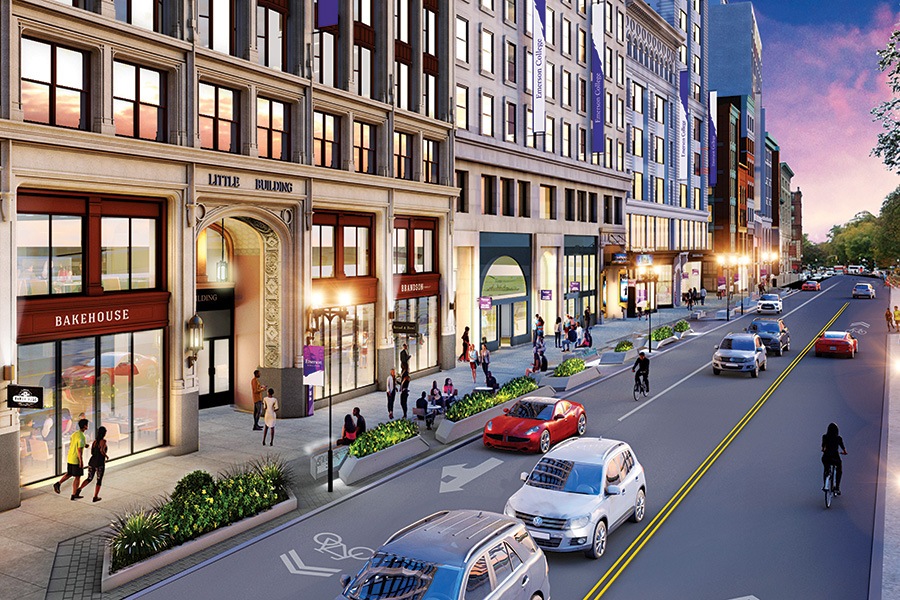 I was walking along the Common earlier this month and caught myself pausing for a moment, blinking at the intersection of Tremont and Boylston and wondering what, exactly, felt so different. For the past decade or so, the intersection has been a warren of scaffolding, torn up by jackhammers and clogged with construction, and suddenly the dust has started to clear. But while most other construction projects—and there are a ton of them in Boston right now—seem to yield towering glass boxes, this onelooks, well, a lot like Boston, only maybe a bit nicer. The ever-crowded sidewalk is being widened (at the cost of a lane of road) to give it a boulevard feel. Half a dozen restaurants are getting ready to set up shop. And soon there will be a floor of dedicated hotel-style conference rooms for companies to use. These aren’t drastic changes, but they make the whole block seem more welcoming. In fact, they’re the kind of changes that make you wonder: Why doesn’t more of Boston’s building boom feel like this?

One reason is that the developer that’s remaking this little corner of downtown isn’t really a developer at all—it’s Emerson College, which has been slowly moving into the Theater District from the Back Bay since the 1990s. As both a tenant and a landlord—a rarity in developments—the school has a different set of priorities: to thoughtfully improve the area and be a good neighbor. “We’re not simply building for Emerson,” says school president Lee Pelton, adding that the intention is to make that corner of the Common a destination, with food, theater, and services that benefit everyone. “If I may borrow a phrase from the great Reggie Jackson, Emerson is the straw that stirs the drink.”

None of what Emerson has done here is bleeding-edge, but that doesn’t make it easy. The decision, for instance, to mostly rehab existing buildings—centering on, but not limited to, the Little Building on the corner—has spared the neighborhood the sense of being overtaken by the new, while decidedly adding to it. So too with the decision to make the street friendlier to pedestrians and bikers. “The roads that surround our parks function more like highways,” says Elizabeth Vizza, executive director of Friends of the Public Garden, who approves of Emerson’s plans to widen the sidewalk and add a crosswalk, not to mention add more greenery (though she hopes the school commits to properly caring for whatever it plants). The new construction also expanded the number of beds Emerson is able to provide, which means there are 280 fewer students hunting for housing in Boston, fulfilling a longstanding ask from the city to help mitigate the housing crisis.

This isn’t to say that new buildings in Boston shouldn’t look and feel new. There’s certainly no “cookie-cutter solution” to how to develop, says Karilyn Crockett, an urban planning lecturer at MIT and a former economic policy adviser with the mayor’s office. “If there were a governing principle, it would be to really encourage developers to put themselves into a conversation with folks who’ve been [in neighborhoods] for the long haul.” My point is that Emerson’s neighborly spirit is something that can be an inspiration to commercial developers if they desire. While it makes sense that private developers want to erect buildings that make a bold statement—after all, hundreds of millions of dollars and years of work go into these projects—if the plan is to build for the future, it’s equally important to create something that feels welcoming. After all, people don’t just buy condos and office space, they buy the neighborhoods that go with them—and wouldn’t it be nice if they still had a little of their soul?