You can select "X" on your Massachusetts drivers license. 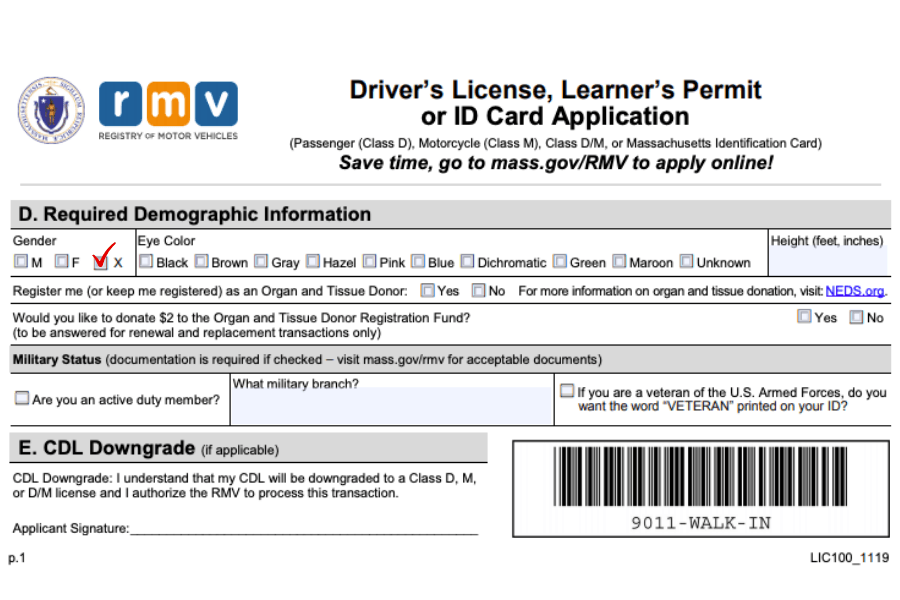 In a big step toward inclusion for non-gender-conforming residents, the RMV now allows Massachusetts residents to choose among “male,” “female,” and “non-binary” when designating gender on Massachusetts IDs. With this update, Massachusetts joins at least fourteen other states, including Vermont, Maine, and New Hampshire, in offering a gender-neutral option on state driver’s licenses.

According to MassDOT, the change took effect this week following a major upgrade of the RMV’s software over the weekend. These three designations will be available for new state licenses and IDs, as well as renewals and amendments of old ones. Previously, the state allowed residents to change their genders on their licenses, but male and female were the only options available.

“It is an important step towards letting people be who they are,” Massachusetts Senate President Karen Spilka said in a statement Tuesday.

Legislation regarding the inclusion of a third gender on state documents has received overwhelming public support at public hearings over the past few months. Proponents have said identity is a fundamental human right, and that limiting gender designations to male and female creates a safety risk for non-binary people. A non-binary person could be rejected or publicly outed upon presenting their license because it doesn’t adequately reflect their gender.

“Although my whiteness and my masculinity offered me a lot of protection, I still worry that when I hand my license over to a TSA agent, a clerk at the grocery store or a law enforcement official, that the difference between the person they see in front of them and the gender marker on my license will result in unjust treatment,” Ev Evnen, the interim executive director of the Massachusetts Transgender Political Coalition, said last year, as a “Gender X” bill was passed along to the Massachusetts House.

The few who have pushed back against similar legislation, like GOP chairman Jim Lyons, have said that the inclusion of an additional gender legislation could be confusing for law enforcement and put public safety at risk.

Mass. representatives Marjorie Decker and Mindy Domb, both of whom have strong records of advocating for the LGBTQ community, both commended the RMV on Twitter for taking this step forward. However, they also reminded their followers that they have co-sponsored a bill proposing that all state documents—not just licenses—should provide a third gender option. Their bill was referred to the Joint Committee on State Administration and Regulatory Oversight in September.

And @MindyForMA and I filed a bill that would ensure all state documents give the same option for #nonbinary. Govt shouldn’t force people to lie about their identities. https://t.co/lQ9La8Kivc

Ensuring options that reflect all of our residents isn’t hard. It’s basic respect. So glad that @MassRMV is leading the pack. And thankful to the advocates who have worked so hard for this – shout out to @GLADLaw @massequality and others. #Visibility4All https://t.co/8nTiQUSIMx