Winter Is Good, You Cowards

Yes, it’s cold out. No, that’s not terrible. 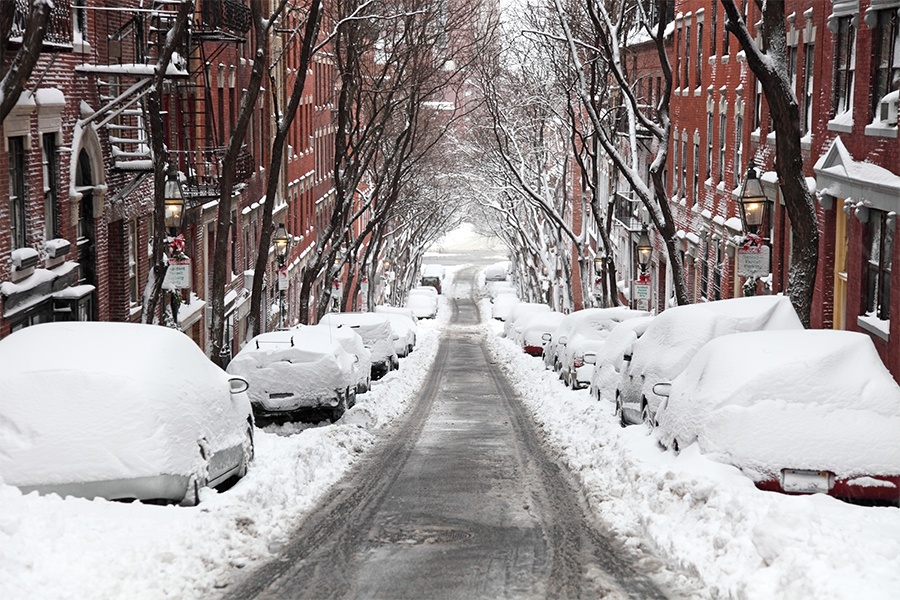 We haven’t even made it to the time of year when we argue about whether Thanksgiving is better than Christmas and find ways to subtly drop Mayflower heritage (ahem), and it’s already goddamn freezing outside. We’ve turned the clocks to whatever time makes it dark forever. Fall was basically just a montage of foliage and now it’s over. Today, we might break the record for the coldest November 13 on record, which is both arbitrary and terrible. All across the city, people are probably wondering if they’ve already missed the cutoff for cuffing season. Usually, we ride manic holiday euphoria through the first cold weeks, but whatever, the climate is screwy [Editor’s note: in a state of catastrophic spiral] and now it’s freezing and I’m calling it: It’s winter now. And, from what I can tell, people aren’t happy about it.

But you know what? We live in Boston, where it’s winter like eight months of the year. Winter is practically the point of living here. And winter is good, you whinging cowards. I’ll tell you why.

First, let’s call this complaining about how it’s cold and maybe you’re feeling preemptively “crushed” by the first twinges of seasonal depression what it really is: sport. As New Englanders, we’re happiest when we have something boring to complain about, like traffic or our crumbling rail infrastructure. Nothing makes us happier than this, except maybe screaming at a stranger about how our sports teams did a thing better than their sports team, and so they, personally, suck and can go suck it. But, that aside, complaining about the weather is what we live for. And yeah, sure, summer can be “muggy” and it sometimes rains for a month in the spring, but winter is pretty much one long bender of insanely boring complaints. “Did you see the wind chill this morning?” “Here, let me show you where the snow line is on my phone, because it’s going to rain and then snow, so there’s going to be ice, which means tomorrow’s commute is going to be slippery.” It’s a New Englander’s nirvana. Dads across the state train all six weeks of summer for these moments. Point is, the more kvetching you hear, the more solidly winter gets pushed to the “good” column.

The good parts of winter, however, go beyond the simple joy of bitching about things—there are honest to god pleasures to be found. For starters, it’s the only season that we actually know how to dress for. Flannels. Bean boots. Other kinds of boots. Sweaters. Wool coats. Sweatshirts, I guess, if you’re into that kind of thing. Sartorially, the lightly prepped winter outfits that dot the streets here are maybe the only trend that we’ve successfully exported to other parts of the country. Especially sweaters—we do sweaters almost as well as the Scandinavians, man. And once you’re kitted up and you brave the bitter wind and cold, you get the joy of warming up by walking, earning the heat. Sure, maybe the snot in your nose just froze, but each step is a minor victory over the elements. Is there anything more Yankee than having to work for a small pleasure that is actually just sort of fine? If there is, I don’t want to hear about it.

The various goods of winter don’t hit you all at once, though. They unravel slowly.

Now, most people divide winter up into two distinct periods: The holidays, and the long dark misery that follows. Conventional wisdom holds that the holidays, which start in a few weeks, are the cheery part of winter because you get to eat cookies and drink irresponsibly and those white lights everywhere look pretty in the permadark. Also, people like their families (sometimes) and the holidays are when most folks try to lean into that, even if the weeks of booze and sugar almost certainly mean none of us are at our best. As a rule, the grimmer the weather, the more cheer goes into celebrating holidays—Christmas in London started at the end of October, for instance—and Boston is no exception. There’s singing, celebrating, obligatory holiday spirit—the city puts on its best face. And while this part is nice, it’s sort of the obvious nice part of winter.

The best part of winter, though, is the most maligned bit—the dark months of post-holiday crash. (See point one, re: complaining means it’s good.) Sure, maybe you swear you’re going to get back into shape and then totally flake out three weeks in and spend the rest of the winter hibernating, but that’s the point. This is the antidote to the hours we spend every summer sitting in Cape traffic or meeting up with friends six days a week—it’s the time of year when you’ve got carte blanche to cancel on plans, make some tea, and stay on the couch, resting for your reemergence in the spring. Moreover, if you do manage to, say, go to your friends’ apartment for dinner or go for a run, you get to shroud yourself in glory simply because it’s cold. Casting the basic daily tasks of a functioning adult as heroic achievements is more or less what I do all year, but we have an entire season here where we collectively buy into this mindset. It’s perfect.

Of course, there are downsides to winter here. New Year’s Eve is an objectively horrible holiday and should be done away with. Being forced to hear about people’s commutes, as opposed to complaining about your own, is mind-numbingly boring. The cold, though bracing and virtuous, is often unpleasant. Other than that, though, winter is great, and I hope it lasts forever.