“Hey, Mickey!” This Guy’s Video of Mice Taking Over an East Boston Dunkin’ Is an Instant Classic

"Duuuunkin' Donuts. It's worth the trip!" 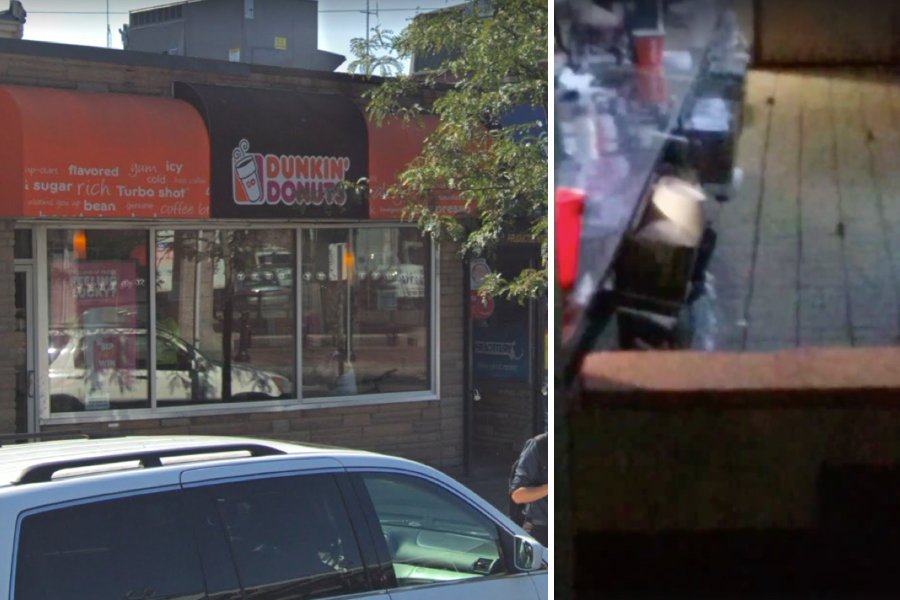 East Boston’s Peter Wild was taking an evening walk through Maverick Square Monday night when he gazed in the front windows of the neighborhood Dunks and spotted something—make that several somethings—scurrying across the coffee shop’s tile floors.

In what he says was just a few minutes after the shop closed up for the night, he spied at least a handful of mice scrounging for scraps. Horrified, he pulled out his phone to record his discovery. “Let’s zoom right up to ’em. Look at ’em runnin’ around like they own the place!” he can be heard saying as he aims his cellphone camera at the small armada of mice, adding an improvised jingle in a sing-song voice, “Duuunkin’ Donuts: It’s worth the trip!”

He uploaded a pair of hilariously narrated videos to Facebook that night, where they’ve since been viewed more than 20,000 times combined. They’ve also caught the attention of the city’s Inspectional Services Department, which said in a statement it launched an investigation after seeing the clips and discovered multiple violations in the shop. In a statement, Dunkin’ says health and safety “is our top priority” and that the franchisee who owns the Maverick Square location will keep it “temporarily closed until the issue is corrected.” Video shot Wednesday morning shows workers carrying heavy-duty cleaning equipment into the shop.

Despite being grossed out by this revelation, I have still watched Wild’s videos roughly a dozen times so far, and honestly you should too.

“Look at right here, right up front!” an enthusiastic Wild can be heard saying in one of them, pointing out a large rodent running near the shop’s front window as a small crowd laughs along with him. “Look at him runnin’ around! He’s gonna have a seat, charge his phone.”

Later, he can be heard trying to pin down exactly how many mice he’s spied inside the shop. “There’s a whole family of ’em! Look at ’em all runnin’ around down there!” he says. “There was a hundred of ’em!”

In the background, someone else can be heard offering a more conservative estimate: “There was like six or seven of ’em all fuckin’ be-boppin’ around.”

“Hey, Mickey!” Wild exclaims at another point in this short, exquisite piece of Boston cinema, then adds in another made-up slogan for this Eastie branch of the coffee chain before signing off. “Dunkin’ Donuts, Maverick Square: Come and get ’em!”

Reached by phone, Wild tells me he’s glad his videos are helping clean up the local Dunks, and that people are getting a kick out of his commentary in the clips. Apparently he’s had a reputation for this kind of thing for most of his life. “I tell people I don’t know, ‘Hold on to your seat because I don’t know what’s going to come out of my mouth from one moment to the next,'” Wild says.

He’s no stranger to entertaining people on Facebook, either. Turns out that in addition to being a community activist who posts about weekly “peace walks” through Eastie, he’s also a skilled diver who goes by an alter ego: The Boston Harbor Diver. For the past two years, he’s maintained a Facebook page with more than 150 followers, on which he posts photos and videos of himself, well, diving into Boston Harbor. It’s a hobby he picked up around the Fourth of July a few years back, when he entertained a group of onlookers on the Esplanade by diving into the Charles River and was thrilled by the response. “I had a crowd of 3,000 cheering for me,” he says. So “it became an obsession.”

Wild used to be a regular at the Maverick Dunks and had been spending some time there recently while journaling and working on an autobiography. But he insists that after seeing all those mice, those days may be over.