Escaping a Haunted Submarine? Warren’s Got a Plan for That

The Democratic presidential candidate teamed up with Desus & Mero in a Trapology Boston escape room. 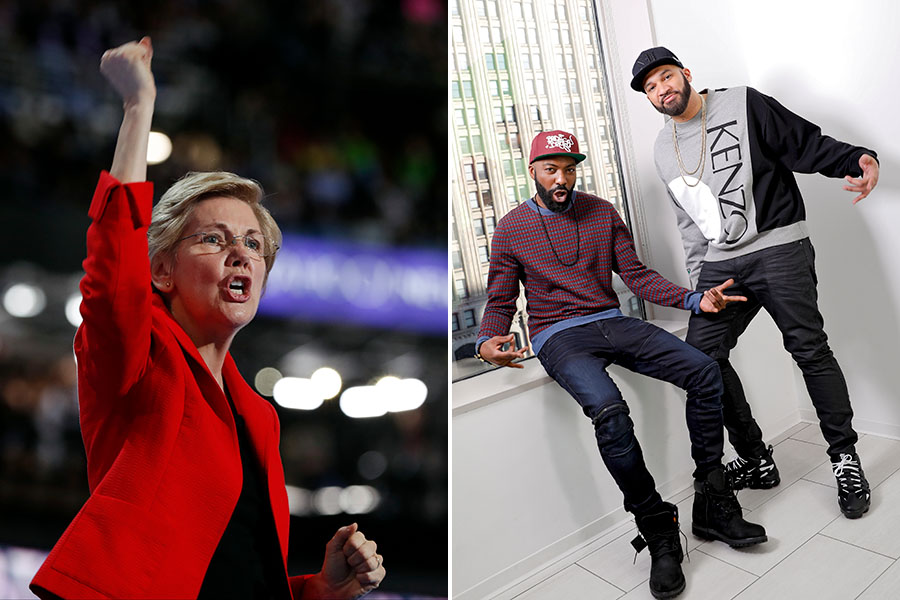 “A couple of podcast hosts and a presidential candidate walk into an escape room” sounds like the beginning to a bad, peak-2019 joke—but it’s also what actually happened on the season finale of Showtime’s Desus & Mero last night, when the eponymous hosts invited Elizabeth Warren to join them in a downtown Boston escape room.

Desus Nice and The Kid Mero, as they’re known to their fans, have hosted several of the presidential candidates on their new late-night show. They shot hoops with Cory Booker. They helped Bernie Sanders select some new kicks. It was only a matter of time before it was Warren’s turn for the Bodega Boys treatment.

After a brief interview in which the trio talked healthcare, housing, and whether or not the senator gets hangry on the road (she does), Desus, Mero, and Warren enter their chosen escape room: Trapology Boston’s “Crush Depth” game, in which participants are trapped on a haunted submarine. The room is ranked as the hardest of the six that Trapology offers. Here’s the backstory: A ghost captain, whose very creepy voice periodically plays through speakers in the room, is apparently upset because he thinks Warren, Desus, and Mero are the crew who staged a mutiny that led to his demise. To escape, the trio must disarm the ghost’s torpedo and direct the submarine back up to the surface—all within the course of an hour.

With her cardigan sleeves already neatly rolled up, Warren dives right in, unflappable even when gasp! the submarine immediately loses power! Right away, she begins both shouting out ideas and shining a flashlight to help Desus and Mero search for clues. Before long, they’ve solved their first puzzle, opening a combination lock.

“Oh man, are we off to a start!” Warren exclaims, high-fiving her team.

Do the “Future Presidents of America” (as they dub themselves) successfully escape the haunted underwater vessel? You’ll have to watch the rest of the video to find out. As you watch, though, make sure that the symbolic meaning of this escape room’s narrative isn’t lost on you.

“If they had paid the sailors their wages, this never would have happened,” Warren says as she reflects on the experience. “Fair wages.”